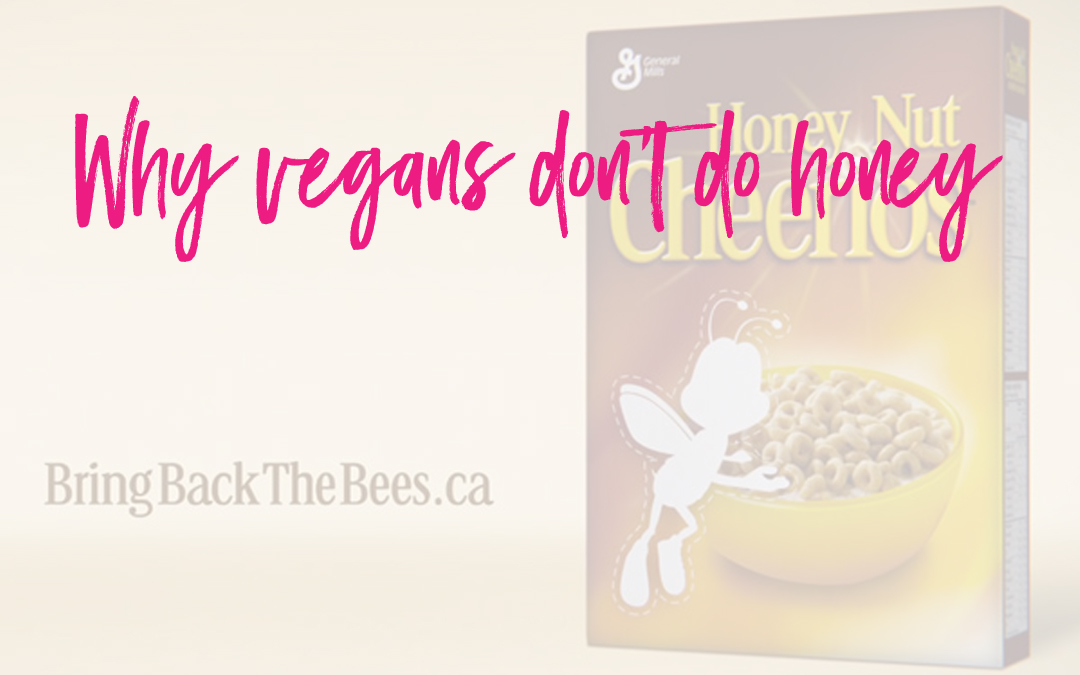 Or, how we can save humanity by leaving the damn bees alone

Listen to this post on the Plant Based Briefing podcast here.

Here’s my next blog on honey, following the first post on dairy in my series on why vegans don’t consume certain animal products. And — I swear I didn’t do this on purpose — but it’s a sign. It’s Pollinator Week in North America!

Honey is one of those items I didn’t really grow up enjoying. Despite my mom saying it was healthier than sugar, she’d dump a teaspoon of white sugar with her coffee daily, so I felt she was being hypocritical.

The one thing I’ve relied on honey for is when I have coughs & colds — a teaspoon in hot lemon water usually does wonders for the throat.

The honey argument is more fuzzy than the dairy one, because honey seems to be a natural by-product of bees that just seems to “be there” for the taking. I’ve got a friend who wants to start an apiary in the interior because there’s apparently a lot of money to be made there locally from bees. So what’s the big deal?

Reason #1: Decline of the bee population (and eventually humans)

The Guardian broke down the commercial production process of how honey’s made. It involves replacing the nectar that the bees have worked so damn hard to make, with sugar water solution, which has zero protective properties and causes disease in bees. Agricultural pesticides also harm bees (through hive abandonment, paralysis, or death) in addition to other insects. I didn’t even know it was possible to mass-breed honeybees, but apparently we’ve have managed to do that too.

All of this has contributed to the decline of the honeybee population globally, or Colony Collapse Disorder (CCD). Some bee species have already been added to the endangered list.

Just as I was writing this post, a friend posted on Instagram about how she saw dead bees in Mexico. I’ve seen one or two before, but never a mass of them. I imagine it sucks.

Think bees aren’t physically being harmed in the production of honey? Large-scale beekeepers even clip the wings of the queen bee to prevent swarming, or replace the queen with a younger model. How f*cked up is that?!

Does anyone remember the episode of The Simpsons in which vegan Lisa fights against the extinction of Springfield’s bee population?

I need a refresher too.

I’ve heard it once before, but now we need to repeat it to everyone we know.

If the bee population died tomorrow, humans would only have four years to live.

If the bee population disappeared, we’d lose all of the plants that bees pollinate (70% of crop species feed 90% of the world), starting with the loss of almond trees and ultimately resulting in half the fruits & vegetables in our supermarkets gone. And I’m already pissed off when the eggplant or zucchini is out of stock at Famous Foods.

If you want to get apocalyptic about it, first, food would get super expensive so only the wealthy could have it. Grasslands would turn into deserts, landslides would wipe away villages, and the Earth would look more brown than green. The final meals of the last humans alive would be the most bland diet…so that’s not even a dignified death, IMO.

What’d we wear in our state of food deprivation? Not cotton, since cotton grows from pollinating plants.

Also, no more clean energy: Biofuel relies on canola oil, so we’d need to rely on fossil fuels again (and, why would we want to go backwards?).

Don’t forget about all the animals that rely on plants for food — would you want to clean up animal carcasses? I shudder when I see dead birds on the sidewalk.

As if your imminent death wasn’t good enough of a reason not to consume honey, there are a few more in the short term.

Below is the trailer of Episode 1 of Rotten on Netflix, which I’m glad I saw. One of the main points I remember in the episode is how most of the honey that’s sold to North America and Europe is actually from Asia, and half the bottle or jar isn’t actually honey. Damned our addiction to sugar!

Like much of the produce we eat today that’s travelled hundreds of miles to get to us, reducing the impact of the honey industry is one way we can combat climate change.

Even if we didn’t harvest honey, climate change would still be f*cking up the pollination process: Flowers are opening before bees emerge from hibernation, leading to a decline in pollination. In other words: Climate change will eventually cause starvation!

Fortunately, there are solutions to our greedy and ignorant ways emerging, and this is the last reason why we don’t need to consume honey:

There aren’t very many right now on the market from what I can see (there’s a business opportunity for you!), but here’s a video of Vegan Bee Free Honey by Prism Nutrients in Vancouver.

Not only can we save the bees and prevent climate change, but the alternative product can be good for our health!

This is available on VeganSupply.ca or Amazon in Canada or the USA. 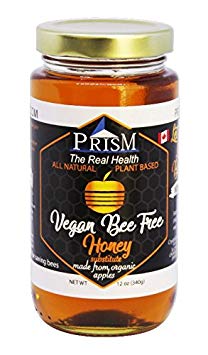 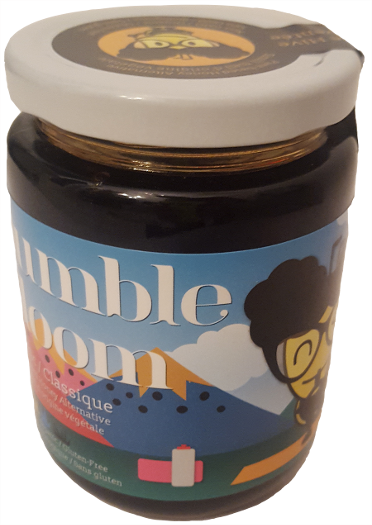 Bumble Bloom is the first alternative that I came across at the Veg Expo a few years back. They have four flavours, and even though they didn’t taste exactly like honey to me at the time, I’m sure I could get used to it.

Bee Free Honee is only available in the USA, but I love the spelling of “honee.” Similar to “mylk,” they’ll avoid harassment from all the large-scale honey producers going after them for false claims. BRING ON THE HONEE!! 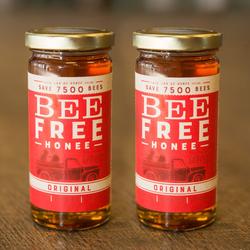 Don’t even get me started on the bee pollen

I almost got away with not researching the latest health trend, bee pollen! One of my former clients always asks for it at Glory Juice, which ironically puts bee products in its some of its nut mylk drinks.

Humans have managed to fuck up this beautiful and natural process pretty bad too, all so we can get “nutrients” we’re too lazy to derive from other plant sources. 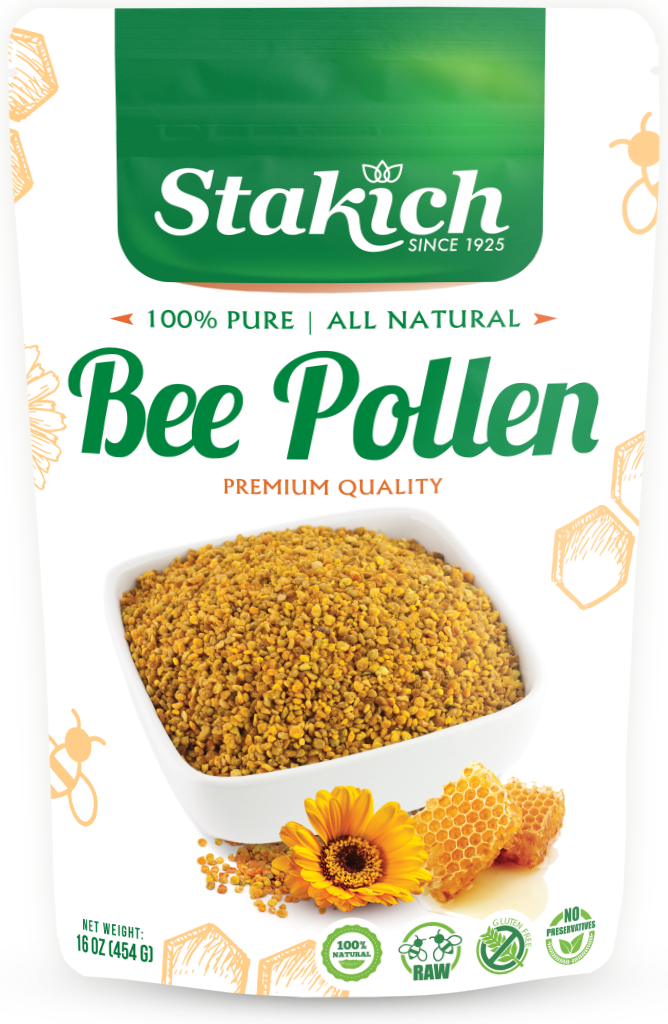 Bee pollen is pollen that’s foraged by bees from multiple plants and flowers (not just one – they work damn hard to collect that shit). The bees store it in the nest, where it’s either consumed or fermented to make bee bread, which includes honey. Beekeepers collect the pollen with traps that fit over the entrance to hives, knocking the pollen off the bees’ legs before the bees enter the hive. Beekeepers then extract the pollen from the trap quickly to prevent the pollen from moulding. As you can imagine, these traps cause stress and a reduction in the colony’s population growth.

IMO, it’s too much work to disrupt the bees to make a product that isn’t really a miracle cure for humans — most of the research has been done on animals so far. In addition, those who are allergic to pollen can have severe allergic reactions if they consume these products, even less than a teaspoon worth. For this reason, children and pregnant or breastfeeding mothers are advised not to consume it.

In other words, don’t spend your money on that damned bee pollen!

How else we can help the bees

Aside from just avoiding bee products, I came across quite a bit of info on what else can be done to help the bees (and ultimately ourselves):

At the time I was writing this blog, I happened to walk by Main Street Honey Shoppe in my neighbourhood to see if they carried any vegan honey alternatives, but they do not. I hope they consider it at some point to be more inclusive of plant-based eaters!

If you made it to this point, what are your thoughts? Will you still continue to consume honey from bees? Please comment below!