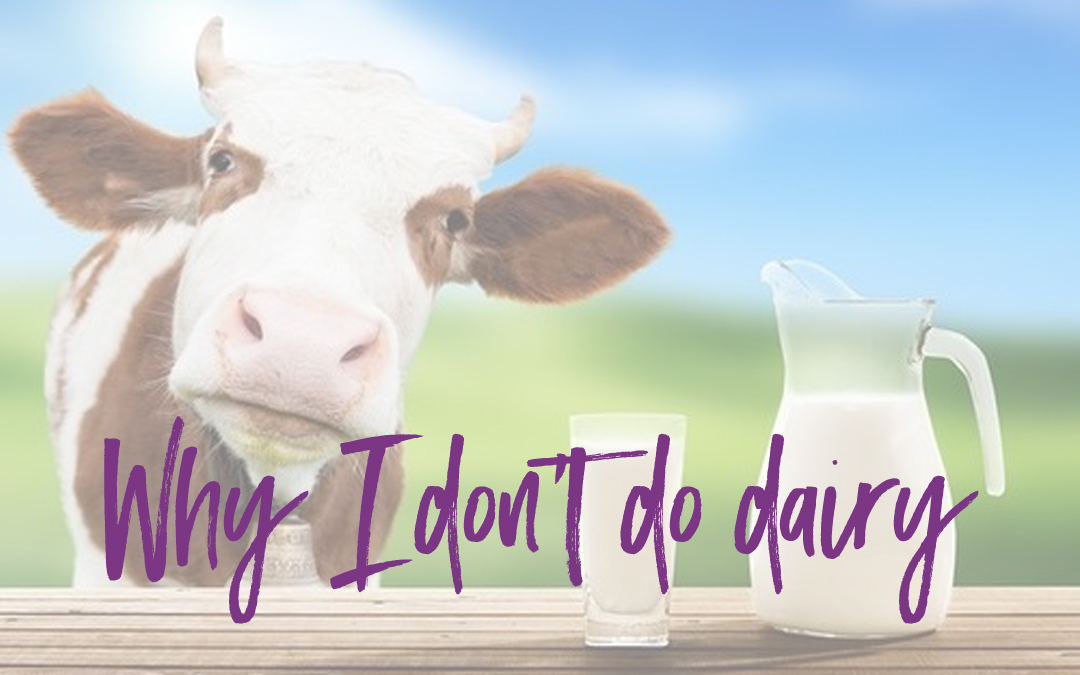 Or, why animal milk does NObody good

This is the first in a series of three (maybe more) blog posts on why vegans don’t consume certain animal products that appear to be harmless. This is as much for my own education and knowledge as it is yours, so I hope I don’t sound like I’m preaching. I’m all about knowledge as power, because a lot of the reason why horrible things happen in this world is because people just don’t know any better. It’s why it took me 25 years to actually start changing my eating habits, which ultimately led me to becoming vegan. 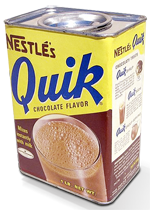 Probably just like you, I grew up with a myriad of TV commercial ads about why (cow’s) milk was healthy to drink. One of my favourite food memories as a child was mixing Nestle’s Quik (later called Nesquik) powder in a glass to make either chocolate milk or that sweet, artificial AF strawberry version. Anyone remember this shit? 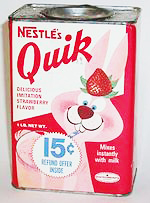 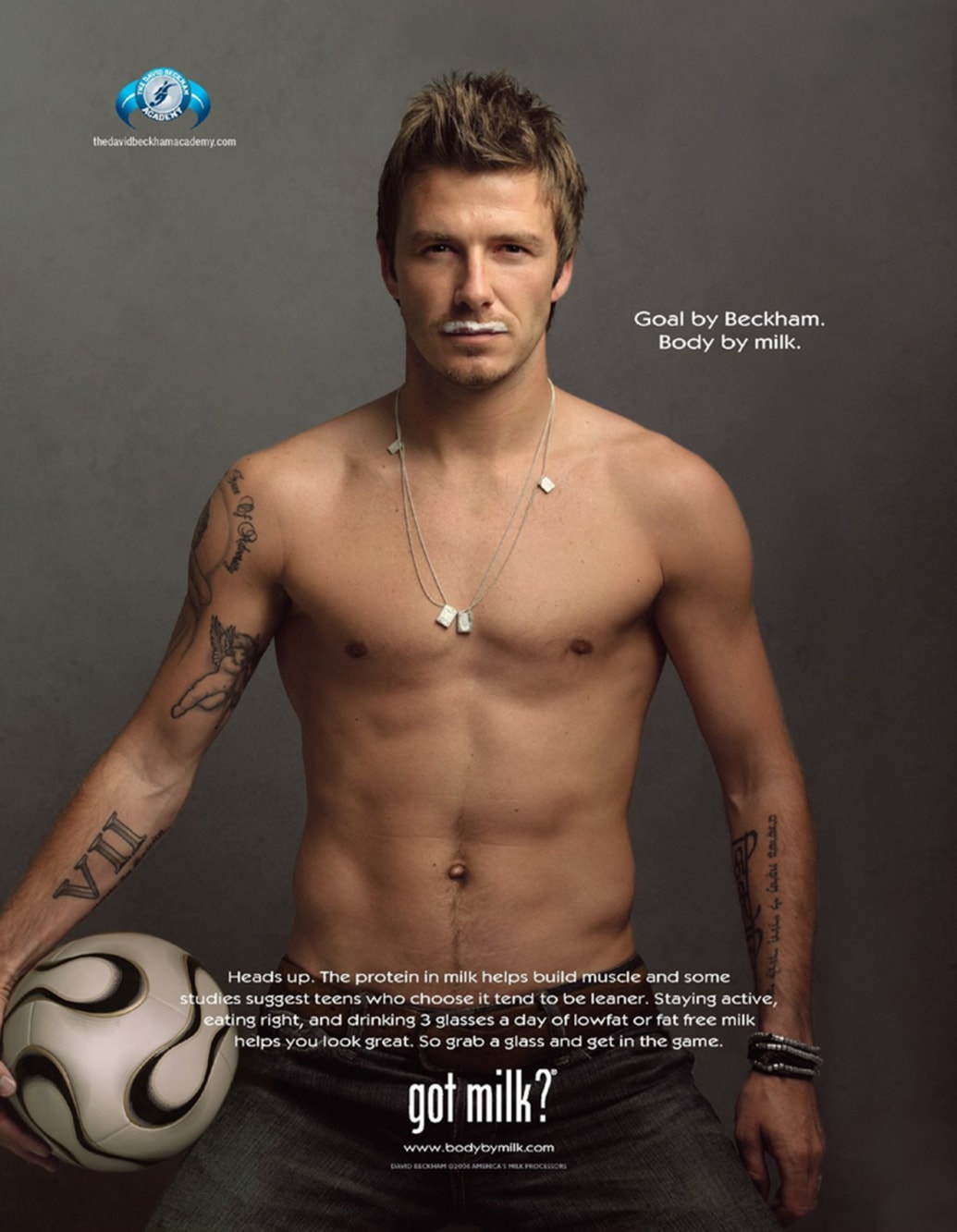 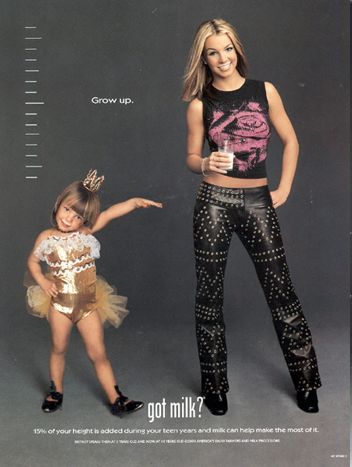 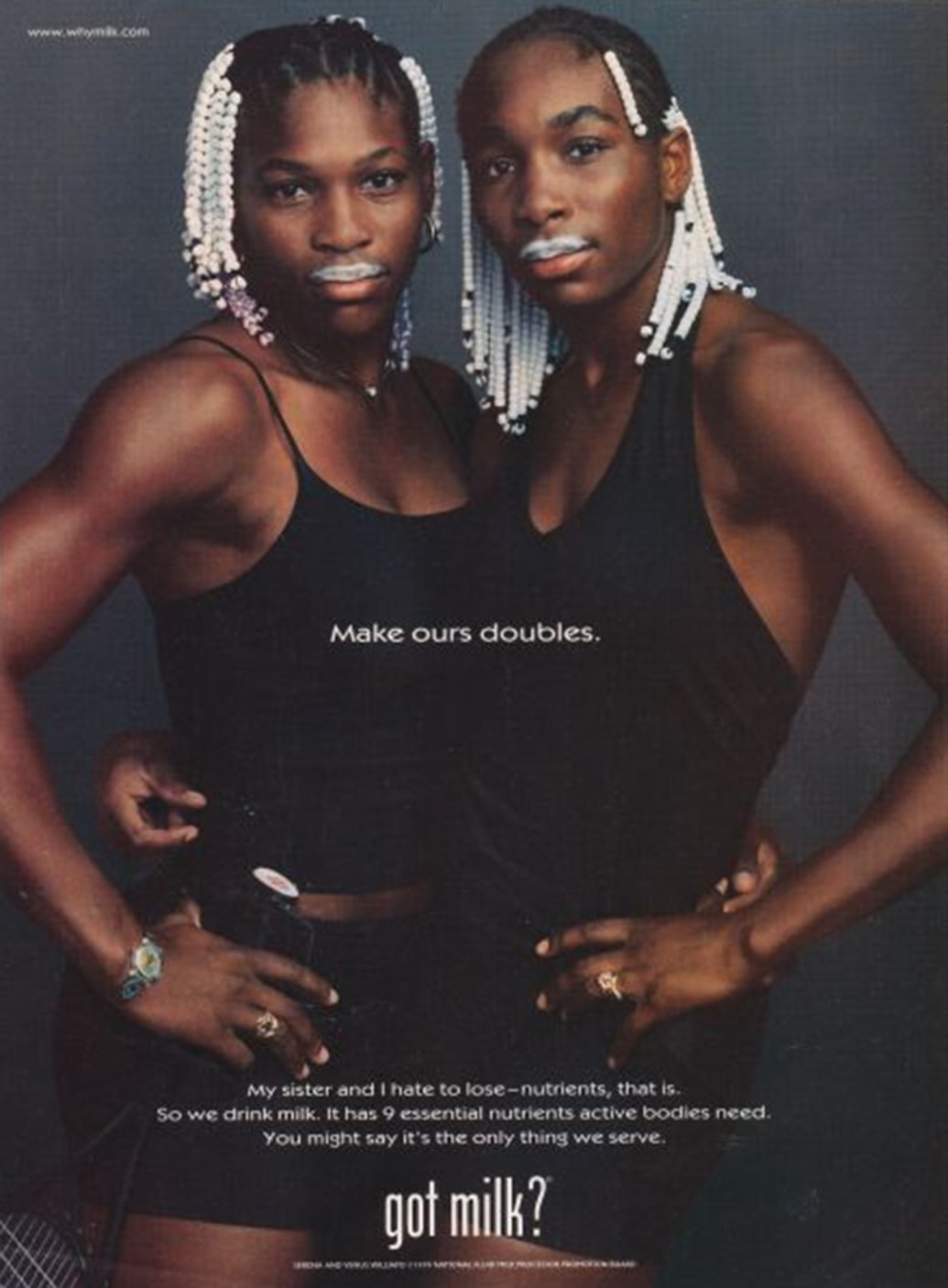 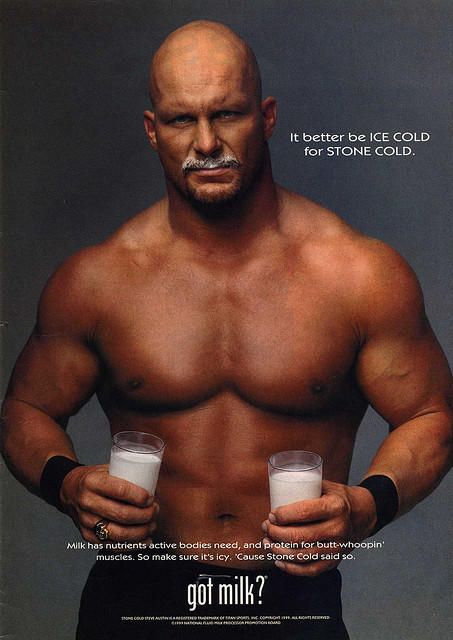 I have to admit the “Got Milk?” ad campaign was a pretty brilliant. The National Milk Processor Education Program (MilkPEP) paid celebrities to advocate milk as healthy for 20 years–but, they failed to actually sell more milk. Burn!

Has anyone noticed that as the number of non-dairy products has increased (Whole Foods apparently has an entire fridge aisle), the number of pro-dairy ads has also gone up, and the milk moustaches are back?

The point I’m making here is that much of what we eat is directly affected by the amount of marketing that is targeted at us. (Most of my professional career has been as a marketer.) When we grew up, we were barely given a food education and got most of our outside knowledge from traditional media: Newspapers, magazines, TV, radio, and other forms of ads like outdoor billboards. So the more ads you saw for animal milk and how good and calcium-packed it was for you, the more you wanted to drink it. At least I did.

When I first decided to become vegetarian, omitting meat was the easy sell, but I hung onto dairy until the bitter end because of all the great things it makes: ice cream and cheese, to name the best two.

When I was gifted with copies of Alicia Silverstone’s The Kind Diet and Kathy Freston’s Quantum Wellness, both of whom were inspired by Campbell & Campbell’s The China Study, I learned about the myth of the calcium argument, and this is my first reason why vegans don’t drink animal milk.

Reason #1: Although cow’s milk offers calcium, it causes the body to release even more of it.

Dairy-free countries have the lowest rates of osteoporosis on Earth. The more milk a population consumes, the weaker its bones get. Meat and dairy are the chief causes of osteoporosis, not the cures. The calcium contained in plant-based sources is actually more readily absorbed by the body.

Other health factoids mentioned in Silverstone’s The Kind Diet:

It was pretty much right after I learned this that I started drinking soy. About a year later, some idiots in my Facebook feed scared me with the myth that soy causes too much estrogen and potentially breast cancer (more info on that here), so I ended up switching to almond milk. Now there are just so many alternatives: Cashew, coconut, oat… ’cause I know like me, people don’t all do nuts.

For some, flavour is a problem but I say you just gotta experiment a bunch, and find one that works for you. Coconut is pretty damn neutral when it isn’t sweetened.

Dairy vs. Alternatives: The Test

Because I know you wouldn’t just believe me on this calcium thing, I compared the nutritional content posted on various beverage cartons, and here are the results for the amount of daily intake in 1 cup: 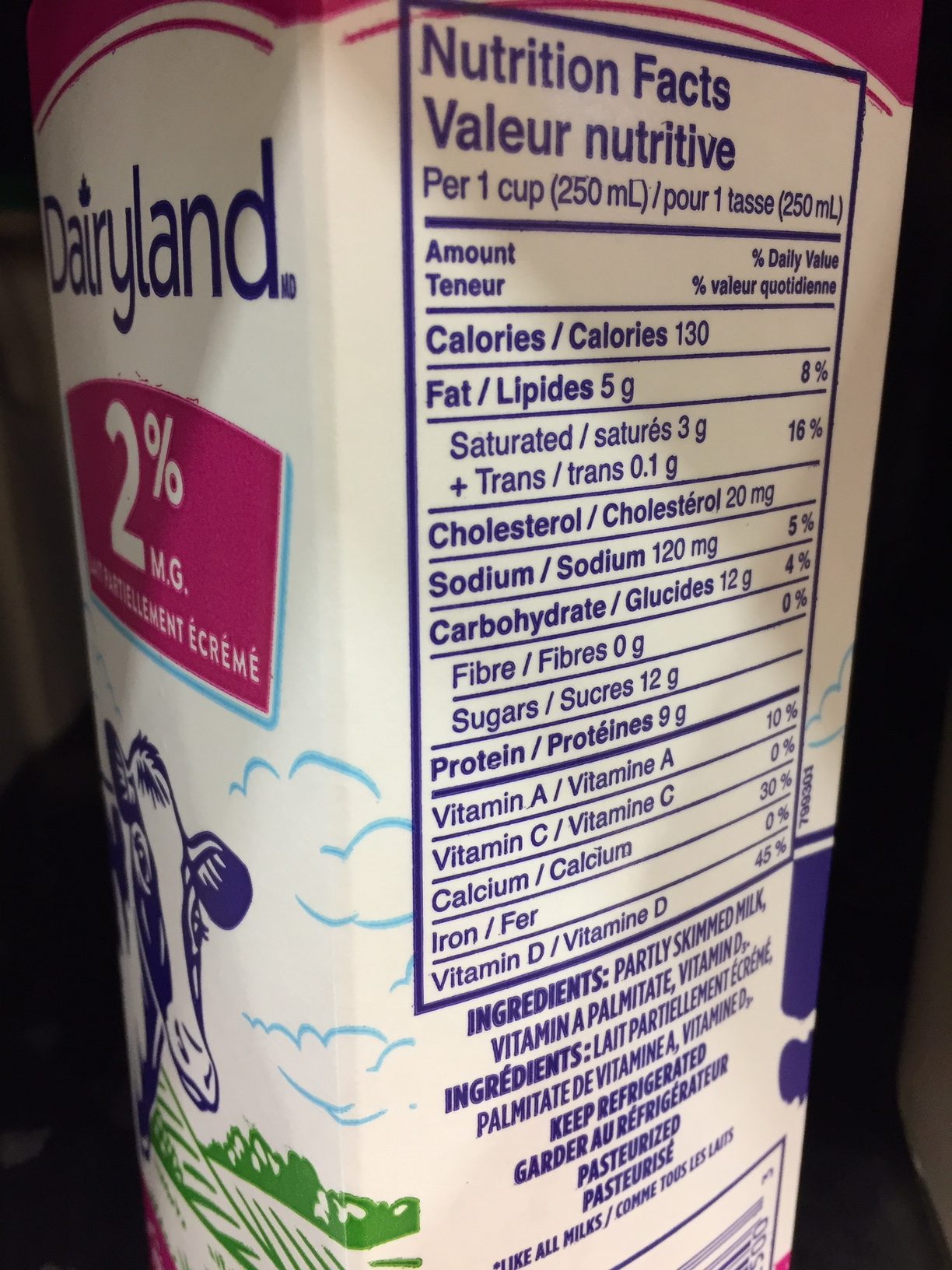 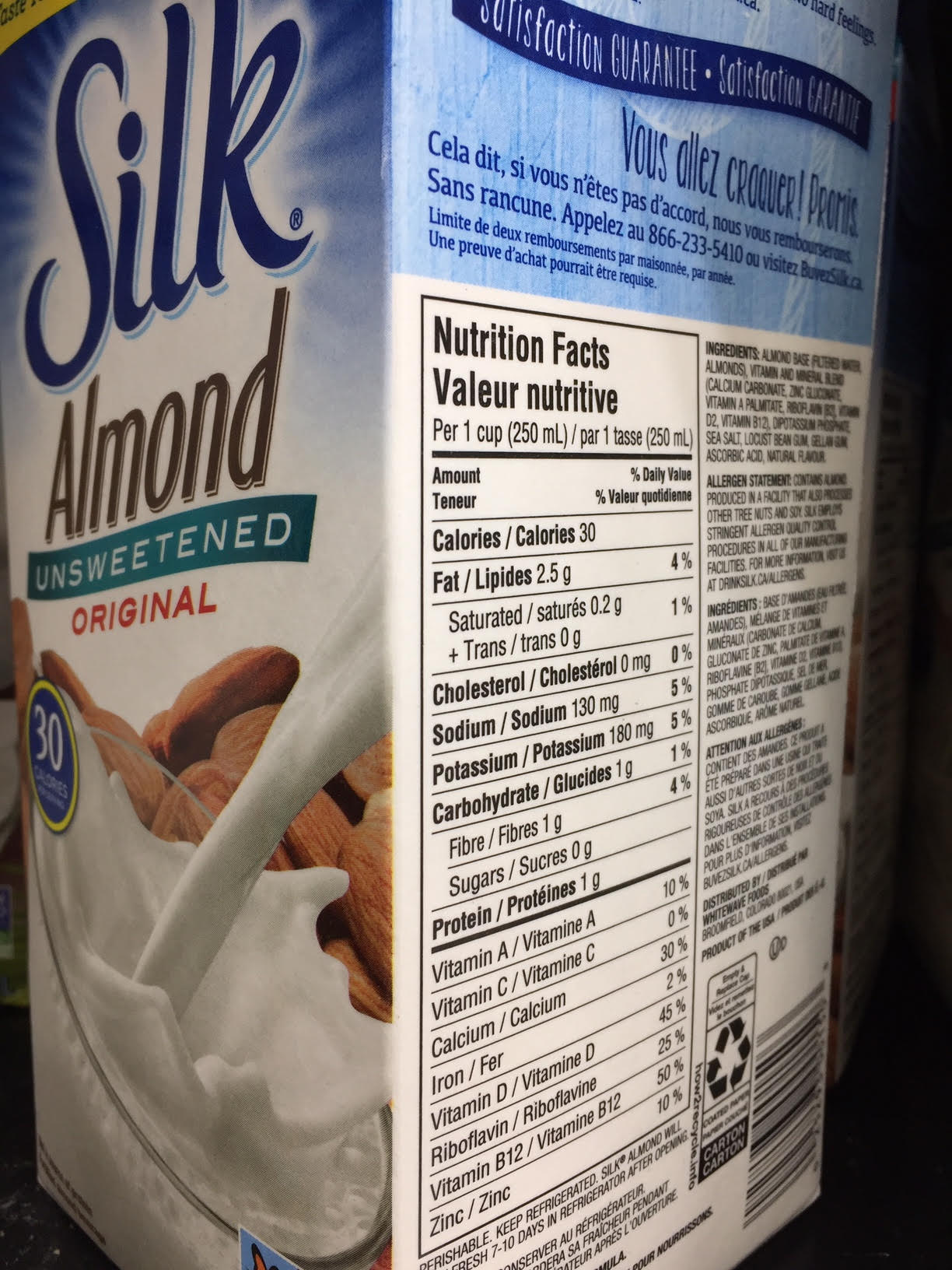 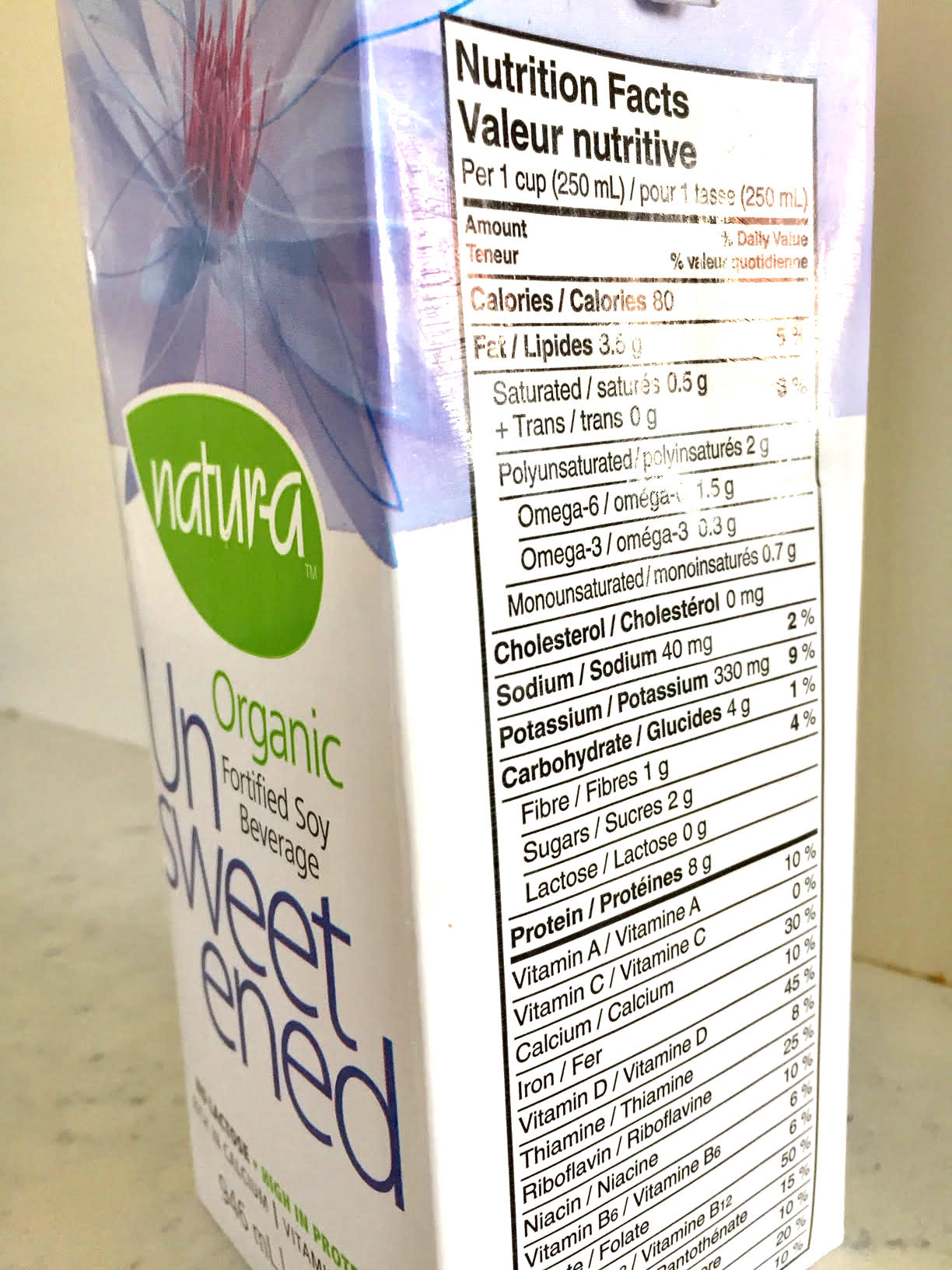 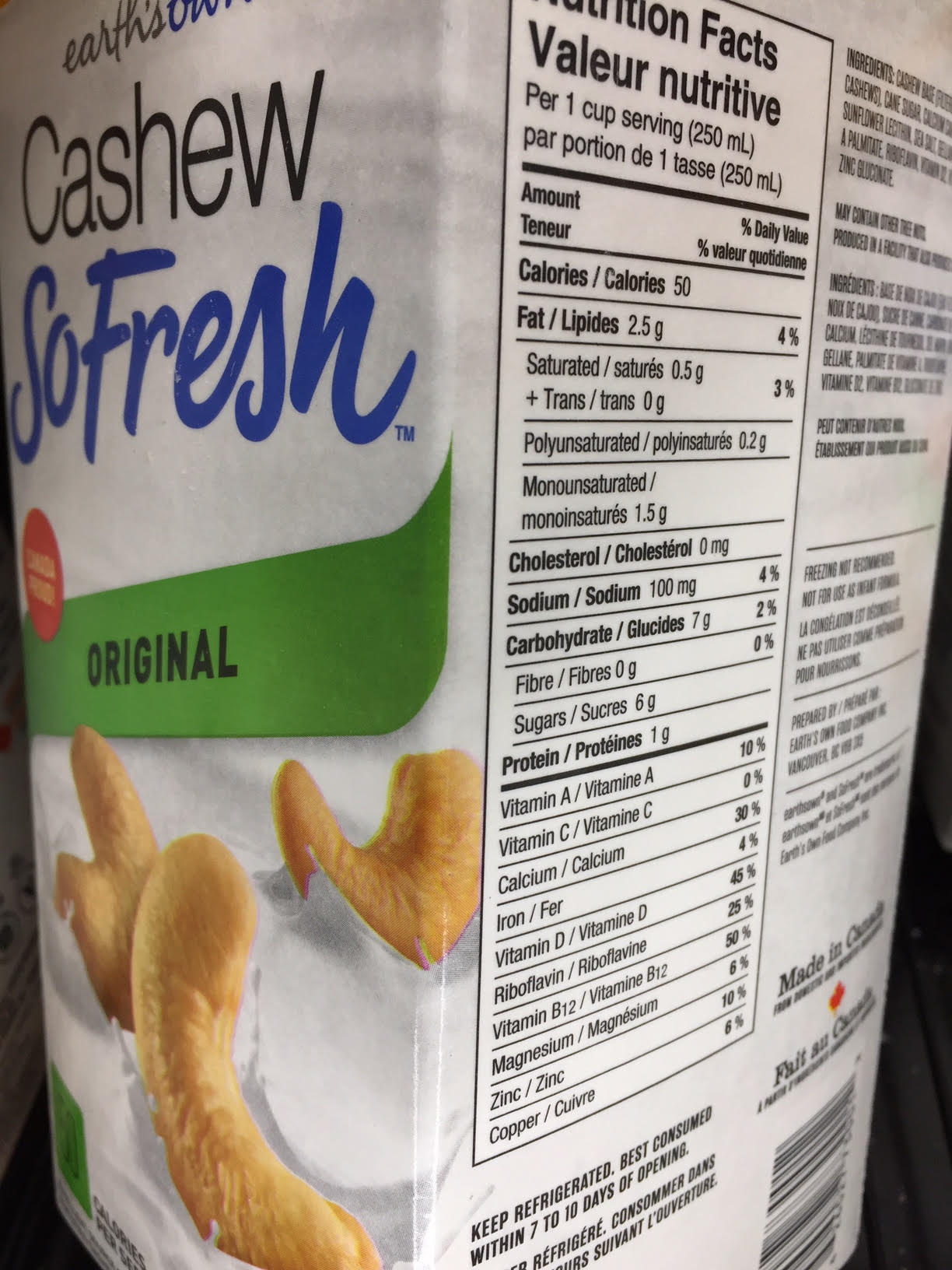 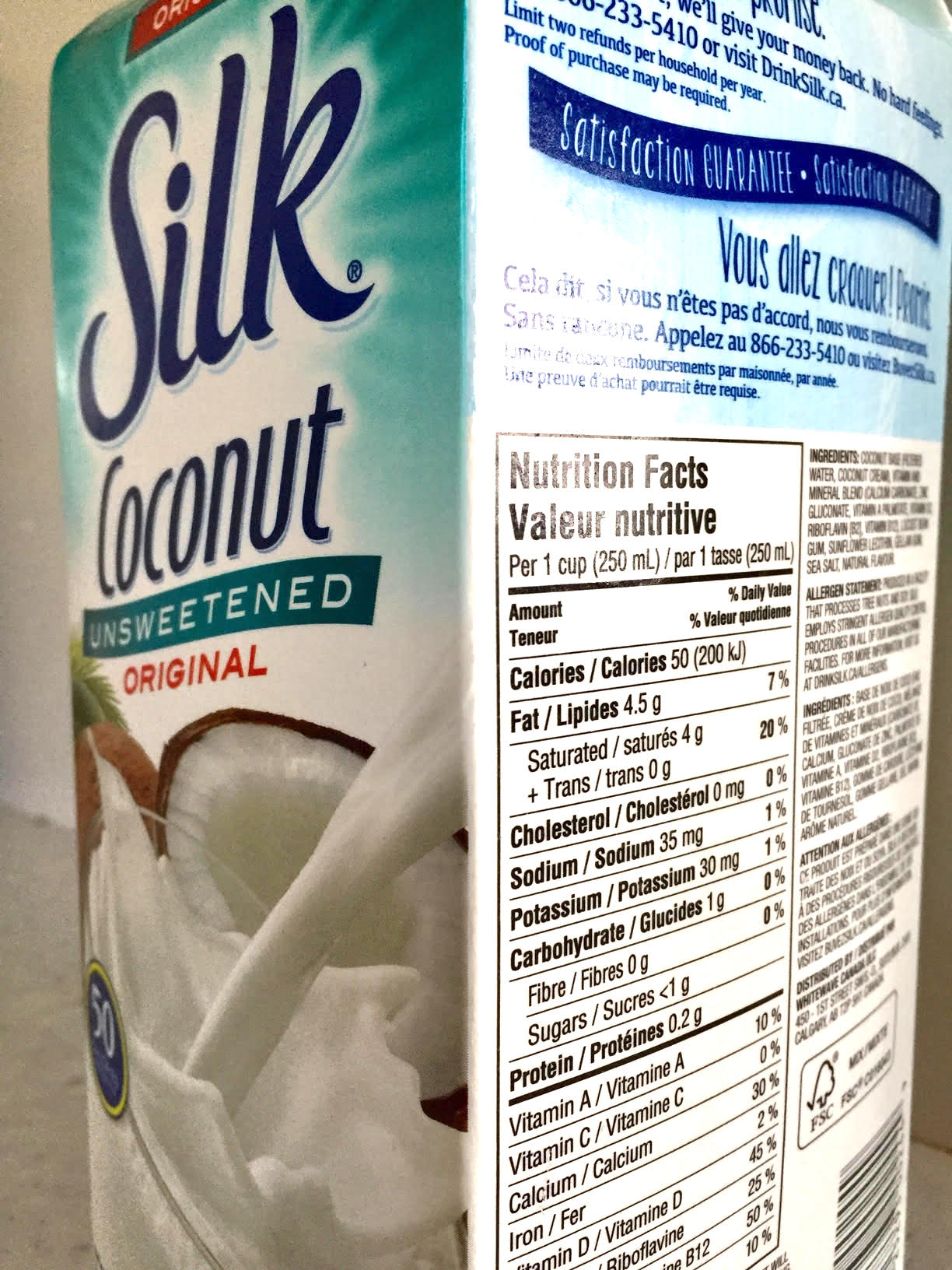 As you can see, cow’s milk provides no additional calcium compared to other drinks, even coconut! And lo and behold, I should have been drinking soy all this time to get almost as much protein as cow’s milk in each cup — and less fat! Thanks for the labelling laws, Canadian Food Inspection Agency!

Below I’ve included a handy infographic from ZeroCater you can download.

I mentioned The China Study above, which I HIGHLY recommend as your #1 resource on why you should consider eating more plant-based. I know that books aren’t for everyone, so lucky for you, the producers of Cowspiracy (also a must see) made a documentary called What the Health that you can watch! It’s on Netflix, and the trailer is below.

Despite the information available that proves that cow’s milk is not healthy, many vegetarians will still argue that because the Dairy Farmers of Canada has a strict policy on not feeding or injecting hormones or antibiotics in their cows, it justifies the animal treatment and manufacturing of cow’s milk as a product. And that may all sound fine, but brings me to the next reason why vegans still don’t drink animal milk:

Imagine preparing for 9 or so months to welcome a new baby into your family. You decorate the room, receive shower gifts, and go through all the funky cravings and physical challenges – only to have the baby taken away from you 24 hours after giving birth.

That’s kind of what it’s like for a mother cow and her calf in the span of a few days, minus all the human stuff. But cows DO feel! Like most animals, they hate being separated. Here’s what else goes down:

My husband and I talked about this not long ago and even though the above may not be happening on Canadian farms – or to other animals like goats or sheep who may not face a similar fate as cows – IMO, buying cow’s milk locally still perpetuates the dairy industry globally…if an act is not okay outside our country or to one animal, it’s not okay anywhere in my book.

It’s stuff like this that I had to consciously ignore to justify my eating of ice cream and cheese up until last year. I don’t know about you, but I hate knowing I’m doing something harmful unintentionally!

If that wasn’t enough for you, there’s one more reason I’ll present on why vegans don’t consume dairy.

If you’re a hypebeast or a trendy millennial (or both) and it’s all about looking like you’re an environmentalist rather than saving animals, that’s good enough of a reason! Aside from the drink alternatives available at grocery stores, more and more artisan makers are popping up and providing hip and tasty products, even calling beverages “mylk” instead to avoid the harassment the farmers are giving them to try and stop them from ruining the dairy industry. If you’re savvy in the kitchen, you can even follow vegan influencer Erin Ireland (owner of To Die For Fine Foods) and make your own nut milk and cheez.

Nutmeg Mylk (below) makes some cool blends… The Blue Moon is a coconut & cashew mylk blend with E3Live, a blue-green algae. If I was a smoothie drinker, I’d be all over this shit and Instagramming like hell! Now I know how I can make my baked goods blue in natural way. 🙂 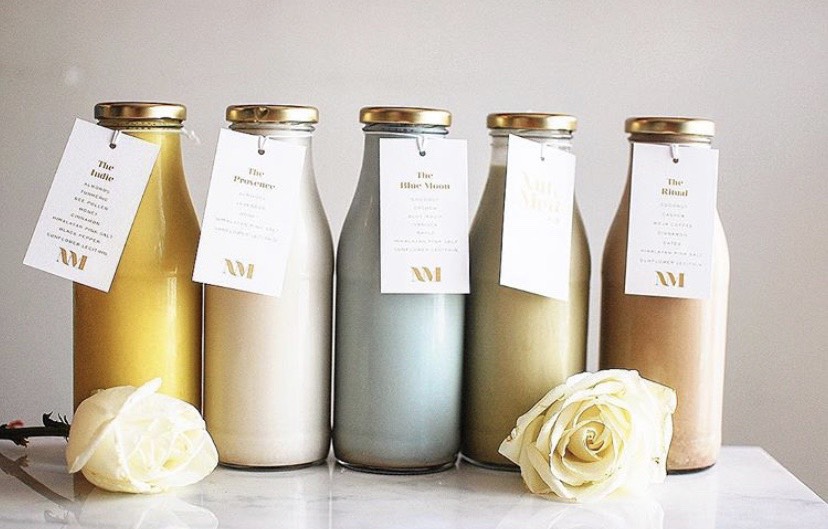 Cheez & dips more your jam? Check these out. Yes, I know there are many more around the PNW, but I always gotta support local first.

A few other beverage companies in Vancouver: 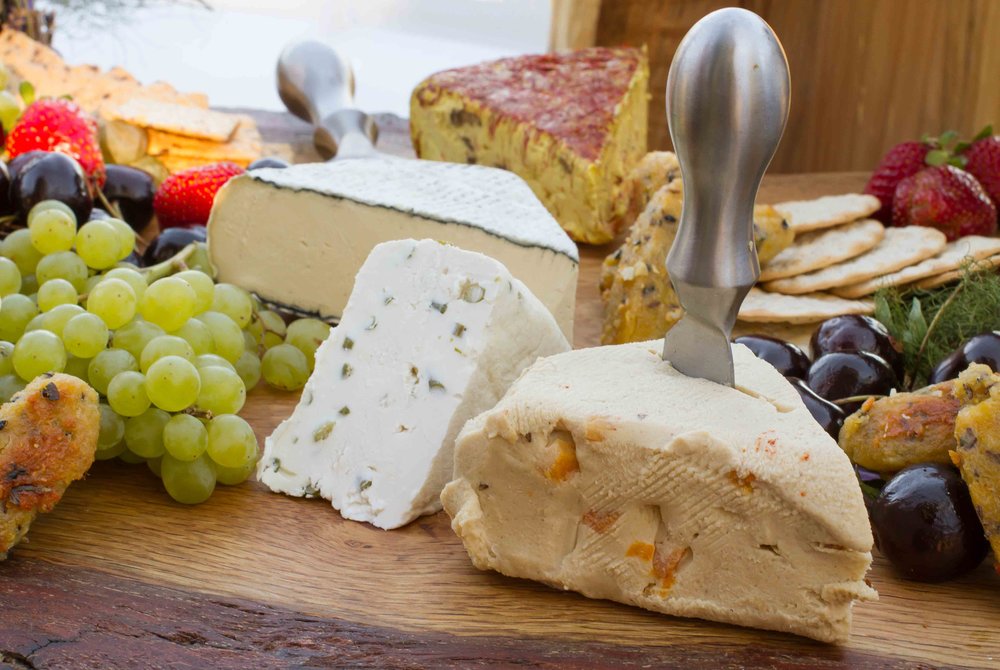 As for your ice cream needs, there are so many options available in town: see my food list for my fav brands.

Closing: Please do not harass animal farmers or other industry workers

The information in this blog may not be new to vegans, but it likely is to everyone else and that’s why I wrote it. I feel like this is a good opportunity to say that while I don’t agree with animal or dairy farming and the inhumane treatment that goes along with the industry, I don’t think it’s alright to harass or belittle farmers or people who work in slaughterhouses. Knowledge is power: some dairy farmers are choosing to switch industries, and you can’t judge anyone who works in a slaughterhouse because maybe they don’t have any other job options ATM. Even if workers are equipped with the knowledge and still continue to behave in a way that favours the industry or profit, they’re still human and deserve to be treated with dignity. I haven’t yet taken part in any protests, but I believe that there is a way to silently or peacefully protest at locations to inform, educate, and influence. I don’t believe in attending protests to harass people.

In the year or so that I’ve been more involved in online plant-based groups, I’ve seen so much judgment by hard-core vegans against other vegans who choose to do things like eat Beyond Meat burgers from A&W, because the patties are cooked on the same grill as animal meat. I believe that kindness always wins, and when we continue to spread accurate knowledge and vote with our dollars, that is how we’ll build the movement and change the status quo — not with hostility, or taking our anger out on others.

Whether you’ve already reduced or eliminated your dairy intake, or want to going forward, I’d love to hear your thoughts in the comments. Thanks for reading; here’s blog #2 on why vegans don’t consume bee products.