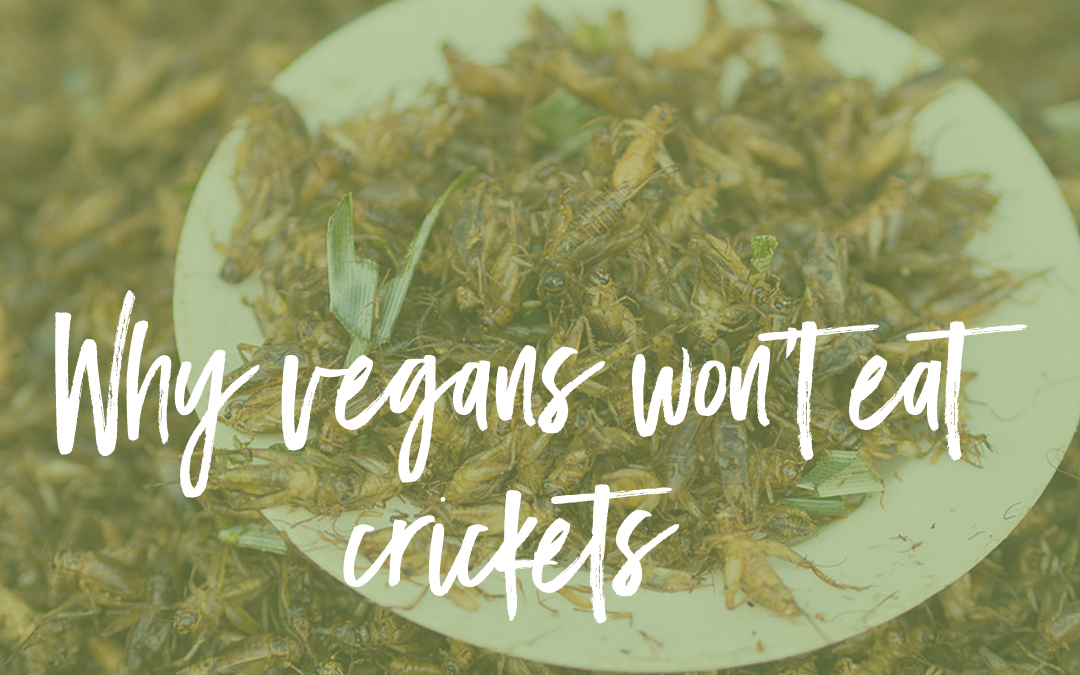 Or, why vegans still have esthetic standards

This is the third and final blog in my series on why vegans don’t consume certain animal products, such as dairy and honey.

This one is less lengthy and argumentative, simply because I don’t think many people care for cricket-based products or entomophagy, the process of manufacturing insects for food.

First, let it be known that if I had to eat an animal for survival, crickets would probably be it.

This bag of protein powder made of crickets by Coast Protein has 20g of protein and only 1 g of fat in a 33g scoop. Look at how much effort they put into combatting meat protein on their display case! Isn’t that cute? 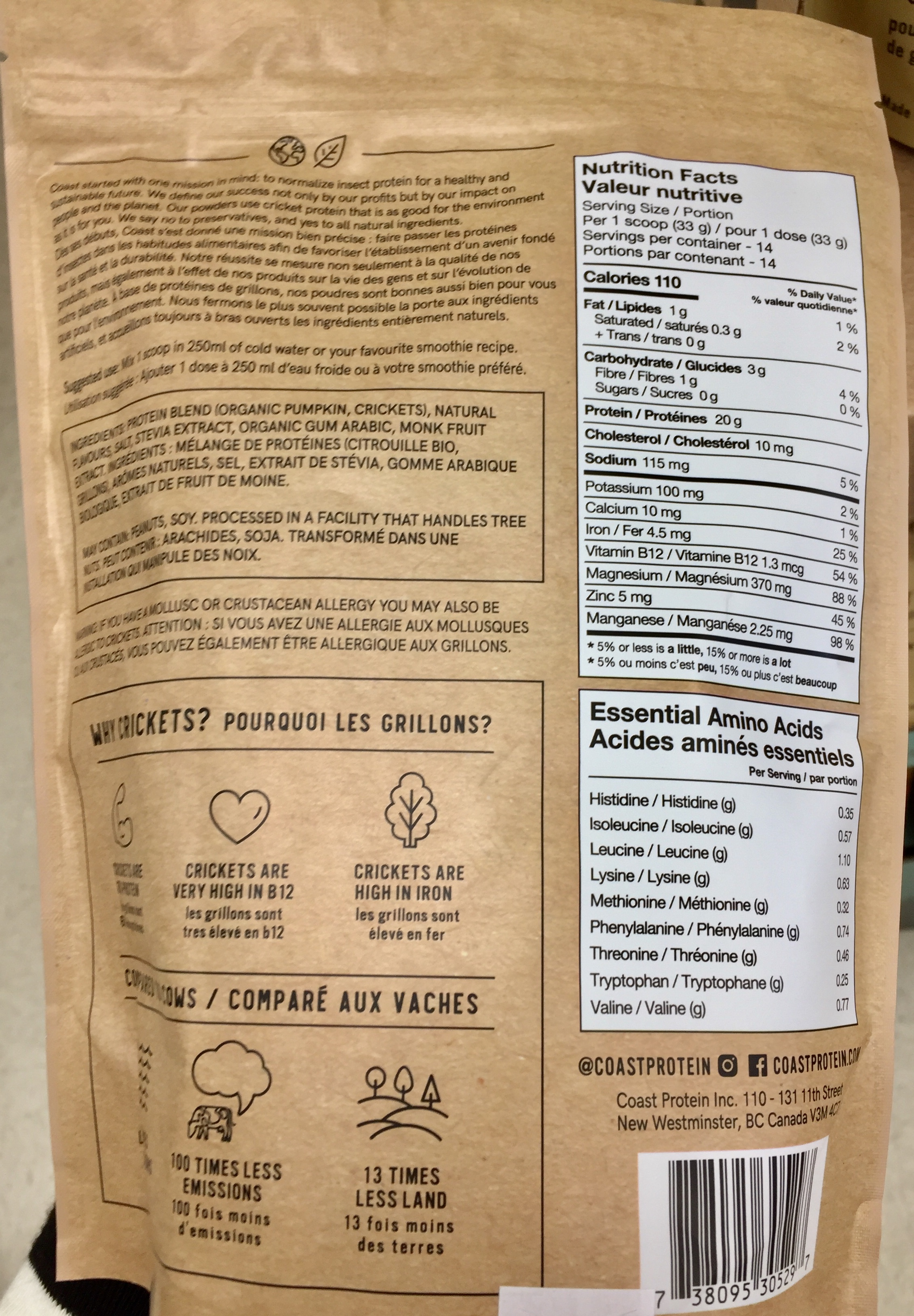 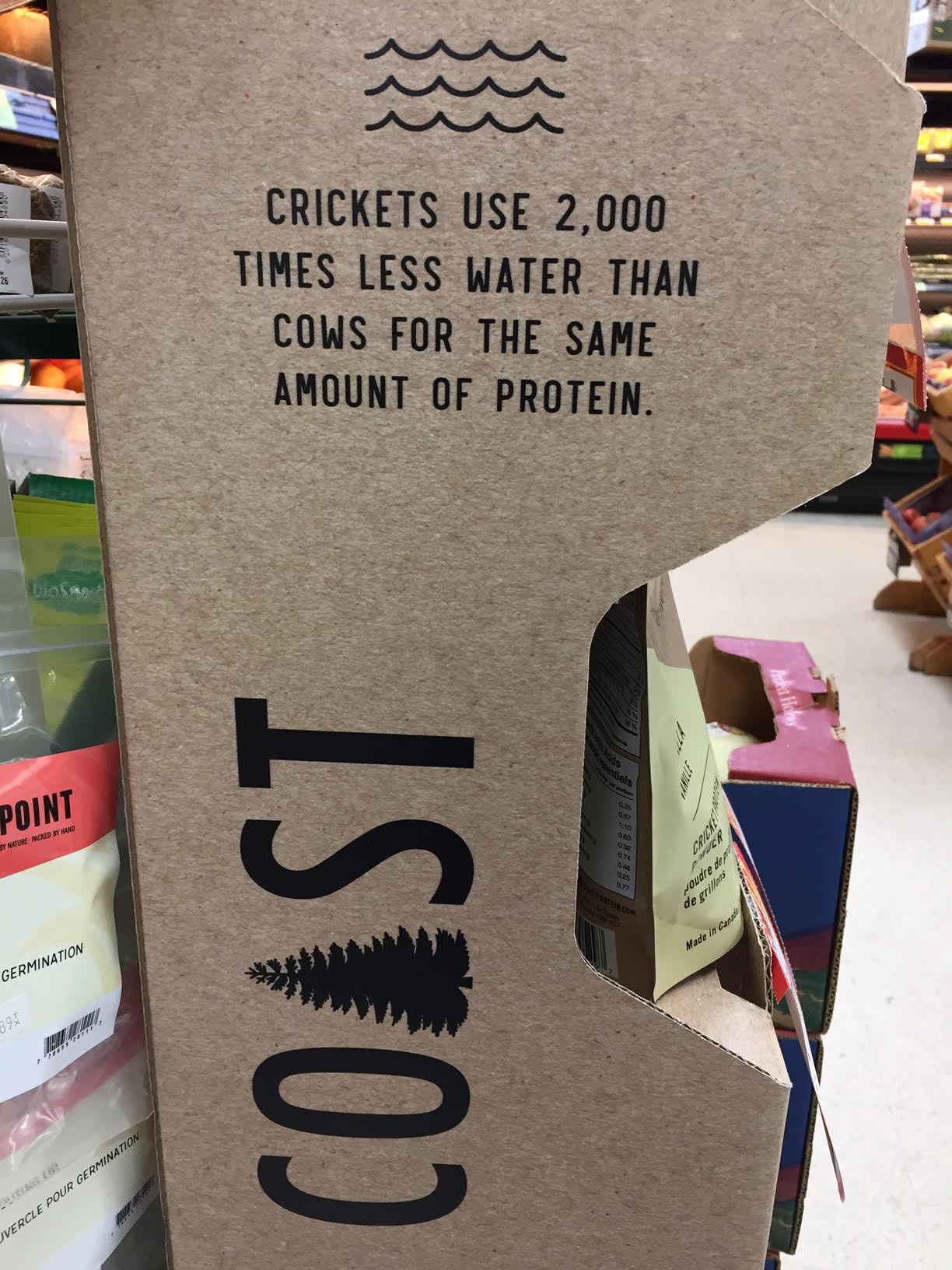 Crickets are in such large numbers that there’s no shortage of them (or no known effects of the impact of their extinction, compared to bees), manufacturing requires significantly less land and water resources and produces 100x less emissions than livestock production, they’ve got some health benefits, and they pack a lot of protein.

If you’re drinking milk to get protein, you should be making smoothies with this shit instead (and it comes in a variety of flavours).

If you ground something up enough and put it in a delicious food like chocolate, it’ll taste damn good.

Still, there are some factors that contribute to why vegans like myself won’t touch the crickets.

Reason #1: We’re already unintentionally eating insects, and you need to kill LOTS of them to make food.

Bugs make their way into grains, vegetables, and fruit already, or by more stealth means like my husband leaving potato chip bags in the cupboard, leading to ants helping themselves to a buffet in our pantry, overdosing in my bag of oats, and resulting in some very protein-packed oatmeal cookies. Have to say, they were good!

Also, if you’re allergic to molluscs or crustaceans, you might be allergic to crickets. Read your labels, people!

Someone in a local vegan Facebook group said (in response to my honey blog) that the harming of insects was a better argument not to eat honey/pollen than the reasons I outlined, likely because it involves killing vastly more of them per unit of protein. So let’s not let the crickets go crickets.

Take it from me: when Gourmet Burgers showed up with their cricket burger at the PNE two years ago, I wasn’t yet fully vegan but I knew I was going to be. So I tried that shit. 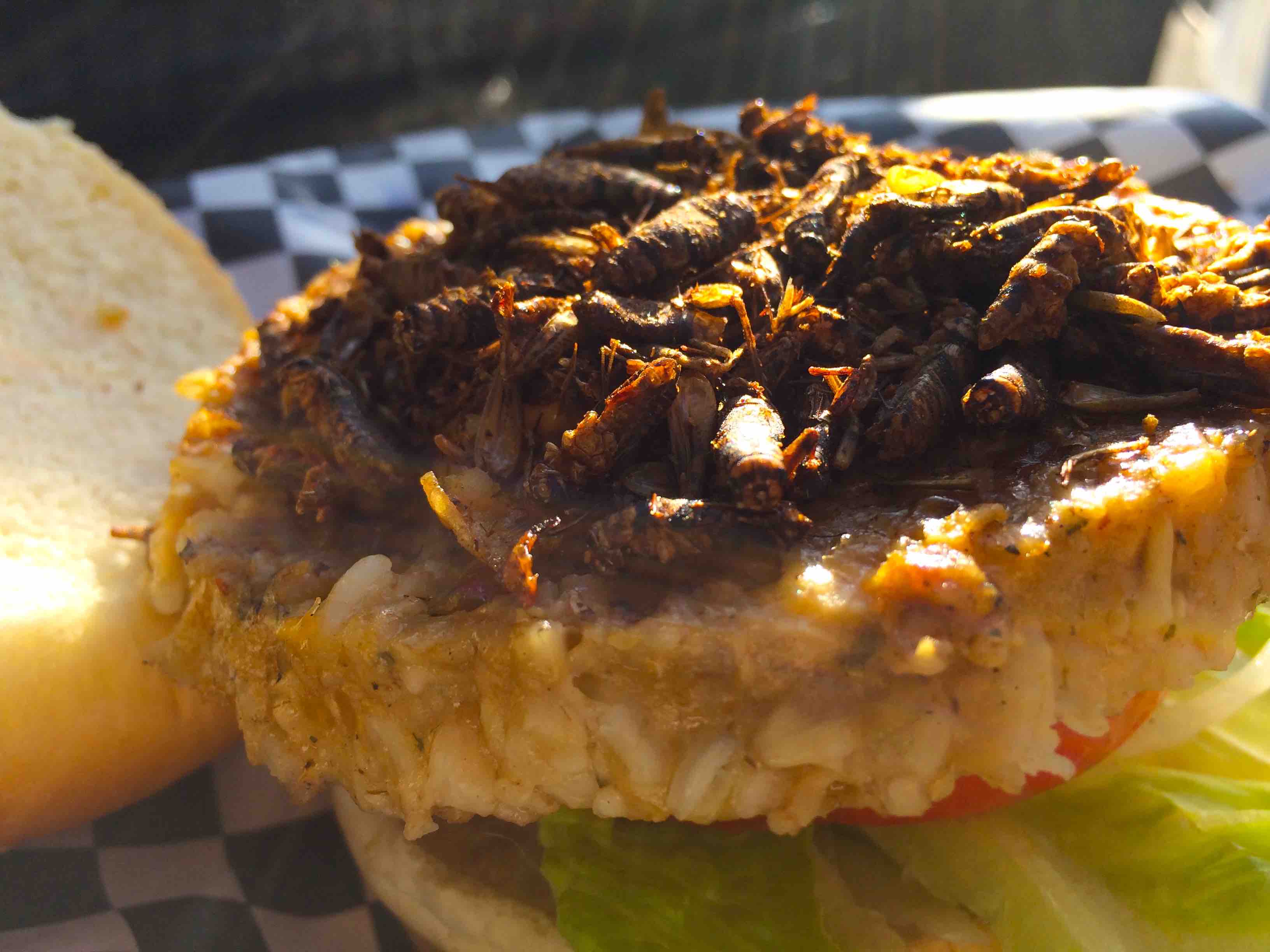 The crickets were not the worst part.

Without mayo, ketchup was really the only saucy element in this burger. Everything else was meh — I am not a fan of vegetable burger patties that are rice-based. Honestly, I couldn’t even taste the crickets, but I could feel them. They were definitely crunchy, but it was most annoying to remove the legs stuck in between my teeth.

Does anyone remember the scene in Snowpiercer in which Curtis (Chris Evans) finds out what the protein blocks are made of?

Even the lowest class of the future doesn’t want to eat them.

PETA points out that crickets are altruistic (come to think of it, they don’t bite…so that’s awesome), they provide a pleasant sound at night, and male crickets will even risk their lives to protect pregnant females. And they say chivalry is dead.

2 billion people globally — mostly in Africa — regularly eat insects. There’s a documentary out called BUGS which follows two chefs and other foodies travelling to find people who eat and serve good insects. In an interview, they don’t actually condone eating them — in fact, they point out the fallacy of cricket marketing as “the sustainable protein source of the future,” since the global poverty issue isn’t one of lack of food sources, but rather distribution. I’d like to see the movie someday.

TIME was the only media source that pointed out a study that raised crickets on several different diets and tried to see how much protein could be squeezed out of them. Crickets that ate a diet of processed food waste had feed and protein conversion rates no more efficient than that of chickens; the most successful crickets fed a grain-based diet similar to what most poultry eat, had a 35% protein conversion rate, which is only slightly better than chickens.

Study author Dr. Mark Lundy said: “I think the sustainability claims on this topic have been overstated.”

The argument that vegans don’t get enough protein is an urban myth, and unless we want to become bodybuilders, we don’t need to go crazy looking for protein or start downing the cricket powder.

Even the updated Canada’s Food Guide says that we need more fruits and vegetables than grains and proteins per meal. 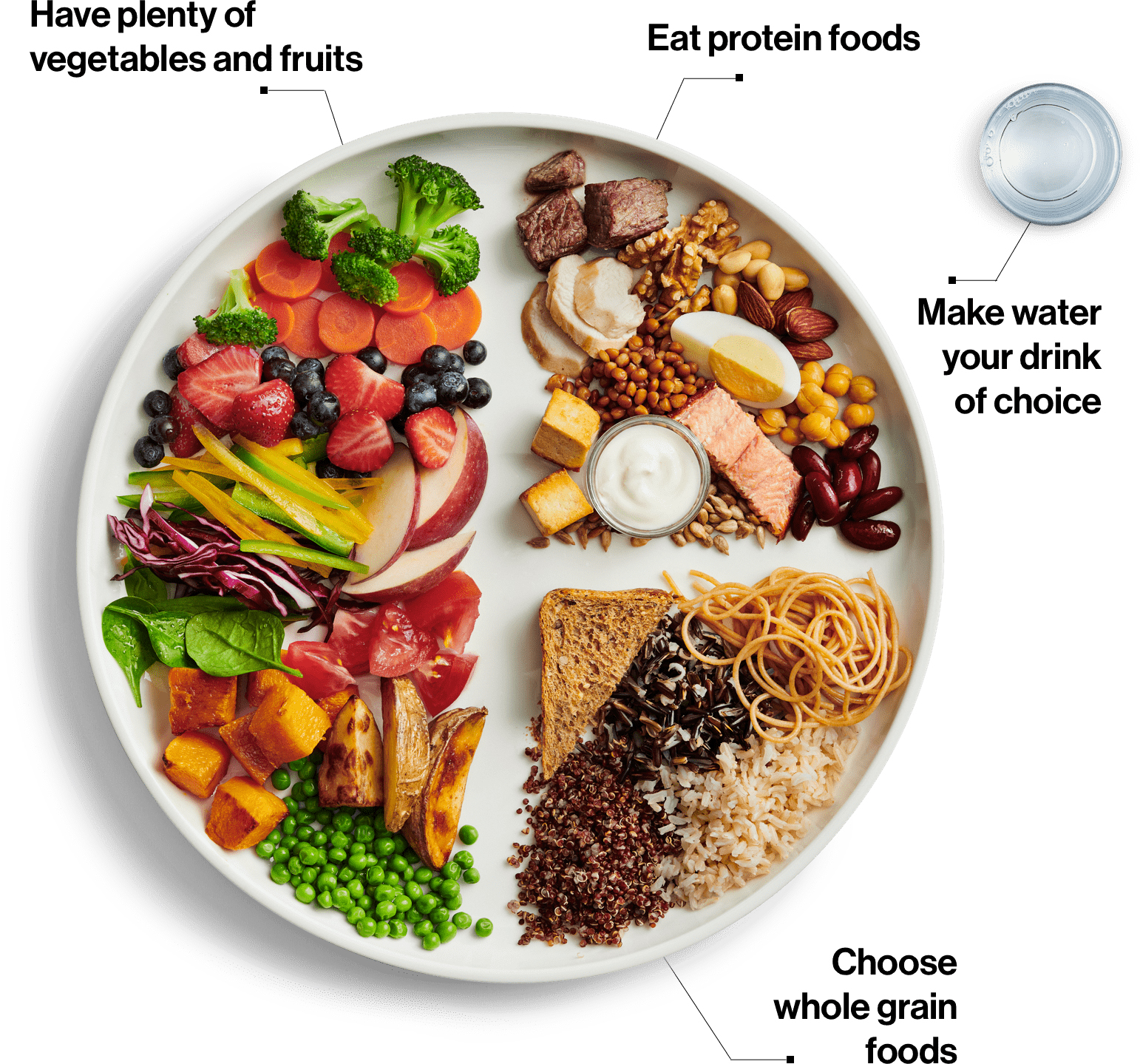 If you want to put a scoop of dead crickets on your plate, I’m not gonna stop you. But let me provide some other protein-containing recommendations (servings vary of course, but I’ve included all food groups):

Even if you weren’t a cricket fan to begin with, I’d love to know if reading this might get you to try more plant-based proteins. Please chime in below!