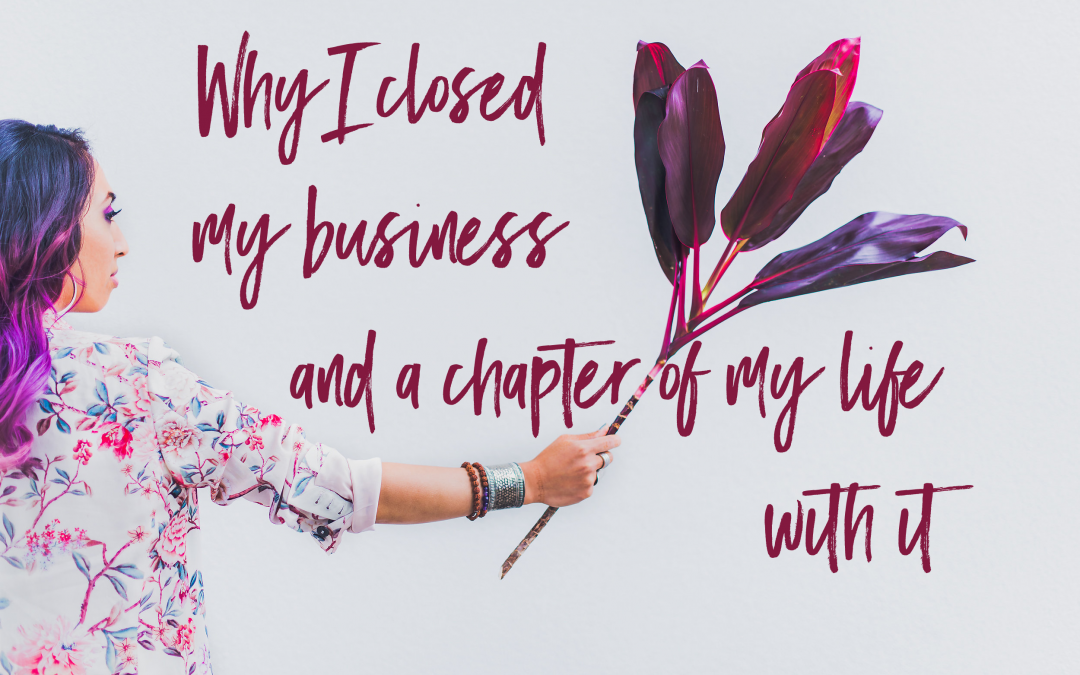 Spirit (my intuition) kicked in the afternoon of Friday, June 15, 2018. A client had just called to tell me they didn’t like two words that were printed about their organization.

Within an hour, I had a bad encounter at my side hustle job in which someone was raging in the same area I was working in, and even though I was able to focus on work, it shifted the energy of my whole day, and it was hard to recover.

I am a pretty emotionally steady person, and even if I freak out on the inside, no one would know. But even the toughest of us break down, and that was the day I knew I might be done being the boss of Conscious PR.

THE NEED FOR EMOTIONAL INTELLIGENCE

I’ve had both highs and lows over the past decade, the lows being times when clients have called to threaten lawsuits against me, or straight up called me a failure at an event when “not enough” media showed up. (For what it’s worth, two of the three clients who have reacted emotionally have been men.) I realized that it really doesn’t matter how much you preach your values or align your company with partners who appear to share those values, even on the deepest of levels. If clients, partners, suppliers, staff or I do not have emotional intelligence in the workplace, everything fails.

Of course, emotion explosions are always temporary, and I’ve built an amazing muscle for tolerating and dealing with this. But as a company owner, I can only turn to colleagues or personal support systems for recourse. If this type of sh*t happened in a different workplace, at the least I’d be able to walk in HR’s door and do something about it.

I considered suicide at least a few times over the course of running my business, most recently, in early 2018. Being the boss comes with all the responsibility and consequences, and I forgot more than enough times that what I do for money is not the only thing that encompasses who I am as a human being. Workplace mental health isn’t talked about enough within and even between companies, although I’ve been admiring the work of Thrive Global, amongst other new podcasts I’ve started to listen to since 2018.

THE IMPACT OF THE DEATH OF MEDIA

My decision might have seemed swift to some, but the business was already experiencing tremors for a few years, thanks to the slow decline of traditional media and rise of digital and social media. When I started my business, the main method we used to tell our clients’ stories were in magazines, newspapers, radio, TV, and the few blogs that existed at the time. Now, it’s flipped on its head, and although we also offered social media services in our later years, the best stories now encompass a combination of media: paid, earned, shared, and owned (the PESO model).

In 2015, an editor said they would cover our client’s story if we placed an ad in their newspaper. In 2016, two non-existent magazines pitched us with the rate our clients would need to pay to be included in the “editorial” content of their inaugural issues. I had no issues recommending clients to pay for stories if the influencer approach was the way to go, especially if the influencer provided us with the reach and engagement level of the story. But even that too has backfired. One local influencer still has $200 worth of product from our former client, and never published or said a single word about them. They know who they are.

In 2018, a local University radio station said they couldn’t air our non-profit client’s Public Service Announcement without an ad investment. Essentially, editorial is being replaced by “news” paid for by companies who can afford adverts and sponsored posts.

Clients and colleagues have told me repeatedly about how their interviews were taken out of context and manipulated to fit the medium’s agenda, distorting their public image. Opinion columns consist of rants by editors-in-chiefs rather than perspectives of the general public. One morning TV news show my husband and I watch over breakfast repeats the same recycled headlines every f*cking 30 minutes, while there are leagues of stories uncovered – or covered incorrectly – in their own backyards.

I honestly don’t know how anyone tolerates it, but we do.

The relationships I’d built with media over a decade lost their story value. I still value our relationships, but we stopped connecting as much with them because of the new pay-to-play model. No one in Vancouver talks about “publicity” or “publicists” anymore. Gary V certainly doesn’t.

In Ian Gill’s No News is Bad News published in 2016, Chantal Hebert said:

“print media are not the only casualty of this ongoing meltdown. Mainstream commercial networks are struggling to adapt to digital viewing habits of their audience leaving less money to devote to their news coverage. After decades of budget cuts, Radio-Canada and the CBC are shadows of their former selves.”

Many PR firms dropped the “PR” from their names or changed them completely. And I was planning on this too.

In Fall 2016, I had an epiphany at The Art of Leadership Conference, which I’ve blogged about more than once. I was electrified with two ideas: one was Journals by Sandra, and the other was an idea to disrupt the public relations industry by expanding Conscious PR with other partners and becoming a full-service branding, culture, and communications agency. With the decline of demand and effectiveness in Media Relations, I was already thinking more like a Creative Director and yearning to do more full-service comms work for our clients. And as everyone knows, it’s the bigger campaigns that have the highest chance of creating impact.

Over the course of a year, I tested the market and attempted to recruit not just the best of the best in town but also the most conscious of partners, and by Fall 2017 I had a full suite, a new logo and business card, and the draft for a new PR book that would be an interactive guide called The Only PR Guide You’ll Ever Need, encompassing all of the ideas that our new agency would be offering.

In November, I had a powerful one-hour conversation with a former client, who I considered an informal mentor. This person encouraged me to change my company name because “Conscious PR” just wouldn’t do our new services justice. So I searched, polled our partners, and selected a really epic name and got ready for website launch day in early 2018.

Early 2018 became spring, and I maintained my patience and trust in divine timing, communicating my fear of loss of income on my personal social media accounts through what I called the #FearlessnessExperiment. In six months, my fears of being broke and exposing my “brokeness” was gone and I was alright.

Then the shit day came, and so did a different energy.

In late June, as intuition has done to me many times in my life, I was given the call to serve in a different way. As I started telling my network about needing help in a different direction, people were congratulating me, and I found that so strange to hear, to be congratulated for what I (and maybe others) considered a failure: Closing down my company. But I felt so grateful for all these people and the community that’s surrounded me this past decade as I’ve built my business. Even though it’s closed, the relationships I’ve formed with these people will last so much longer.

Since I was young, aside from telling stories, I’ve always yearned to make the world a better place, and I know I’ve fulfilled that purpose through Conscious PR. I’ve also learned from so many people, whether clients, mentors, staff, and other colleagues, especially in the B Corporation, eWomenNetwork, and LOCO BC communities. Some of those highlights over the decade:

THERE’S HOPE FOR THE FUTURE OF STORYTELLING

I want to end on a positive note and talk about where I think news media is going, because it’s much bigger than the work of all of the communications agencies in the world combined. New media’s being crowd-financed and member-funded, as shown through recent models like Vancouver’s own The Discourse (notice how they’re not calling it media?). Laura Flanders, Founder and Host of The Laura Flanders Show, wrote this online essay on the ‘next system’, about the lack of and urgent need for alternative models in American journalism. And movements like Impact Relations and Solutions Journalism Network are driving change within the PR and media industries toward honest, impactful storytelling.

During my last client project in August, within a few hours, a local news site published a story based on a pitch I sent them. It was refreshing to see that there are still outlets who prioritize time sensitivity and are able to get stories published accurately, within 24 hours.

Businesses have to run their own media outlets now, and while the public has the dubious responsibility of having to decipher whether those stories are true or false, this is the way it is going forward, at least for now.

We have a lot to learn about the power, value, and responsibility of telling good stories. And both you and I are on this journey together. Thank you for reading.