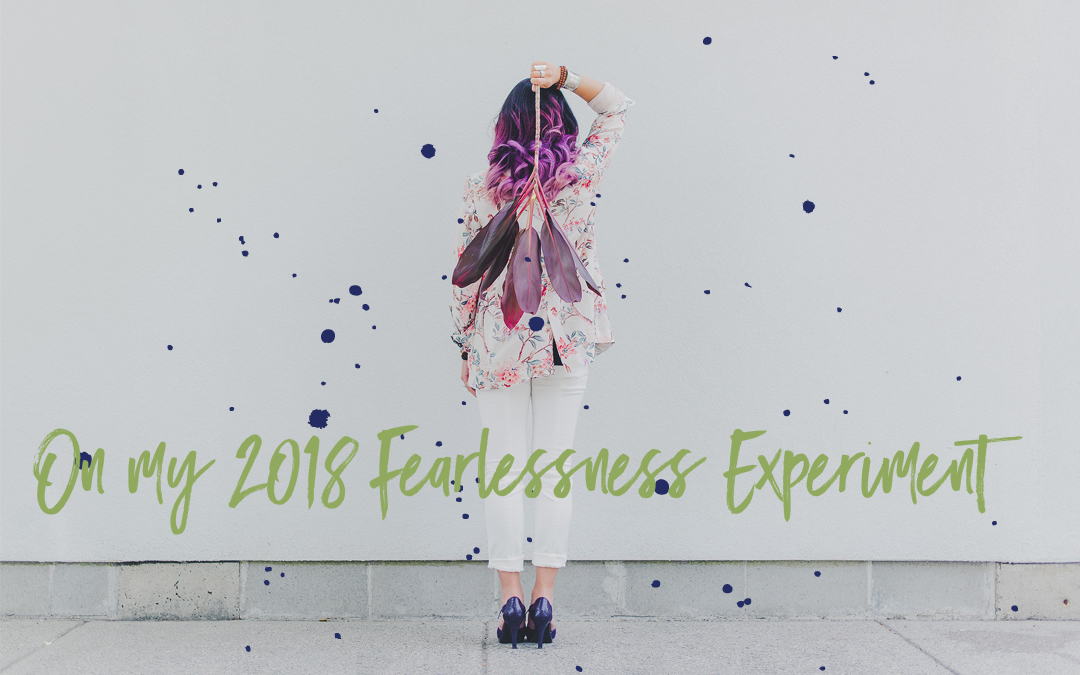 I distinctly remember the moment I turned 4 years old and my mom placed a beautifully decorated Goldilocks cake in front of me at preschool. Everyone was looking at me, and singing a song I didn’t recognize, and I was deathly afraid to go near the cake, avoiding it like it was a cursed object. As if the closer I went to the cake, the louder they’d sing and stare. There is a photo of me somewhere in my parents’ album of this — I so wish I could share it with you and I will, if I find it!

As I’ve probably alluded to in past blogs, I learned very young how important education, status, and accumulation of wealth was. So I have always tied my worth to my bank account balance.

I’m not afraid of anything to the extent of it being a phobia, but there have been only two things that have made me so afraid to the point that my palms will sweat:

I did public speaking in my school years because we had to do class presentations, but I’ve never been one to raise my hand to answer or ask questions. When 10% of my grade relied on participation in University classes, doing that was some of the hardest sh*t for me.

In 2013, my intuition gave me the greatest gift by telling me that I could do a TV segment better than my client could. So I volunteered myself, and I got the gig. It was one of the hardest things I’ve done (even though it probably doesn’t look like it) and was a real turning point in tackling that fear.

I’ve never chosen to tackle the heights, but I have ziplined so I know it’s more of a physiological rather than emotional fear. At some point in elementary school, Cliffhanger was one of the Friday night movies I watched with my Dad and siblings. The opening scene below – where a woman falls to her death – was pretty freaking horrific, and I theorize that this is probably where I get my sweaty palms from. Each time I dream about heights or falling, I always wake up. My palms were definitely sweating when I found the exact scene on YouTube. You’re welcome, haha!

A smaller fear that is mostly disgust-based is that of long legged insects.

I killed spiders when I was younger, but five years ago after taking a self-dev program I realized I am more powerful than they are, and as an aspiring vegan, I’d rather just get rid of them than kill them. So I started mustering up the courage to pick them up and throw them out the door.

A few weeks before writing this post, my husband and I had an ant problem in our kitchen. Ants were coming up through the crack in the base crown moulding beneath our kitchen door, probably in the numbers of five dozen daily. The one morning I woke up and Leo had left early for the day, I couldn’t make my breakfast without encountering them, so I vacuumed as many as I could. But Leo pointed out that we didn’t want them to stay and multiply in our vacuum bag, so I had to just pick ’em up one by one until he went and got the ant spray a few days later.

Wish I had a photo of that scene too!

The fearlessness experiment I started in January 2018 was to tackle two underlying emotional fears: Not having enough money (by my standards), and having people see a most vulnerable part of me.

So I figured that if I could post my income, debt, savings, and one thing I haven’t told anyone (not even Leo) at the end of each month for one year, not only would I be facing my fear head on, but I’d also be able to observe how I felt each time, and see if I am still afraid of being exposed.

I have to admit, social media is a great tool for fears of exposure. Of course, you have to have a bit of a following for posts to show up in people’s feeds, so I have enough that there were at least a few comments on each post.

When it came to the bank balances, no one really seemed to care about my low income. In fact some thought my numbers overall were pretty positive. For me, exposing my numbers was more scary than sharing the secret.

With the exception of my very first post that alluded to my thoughts about suicide, there weren’t very many comments – positive or negative – about what I was posting. There were a few curious comments by people who seemed more interested in the experiment itself than my content.

The experiment didn’t change the fact that I still think I’m not earning as much as I’d like, but after five months I honestly didn’t seem to care what people thought. And I’m pretty sure they don’t actually care how much I earn. Everyone has bigger problems than you think.

I also started reminding myself that these numbers weren’t a reflection of my situation forever. And that when my income does improve, it’s way better to have shared my shitty numbers than the better numbers, because then I might have less people trying to rob or scam me!

It’s so interesting the stories we tell ourselves, and in my case, the story I was telling myself to try and make myself feel better. Which doesn’t happen often.

I still wonder what might be different for me emotionally IF there was an asshole commenting and saying there was something wrong with me because of how much I earned in a given month.

But that didn’t happen, probably because I’m pretty careful about who I add to my Facebook network, and because people on Instagram care more about images than what’s in the description.

When you don’t care, others don’t either.

I also learned that the name of the experiment was in itself false. There is no such thing as fearlessness, only dealing with fear. So if I were to recommend someone to do something similar, I wouldn’t tell them to call it a Fearlessness Experiment. But it wouldn’t have the same ring to it…

I’m glad that my experiment’s over, and that I did it, because I feel that it’s one less fear I have to worry about. I really do feel like if you have a fear that’s stopping you from being your fullest self, the faster you can tackle it, the faster you can overcome it and move forward toward your wholeness.

Social media can be really horrible, but in this case I learned a lot about myself from it. I hope it can be that tool of reflection for you too.