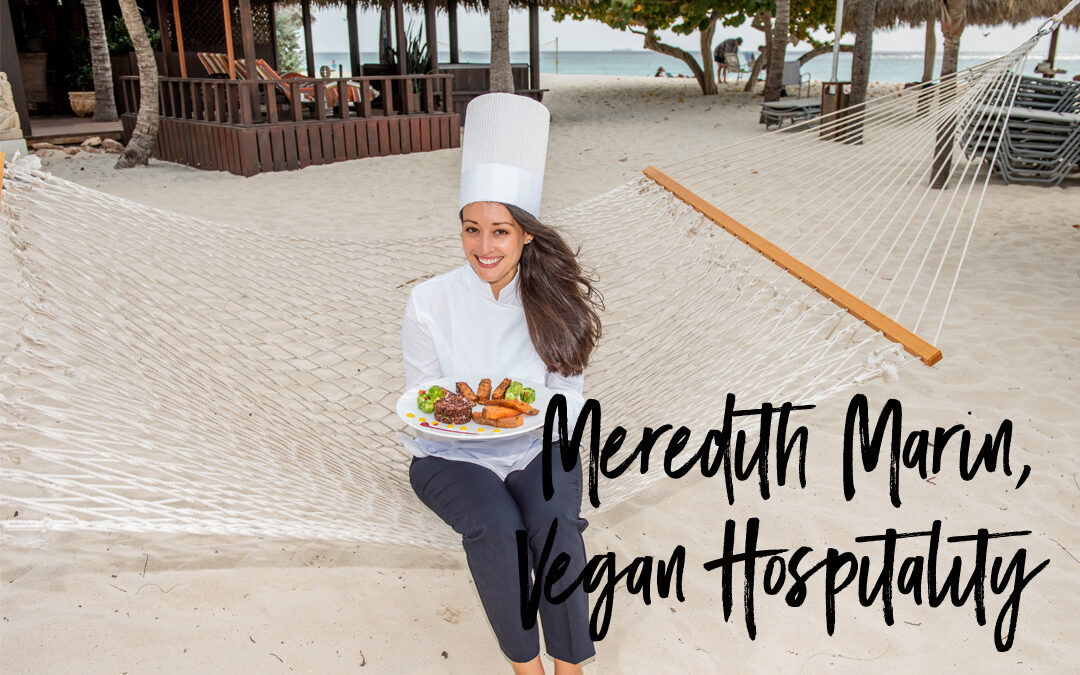 Before I started marketing my book, I told myself I wouldn’t have a “favourite” story or contributor, because they are all special in their own way, but I might officially be going against that! There are some stories that have been easier and more enjoyable to share in the podcast interviews I’ve been on, and Meredith Marin‘s story behind Vegan Hospitality is one of them.

Because I’ve told Meredith’s story several times, I asked her how she came to the small Dutch Caribbean island of Aruba, the location of which her amazing story develops. In 2016, she and her husband had their first child. She wanted to stop working to be with her daughter, so she quit her job in NYC and the family moved to Aruba where her husband is originally from because he had an opportunity to work as a sustainability policy advisor. He had only worked for a year before the prime minister he was working under lost the election, which created an opportunity for him to stay home with their daughter right when Meredith launched her business and subsequently, a whole new phase of her career.

Vegan Hospitality trains vegan activists around the world to start their own hospitality consulting businesses in their local communities, and over 60 vegans have graduated from the program in 19 countries and 18 US states. Although she hasn’t run major marketing campaigns for Vegan Hospitality yet, she shared some of her most successful marketing strategies for #VeganAruba—starting with media outreach.

She says in my book:

I connected with local media (on radio, in newspapers, magazines, and on TV) and took every opportunity offered to discuss veganism and my mission to make the island vegan-friendly. I collaborated in producing an eight-episode TV show about veganism on the island, and during the show I gave a vegan food tour of a popular supermarket, and also held a contest for someone to join me on the last episode of the show and take a food tour of the island where we tasted lots of vegan food on camera. I was featured in several travel magazines talking about my work creating vegan menus for restaurants, which got lots of mainstream exposure for veganism. For example, Destination Magazine was in the back of seats on major airlines during the winter travel season, and Menu Magazine was in every hotel lobby. I spoke about veganism wherever I was invited. At restaurant and hotel association meetings, at festivals, for the government, at the university, at a climate strike, at the central bank. I tailored my speeches for the audience. I also rented out space at the local culinary school and taught vegan cooking classes.

What I love about Meredith’s story is that whenever she was given a platform, she didn’t just make it about her business. She helped to create media, involved other businesses, and the general public. Her story has been featured in more than a few news outlets, and she’s also published pieces of her own.

Meredith also created a restaurant directory to promote restaurants with vegan options. Providing free marketing to restaurants encouraged them to label their menus and include options for vegan guests. This is a great example of an asset that benefits both restaurant businesses and ultimately the vegan audience travelling to Aruba.

Below is one of Meredith’s articles published in Island Gourmet Magazine in 2020. 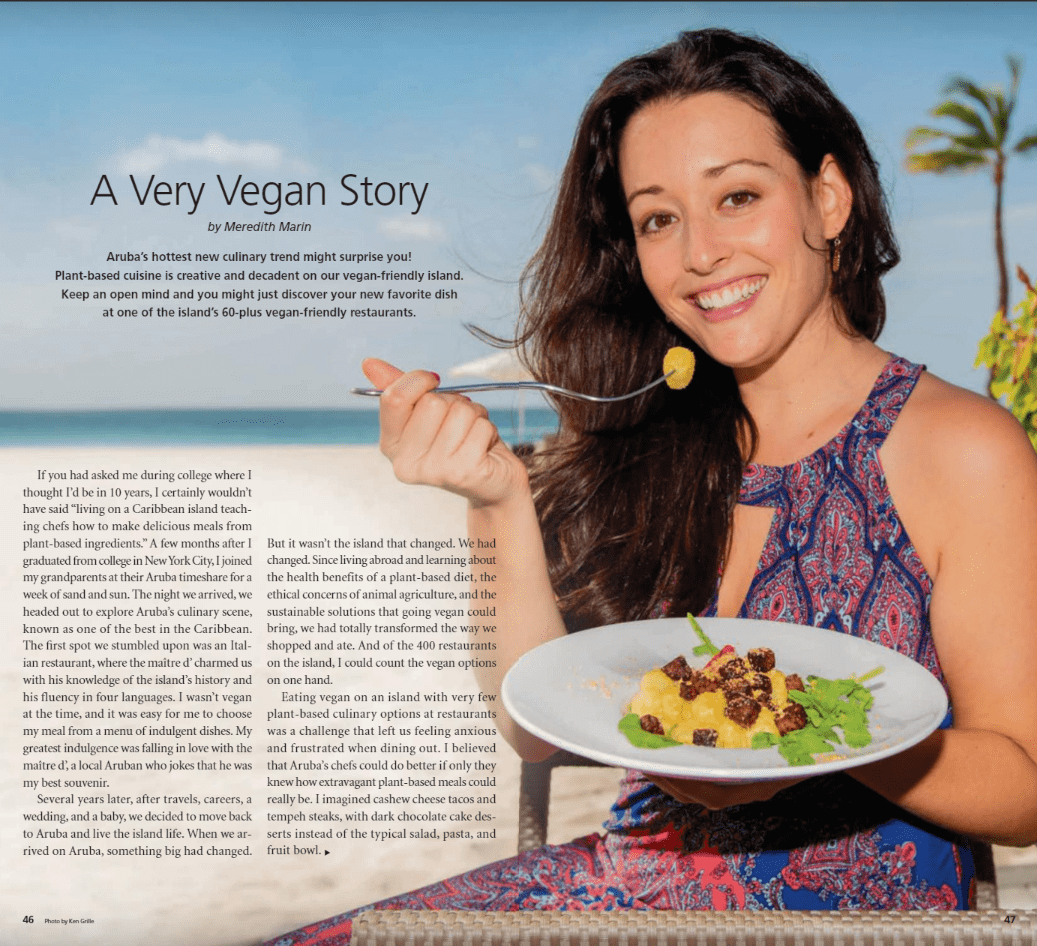 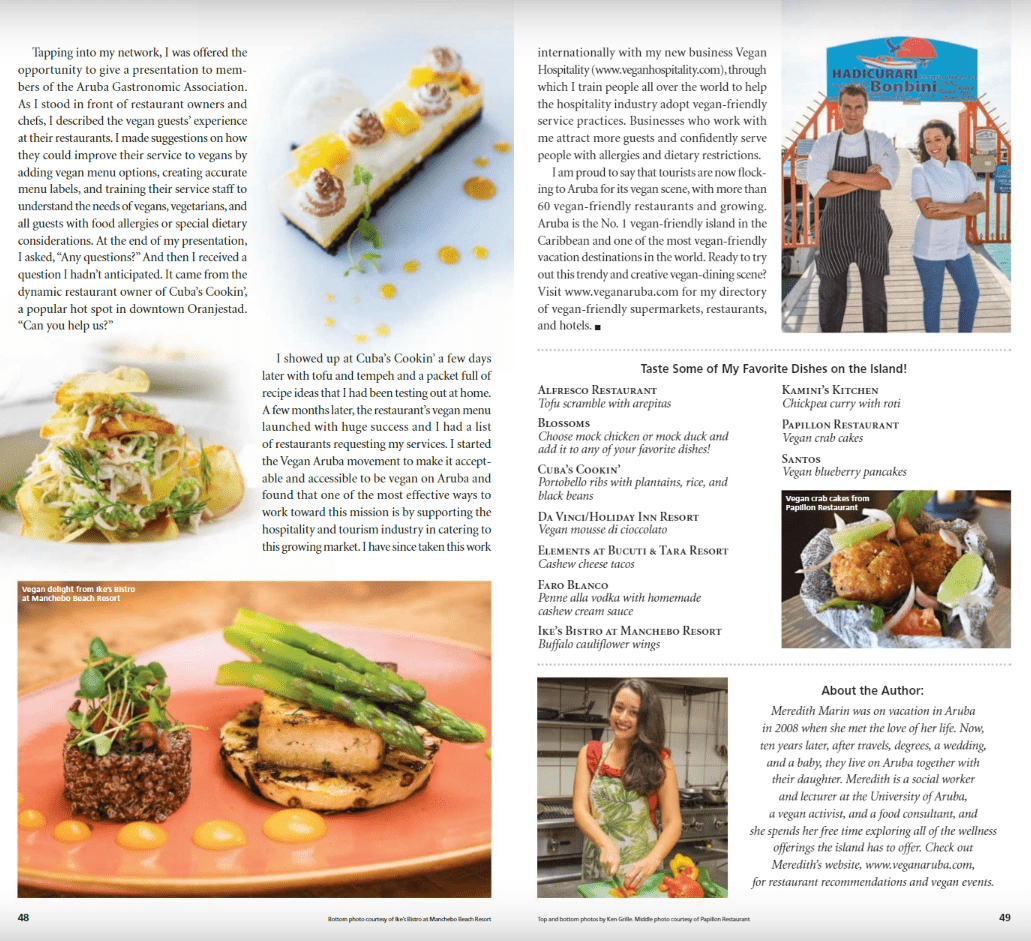 Meredith also partnered with the Aruba Tourism Authority to create a sponsored trip for six influencers from North America to visit Aruba and promote it as a vegan-friendly island. “This was a big turning point in raising visibility for the changes that were happening on Aruba. The tourism board paid for flights, and I partnered with hotels and restaurants to provide free rooms and meals, as well as activity vendors to provide tours of the island and free gifts. This press trip led to millions of views from the combined channels of these six influencers on YouTube, Instagram, Facebook, and blogs,” she said.

A couple of influencers who joined were Remy Park (@veggiekins on Instagram) and Jasmine Briones (@sweetsimplevegan on Instagram). “Their vegan travel guides for Aruba still come up with great SEO even though the trip was several years ago,” Meredith continued. 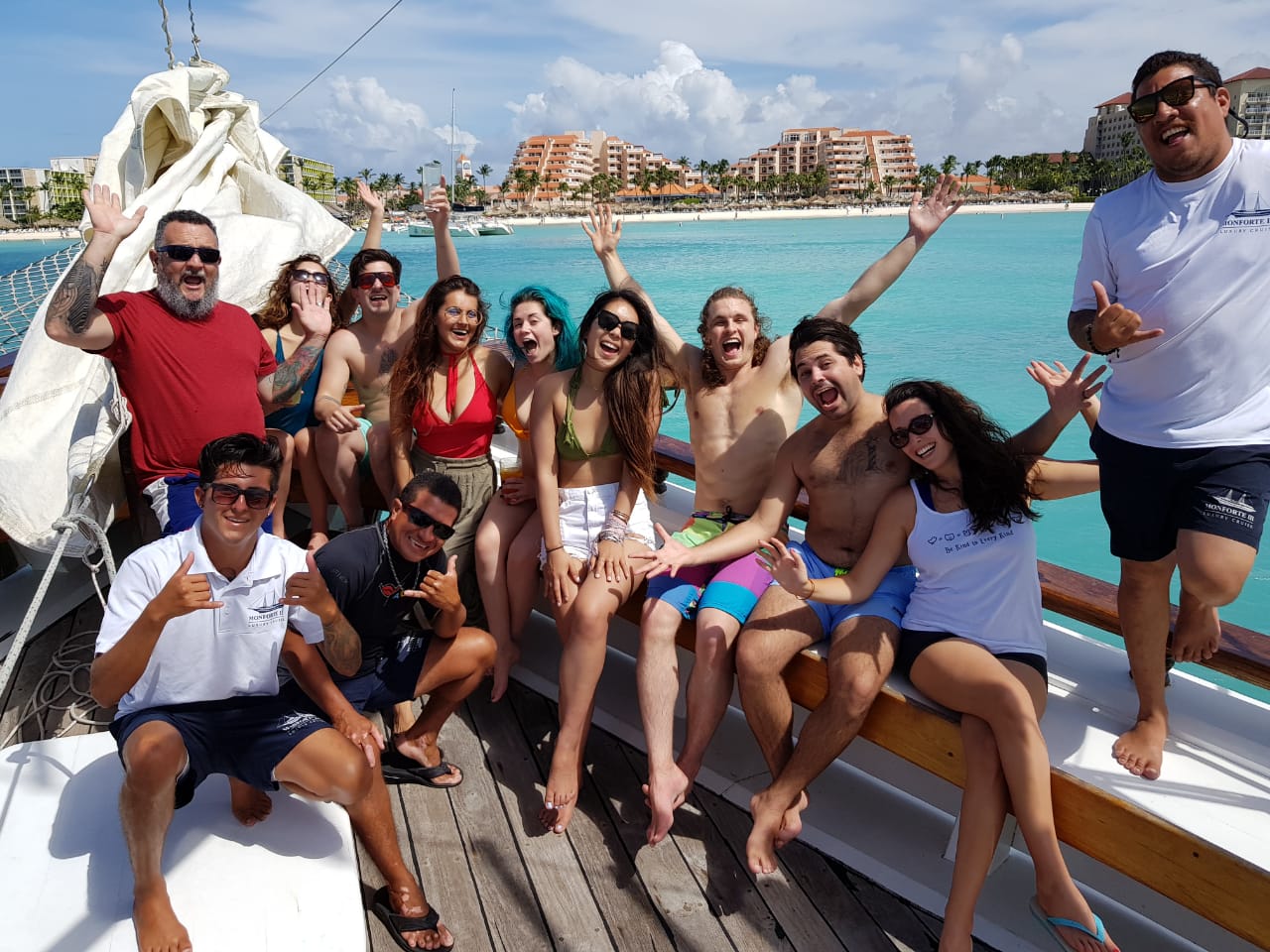 The power of digital marketing to advocate for veganism

After running Vegan Aruba for two years, HappyCow named Aruba the most vegan-friendly island in the Caribbean. (That fact turned into this story on The Vegan Review!) Meredith then founded Vegan Hospitality to widen her scope.

“I built a community through Instagram and Facebook with clear branding and a hashtag that encouraged community members to contribute and get re-shared. The handle @veganaruba (on Facebook and Instagram) and #VeganAruba were ways to spread the word to the vegan-curious folk on the island and show people that it was possible to live a vegan lifestyle there. Once a community of both locals and tourists had a point of contact, they started to be vocal about their needs, which showed restaurants the demand for vegan food on the island,” said Meredith.

She also used social media to create public pressure campaigns targeted at restaurants. “I would comment publicly on restaurant social media pages asking if they would consider adding vegan options. This was a great way to start the conversation and eventually led to my work supporting chefs in creating vegan menus,” said Meredith. It’s true—social media comments work both ways. Vegan customers can get more vocal and demand what they want from businesses—restaurants or otherwise—and businesses can learn about what their customers want.

You can read my book to learn more about how Meredith launched her second business, Vegan Hospitality just before the pandemic.

Vegan Marketing Success Stories is now available in ebook, paperback, and audio on Audible. Visit my products page for all the links.