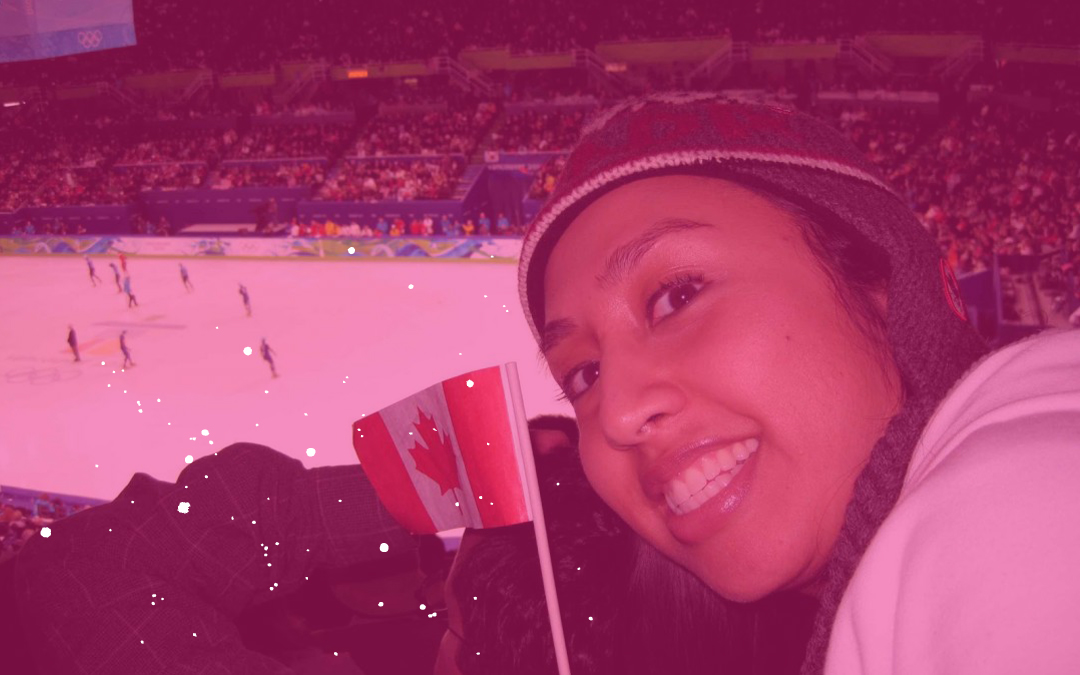 The final 3 days of the Vancouver 2010 Olympic Games were what Leo would call “Olympic Weekendation.”

After work, we headed down to the Pacific Coliseum, courtesy of a complimentary Translink bus ride. It was a rainy and scalper-filled walk from the stop to the Coliseum, which had the same security metal detectors as all of the LiveCity sites. As with the zipline wait, I practiced my faux karate moves to keep warm.

We missed a few of the prelim races before we got to our seats, and learned that Canadian Charles Hamelin made a World Record for the 500m. men’s quarterfinal race, and China’s Yang Zhou made a World Record in the 1000m. women’s semi-final race. I could hear the stadium cheering for USA’s Apolo Anton Ohno, who I am a big fan of from Turin, but wow, did Hamelin gave him a run for his medal or what?

Charles Hamelin and Apolo Anton Ohno got the final 2 spots in the 500m. final race.

One of my favourite parts of the races were announcements of the racers at the start line. I don’t know what it is, I guess the silence of the stadium and the building of suspense made it exciting.

There were a lot of “GO CANADAs!” being shouted out at the start… and even a few false starts. But all in all no one was disqualified so it was a good night.

In the first race, Hamelin was dominating the race until Korea’s Sung Si-Bak took the lead – until he literally bailed at the last second before the finish line. Francois-Louis Tremblay, in third place in front of USA’s Ohno, bailed as well, so it appeared that Hamelin won gold, Ohno won silver, and Si-Bak crawled into the bronze. Ohno ended up being disqualified because of a touch on Tremblay’s back, which according to the official, caused his fall. Hamelin was the unquestionable gold winner, while Si-Bak won silver and Tremblay, the bronze.

Leo and I were going crazy, along with all of the other Canadians in the crowd. We were surrounded by quite a few Americans, who were probably cheering because they thought Ohno won a silver. 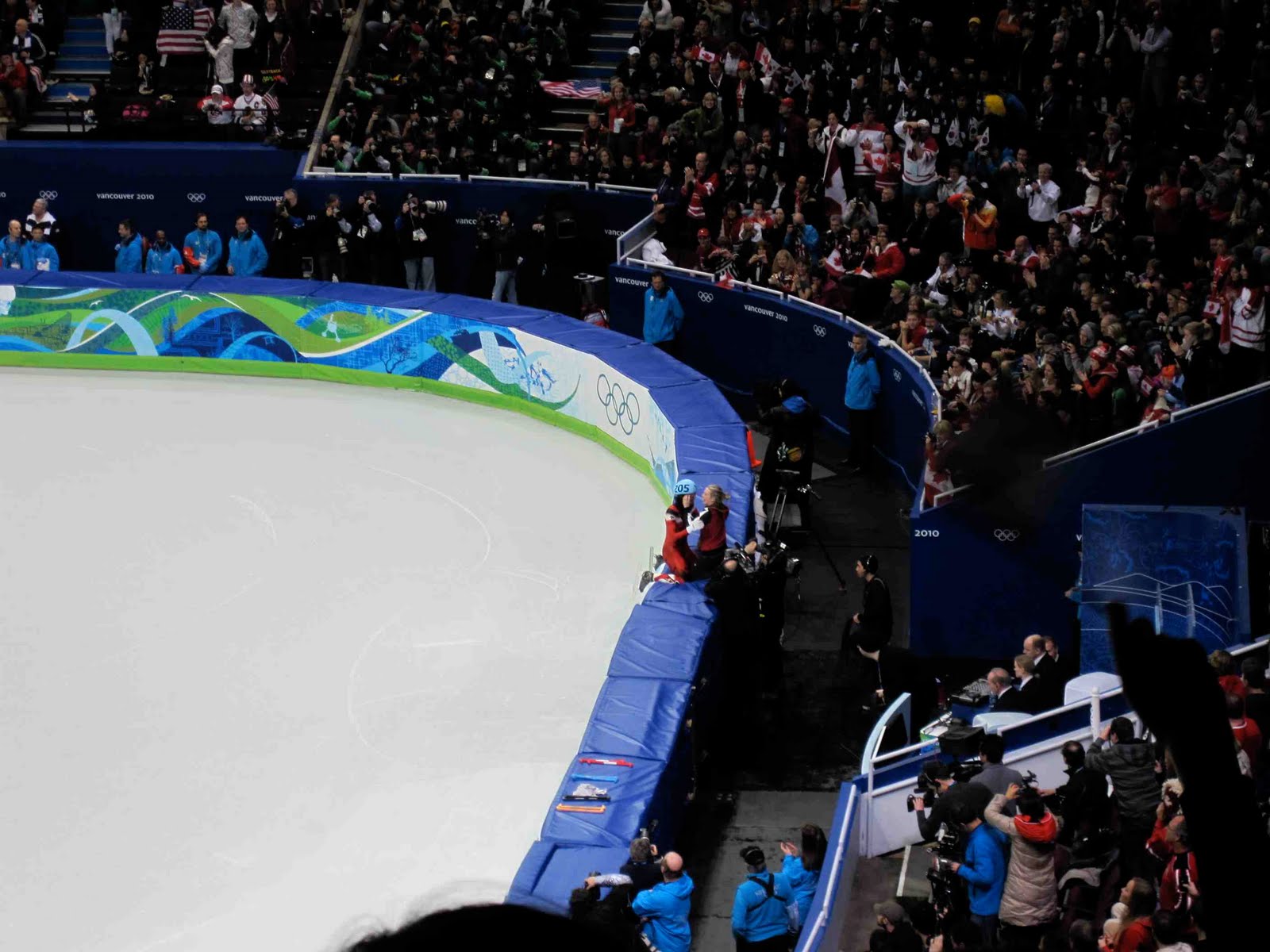 Hamelin got a congratulatory kiss from silver-winning girlfriend Marianne St-Gelais, which was nice.

I didn’t get great footage of the ladies’ races, but the Canadians ended up not making it to the final race. It was China’s Wang Meng and world record holder Zhou Yang against USA’s Katherine Reutter and Korea’s Seung-Hi Park. 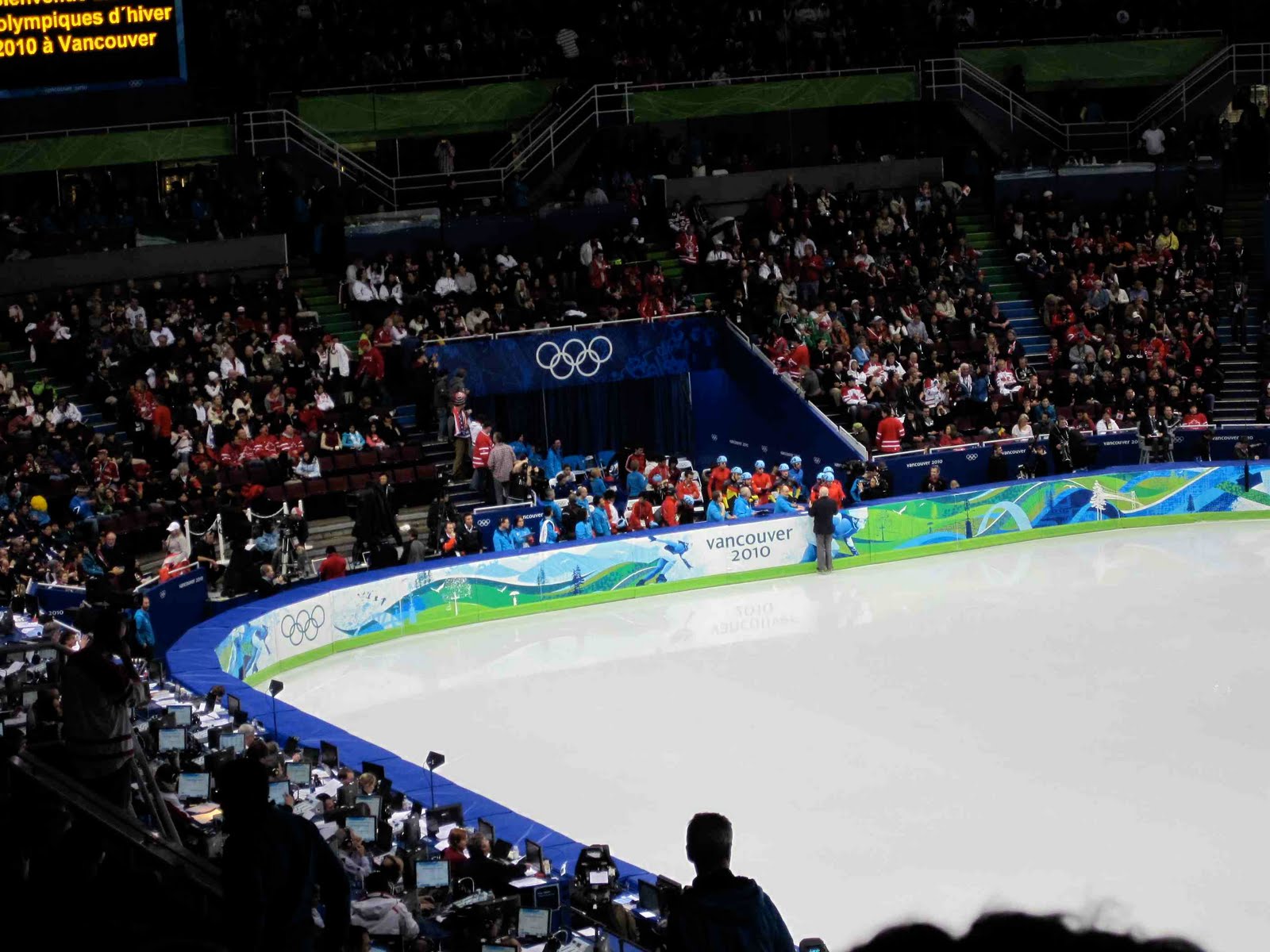 During the Zamboni break, I was already getting psyched up for the final relay race. I could see the teams lining up behind the rink and I was getting excited. I was also thinking about the men who had to race right after the 500m… but I quickly took it out of my mind because I wanted to give them positive vibes… I suppose they are already used to that pressure anyway.

Seeing the teams warm up and the 20 men on the ice (plus the officials) was awesome… the experience of mayhem was definitely worth the $120 ticket! 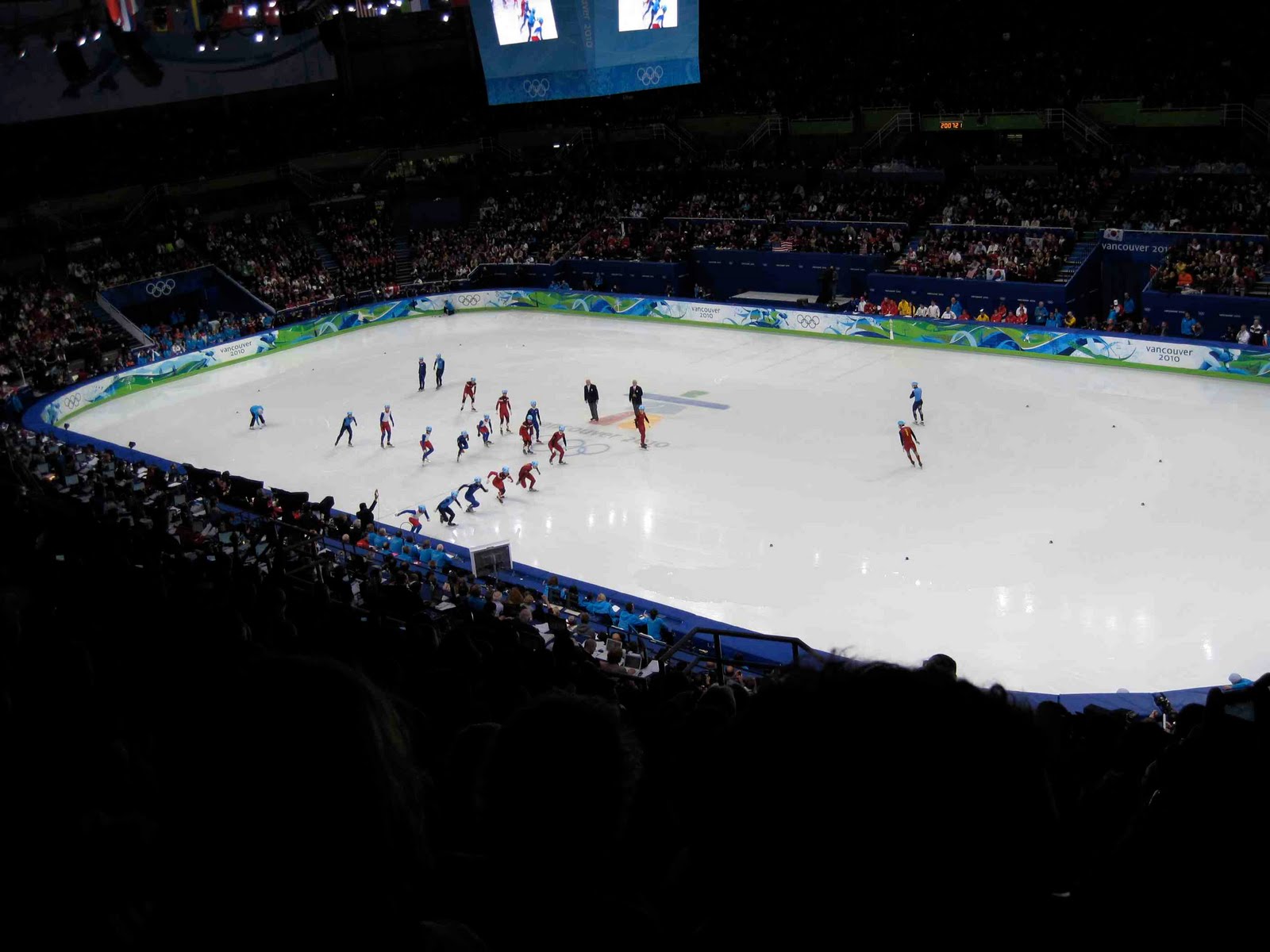 The teams line up at the start… 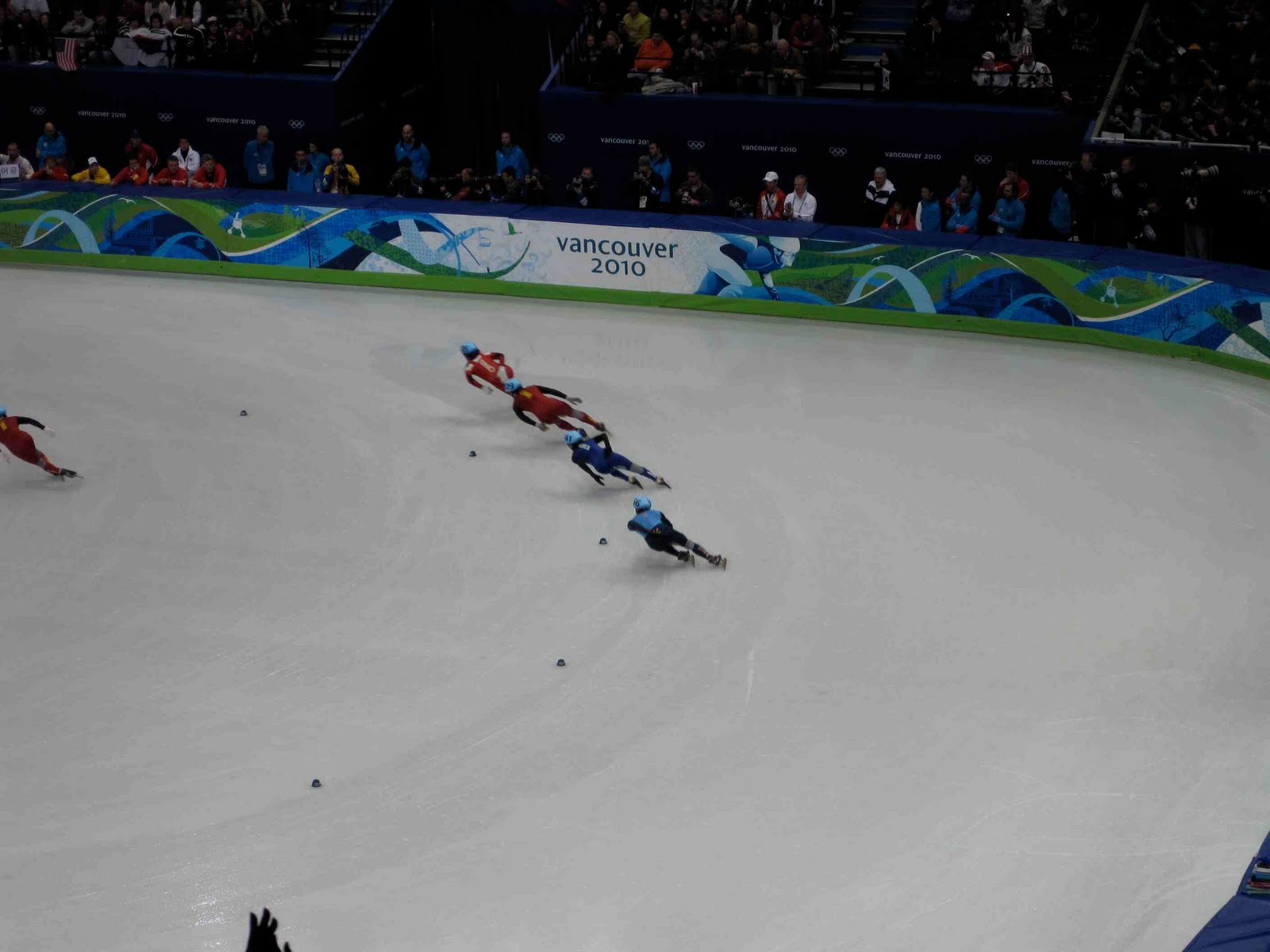 Canadian world-class starter, Charles Hamelin, gave us a good lead against the other teams. 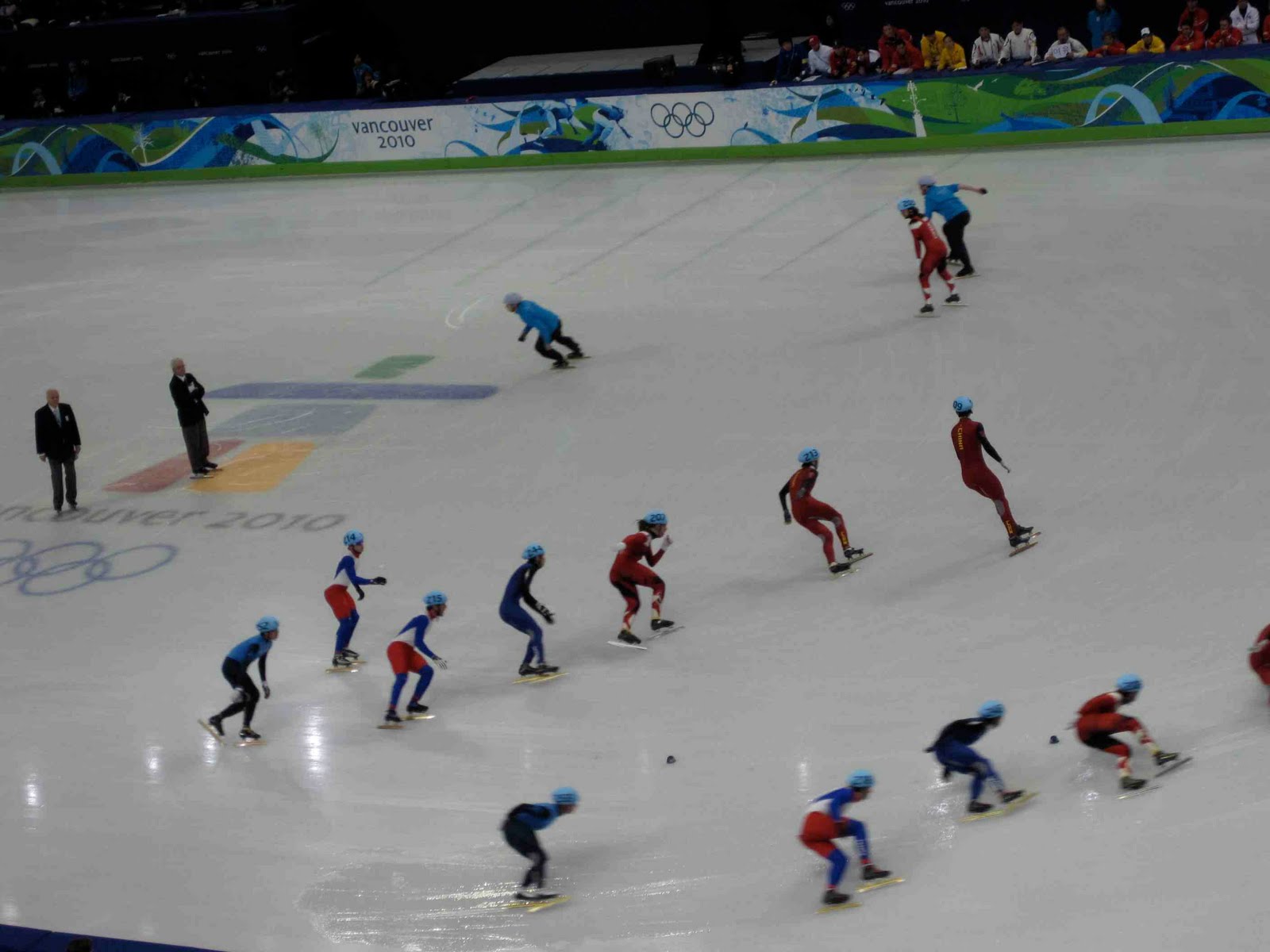 About mid-way through the race, China started stepping up and took the lead from us. With Canada right behind them, I was confident we would still be in the medal running. 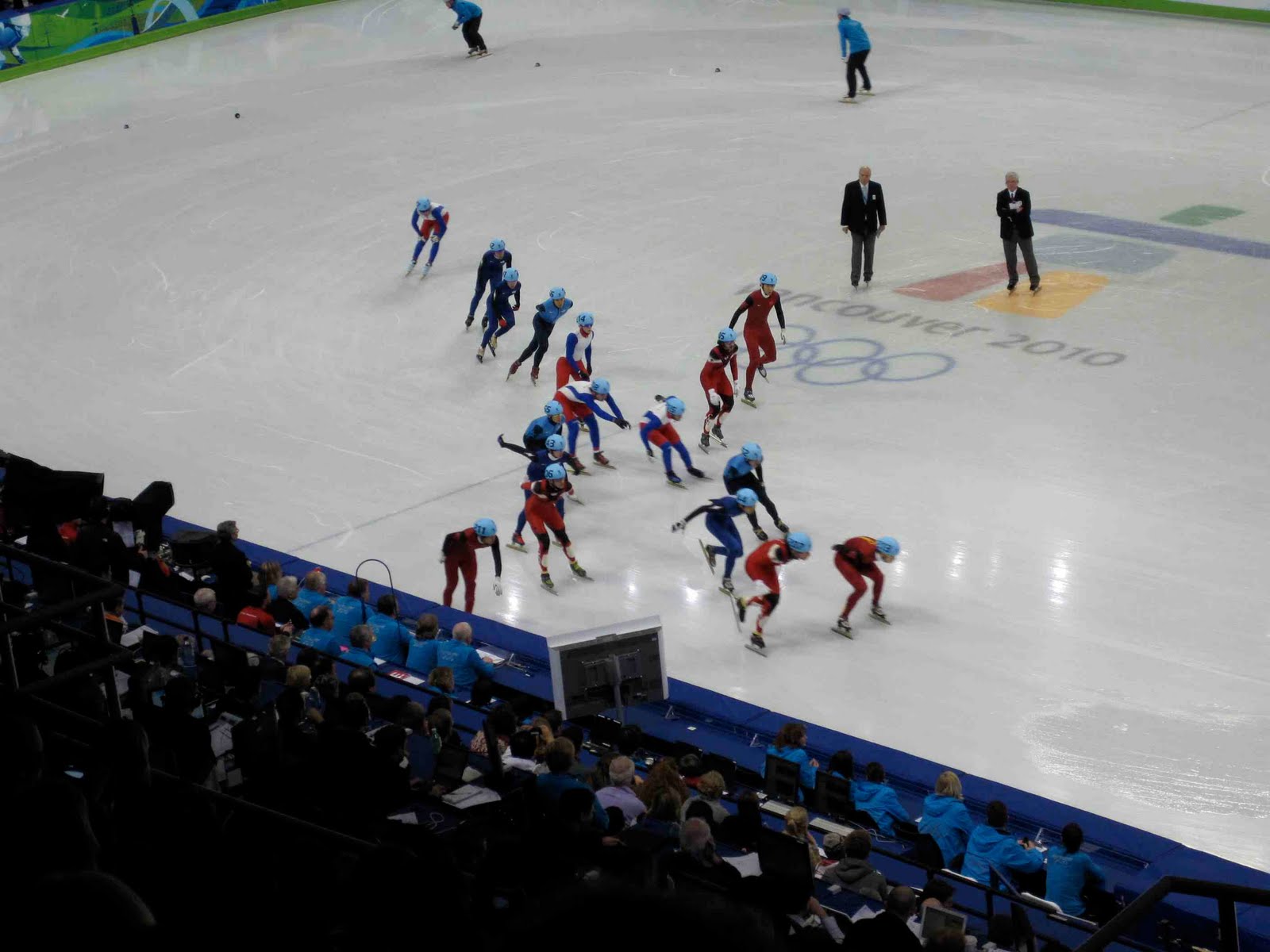 This is my favourite action shot of the night – it truly captures the mayhem especially at the push point when the teams nearly collide to pass each other off. Again, we’re right behind China and the other teams are right behind us.

France, which was included in the race due to a disqualification by Germany in the semis, ended up being far behind in the final 10 or so laps of the race so it was pretty clear they were out. Korea is known for their sneaky passes, so in the final 4 laps Leo and I were going nuts shouting “GO CANADA! You can do it!!!”

After overtaking China, we managed to keep our lead, with Korea winning silver and Ohno’s American team winning bronze. What a night for Canada… the Koreans were very respectful, shaking our teams’ hands and kissing the ice. Ohno did his own little victory lap and I wondered if he’d be back. Turns out it wasn’t the gold-studded Olympics he’d anticipated. Sorry USA, this just wasn’t your year.

I was cheering so much I could barely hold the camera steady… but it was truly an amazing feeling – even for the Americans and Koreans in the crowd too, who also shared the podium. 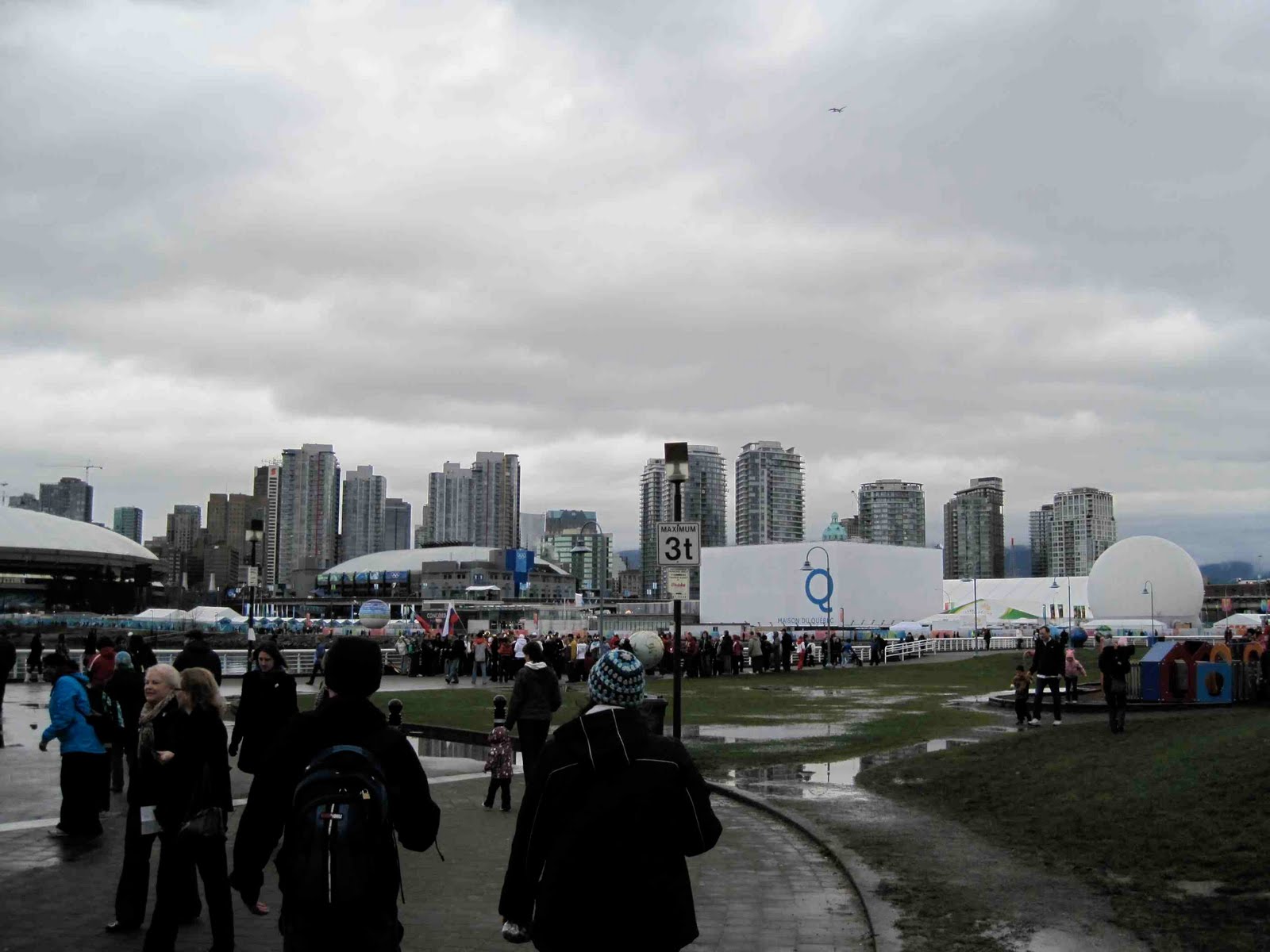 Leo and I hopped onto the Canada Line and got off at the Athlete’s Village to go to the Sochi House and the other houses on the Concord lot.

What we found when we finally got there was an anticipated 6-hour lineup to get in. I can tell the Sochi house would have been beautiful if we had waited, but there was much more to do that day so we skipped the long line.

I really loved the Sochi track suits, especially the ones in blue. But, this being Canada’s weekend, I posed with the red  and white ones.

After seeing the lineups at Maison du Quebec (Quebec House) and Ontario House, we headed to LiveCity Yaletown. I would have liked to see Ontario’s 4D show, but the line was ridiculously long, and I heard that it’s basically a tourism video with some water spray. BC Pavilion‘s 3D show was rather good though, so I didn’t feel like I was missing out on much. 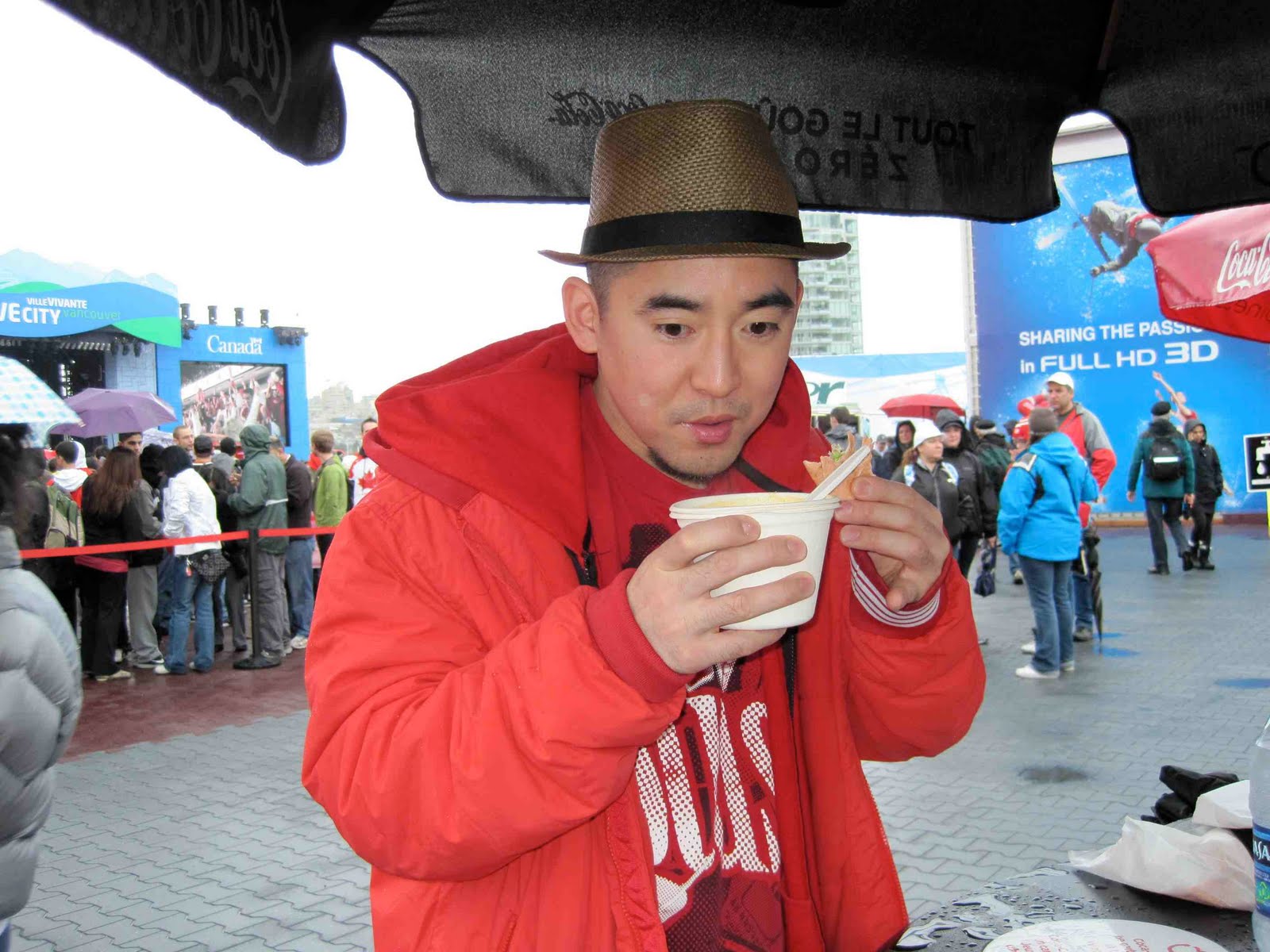 We stopped at the International food court at LiveCity Yaletown, and Leo got some Jamaican soup at the Taste of Jamaica stand. He said it was one of the best soups he’d ever tasted, and even asked the workers if they had a real restaurant here. Unfortunately, they are a mobile supplier.

We’d been standing most of the day with the exception of Skytrain rides, so we rested a bit in the Vancouver Pavilion lounge. Then we waited in another line, about 20 mins. for the Panasonic 3D show. Inside the Panasonic Pavilion, they showcased their 3D TVs and one of the features was a device that could scan people’s eco-friendly tips and broadcast them around the world.

It was awesome to see Canada win a few more golds at LiveCity – you can bet the people were in good spirits and cheering… that meant that it would all come down to the final men’s hockey game on Sunday – if we won, we’d break the record for the most golds won in the Winter Games.  No pressure, boys!

Before we left Yaletown, Leo was feening the soup again so we took another break. Too bad they didn’t make this area covered with seating, like at the LiveCity Downtown site.

On our journey we walked by the Irish House – which also had a lineup. We settled for Moxie’s on Georgia Street for some nice snacks in a booth, and our view of the men’s gold medal curling game wasn’t bad.

After getting back on the Canada Line, we drove down to Vanier Park to see the Vectorial Elevation Light display. It was quite cool, and we attempted some jumping shots which aren’t really worth posting here.

We rested up and got up early on Sunday aiming to line up for the Heineken House at the Richmond Ozone at 10:30am. Luckily, the line wasn’t very long, and the gates to the Ozone weren’t closed prior to its opening at 12pm, so we made it in time to see some of the booths and grab our spot.

I was quite impressed with the Holland Heineken House shop, although most of the merchandise was already sold out. All that was left were hooded sweatshirts, socks, and luggage… and you can bet that people dragged that luggage outta there. 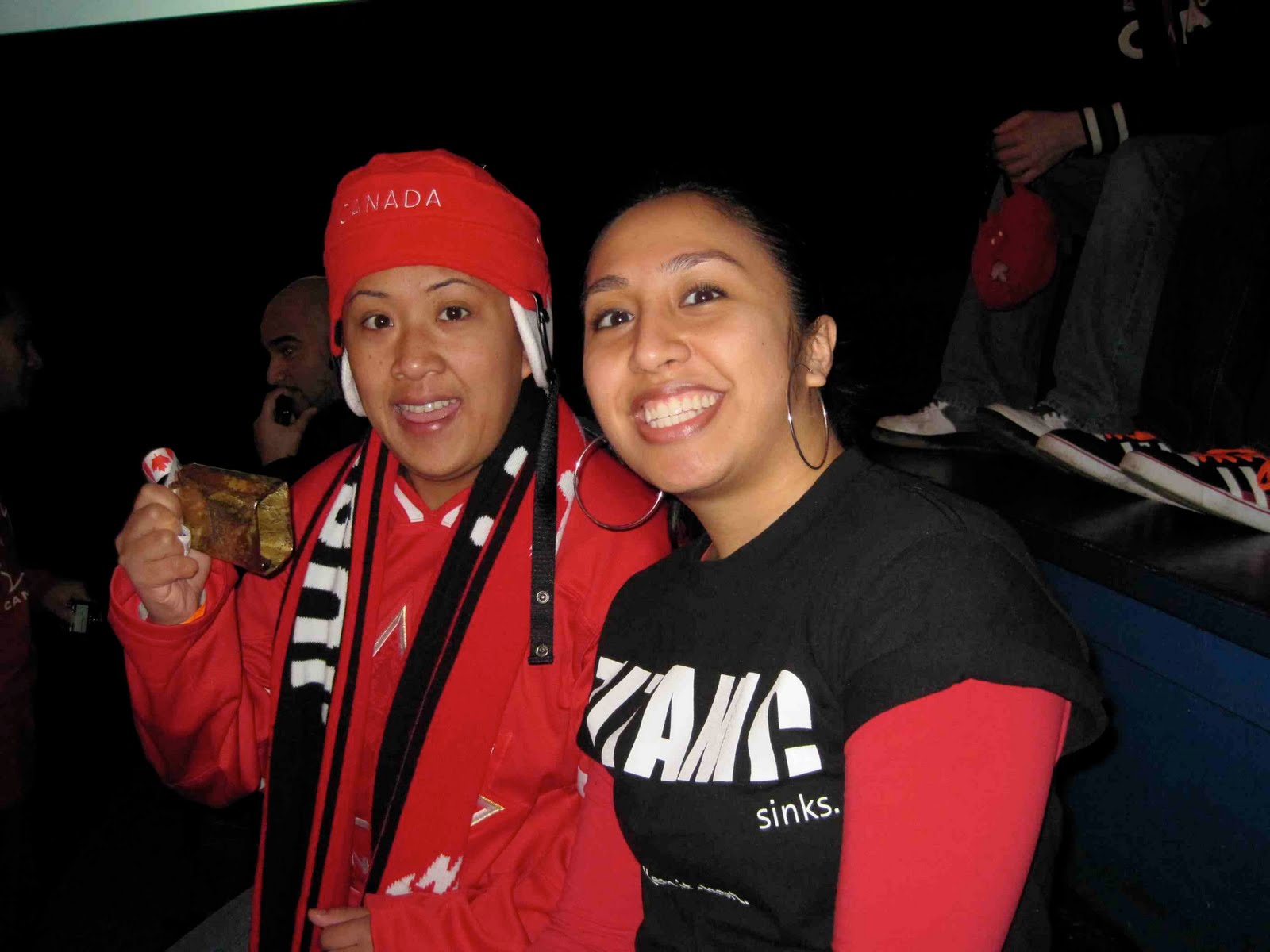 Gail arrived with gold belt, jersey, scarf, helmet hat and cowbell in hand. God, I love cowbells. Hers was loud. The best kind.

During the game, I missed Canada’s first goal. In the last 4 minutes of the 3rd period, people already began to stand, ready to cheer for our gold medal win – and then Kesler scored to tie the game up 2-2. Leo was going nuts – he couldn’t take the suspense. In my head I was thinking we would do it. We just needed that one shot, and the gold would be ours.

And then Sidney Crosby scored! 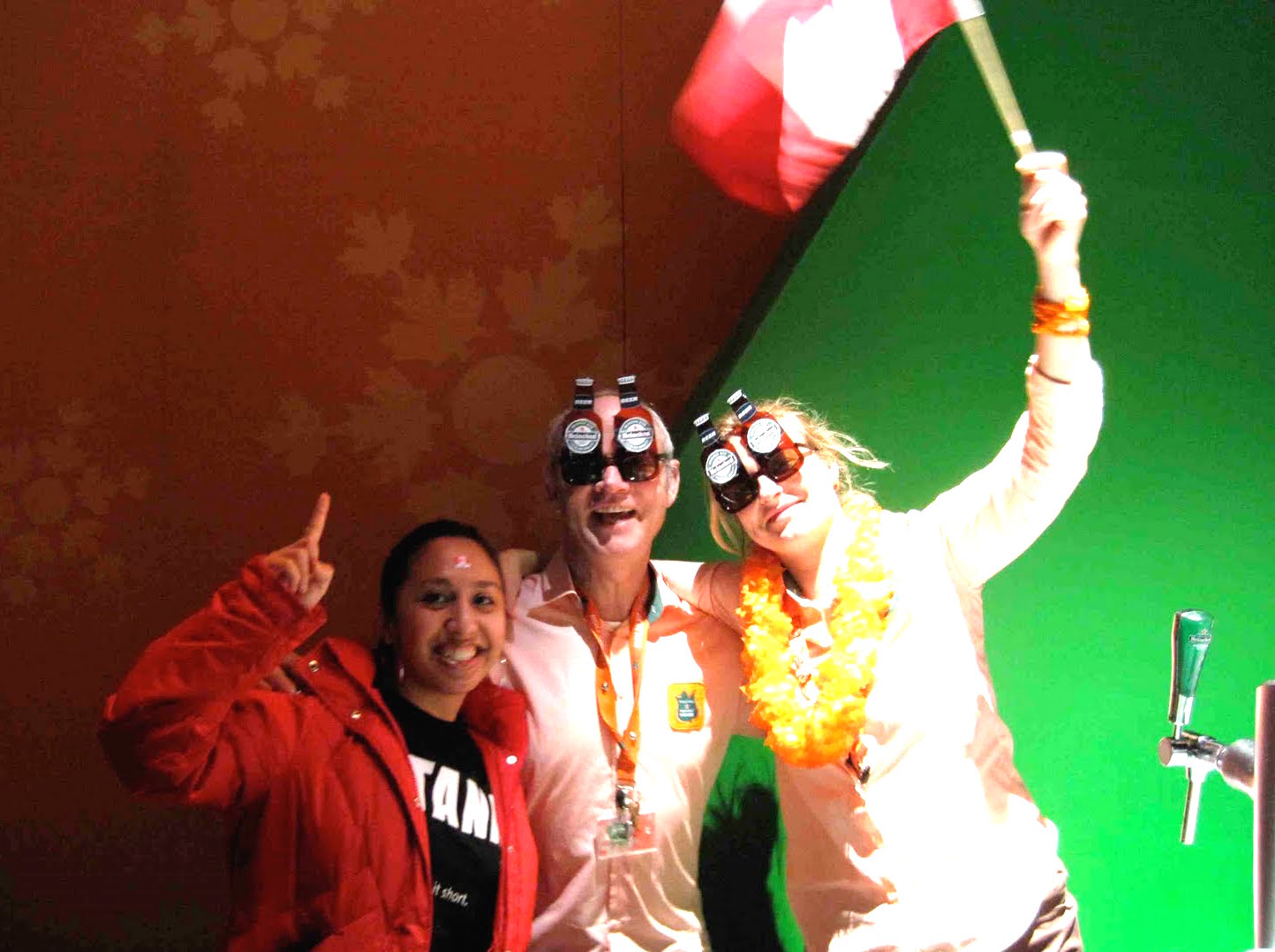 Before we left, I got a shot with the bartenders, who were in awesome spirits, even though Holland wasn’t involved in today’s game.

The Heineken House will always have a special place in my memory… the place where I was when WE WON GOLD. I wish that I would have been able to party here more – no wonder it was notorious for the lineups at night. 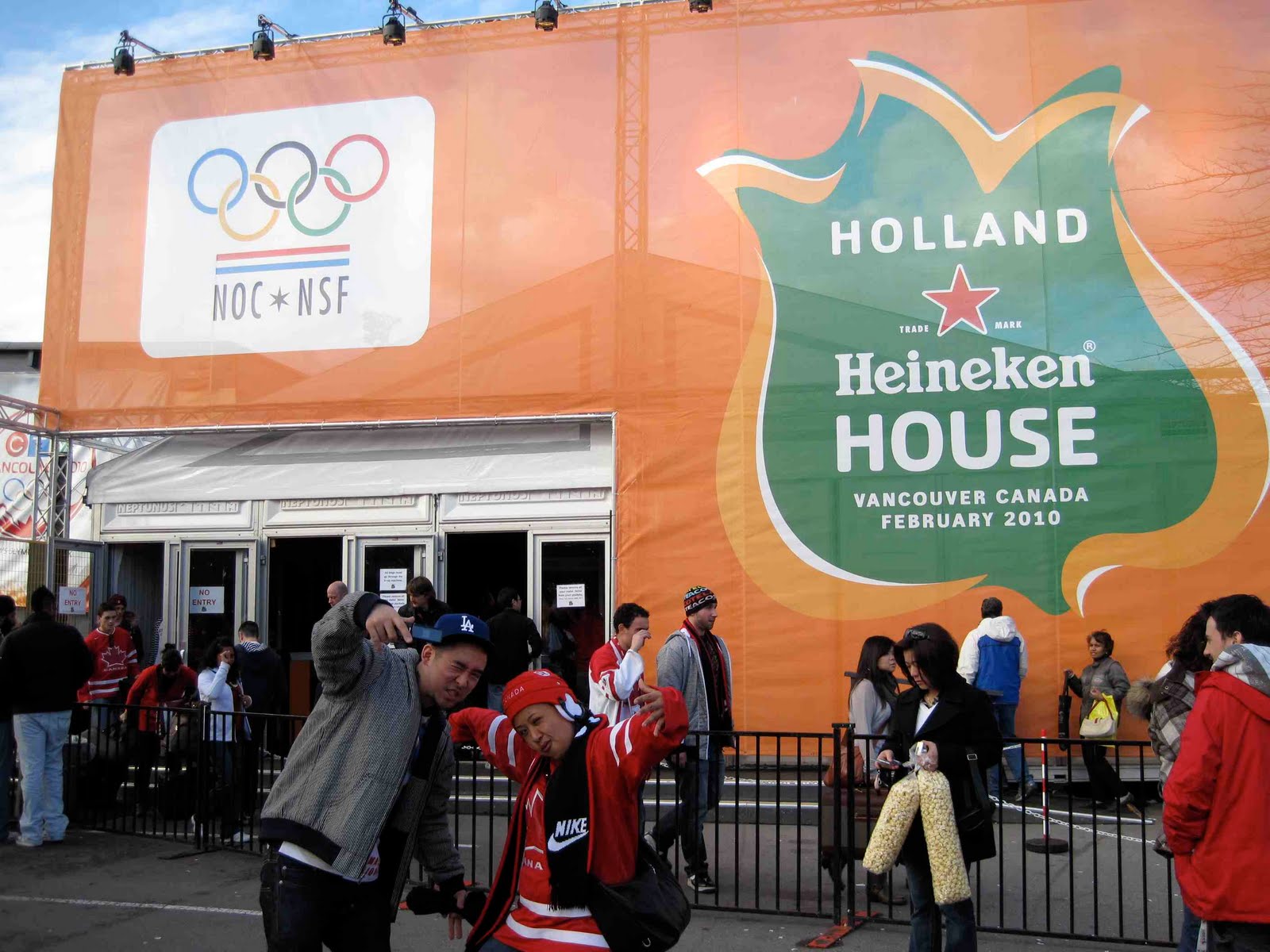