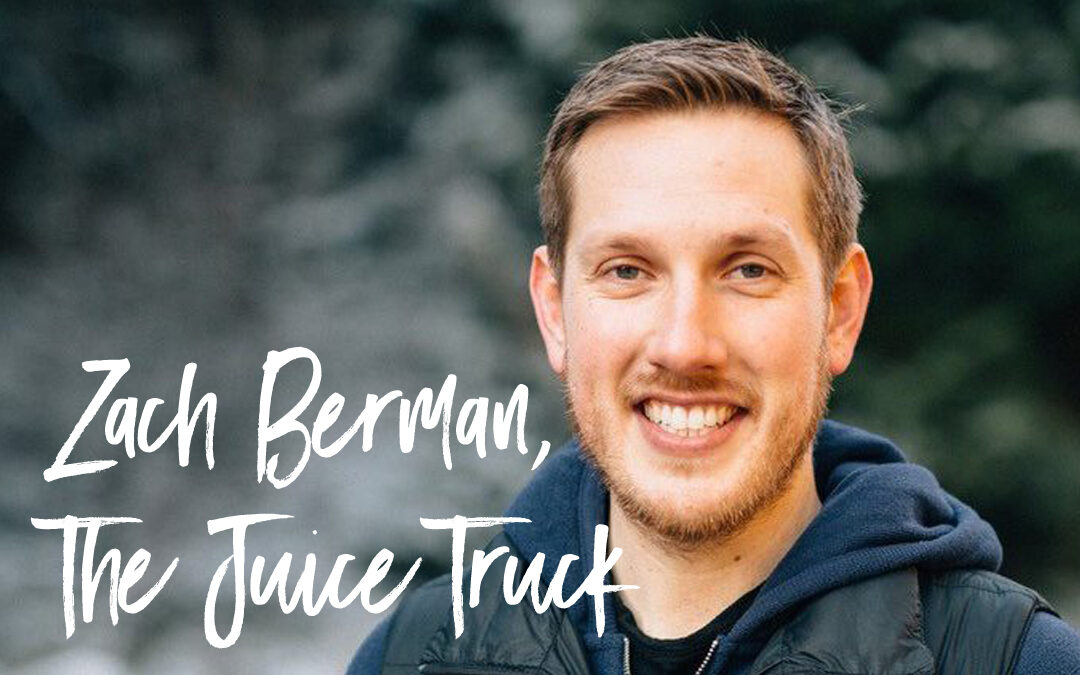 The Juice Truck is Vancouver’s first and original cold-pressed juice company, and it happens to be vegan. It was founded in 2011 by Zach Berman and Ryan Slater after a year long back-packing adventure through Nepal and India. Inspired by the mobile juice carts of India and the local superfoods nourishing the locals even at the highest of altitudes in the Himalayas, Zach and Ryan came home ready to launch Vancouver’s first cold-pressed juice company.

They support local produce and organic farming practices as a way of extending their passion for healthy living beyond their cozy corner. In the case of fruits and vegetables that aren’t locally or seasonally available, they take a long look at potential suppliers to verify their growing standards and ensure practices measure up to their standards.

I first became a customer when the physical truck was parked at the Vancouver Food Truck Festival and in Gastown in Vancouver. Zach came into my radar when he and local vegan baker Erin Ireland began hosting screenings of plant-based/vegan-related movies in Vancouver, and started the Plant-Based Vancouver Facebook group.

The Juice Truck acquired a retail juice business and now has six locations across the Lower Mainland of BC, including in two Whole Foods locations. I never thought of it as a “vegan business” but that’s what I love about it—the stealth plant-based approach! Naturally, I wanted to hear what Zach had to say about what makes the business so successful in terms of marketing.

The importance of relationships in business

Zach’s entry was so short, I almost cut it from the book, but I’m glad I didn’t because it ended up being an important contribution to a section on partnerships and collaborations in the Public Relations chapter. I wrote:

“For retailers that rely on product-based companies, relationships are extremely important. For Zach Berman of The Juice Truck—which has several locations employing eighty-five people in the Vancouver area—relationships are the key to success. ‘Transactional relationships are usually short-lived,’ he said.”

He continued: “Our goal is always to connect in a genuine sense, to make a connection, to build a relationship—ideally a friendship. Collaboration over competition. We never have an expectation of any promotion or social share.”

There’s a lot in Zach’s short amount of words to unpack. If you know that The Juice Truck began by selling juices and look at where it is now, you’ll know how important relationships and community are to the business. When you serve food or juices, you need good relationships with food suppliers. When you’re a retailer (which TJT is on its Main Street location), you have to maintain good relationships with product suppliers. The Mount Pleasant location has a long table where customers can do work as they enjoy food or beverages, or even reserve space for an event outside café hours.

Even though Zach says they never expect a social share from either a supplier or the public, I’m sure the way he and his team interact with others have a positive effect that makes people want to share about how good this business is in quality of food, sustainability efforts, and community outreach. A nicely-designed cafe also helps! In our online world, that goodwill can’t be bought.

Zach continues to grow his relationships online through his podcast, A Little More Good, which he co-hosts with Dean Morris. They’ve collaborated (there’s that word again!) with the Planted Expo to host two live interviews with Rich Roll and Ali Tabrizi of Seaspiracy.

PS: TJT has a points system (a sales promotion tactic) for regular customers, and was one of the first food businesses in the City of Vancouver to have compostable take-out containers. It’s always been ahead of its time!

The Vegan Marketing Success Stories ebook is now available to purchase on Lulu.com and other sites here. The print and audio versions launch November 1 on Lulu’s bookstore and Audible.