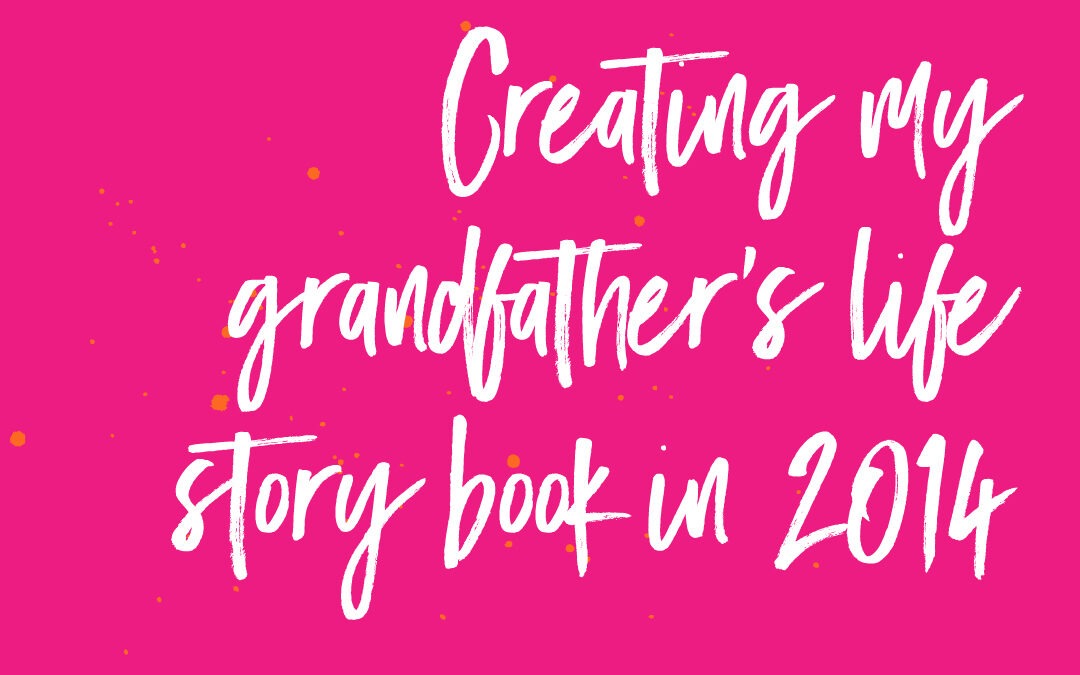 How I would create my grandfather’s heirloom book differently

From elementary to high school I somehow gained the reputation among my family as “the writer.” It was a combination of my mom being friends with the publisher of our local Filipino community newspaper and making me print stories about my vacations or scholarship application essays, and then majoring in English in university. By that time, one of my uncles had pressured me to publish an article about my paternal grandfather’s time in the army and participation in the 1942 Bataan Death March.

In my junior university year, a few of my English courses focused on biographies and oral translations. That inspired me to perhaps start on something around my grandfather’s life. By this time, he was almost 90 so when I sat down with him he couldn’t remember much, and what he did say was very straightforward. (I would realize later that my grandfather was not a very expressive person unless he was really angry or happy.) For example he’d say something like “the Japanese took Manila” during World War II but I could not imagine in my mind at the time what that looked like. Today, you could easily Google what this meant and find some photographs, newspaper headlines, maybe even video footage of the war. While the Death March seemed to be a long walk without much food, his time in the POW camp must have been more life threatening as he recalls leaving and weighing only 75 pounds—yet he never expressed that with much gravity, at least in my opinion.

After that meeting, I didn’t feel I had a story but kept thinking about how to document my family’s story in some way.

A few years before my grandfather approached 100, I decided that we should self-publish his story with the goal of presenting it at his 100th birthday. After my junior university year, I had already transcribed an entire video interview my uncle made in 1998 or so. I figured—with the help of my sister, uncle, and cousin (who’d also graduated with an English degree)—we could piece together a story and fill in the gaps with photos of my grandfather and family.

I believe it was around 2012 when I asked my extended family for photos for the project. Collecting all the emails of my aunts, uncles and cousins was a project in itself! Between my immediate family’s albums, my aunt’s, and a plastic box of photos of my grandparents (and some of their ancestors) my uncle had, there was A LOT to go through. Not only did we have the old black and white and sepia tone photos and the more modern glossy colour photos, my grandfather was an aerial photographer, so he had photos of aerial views and of his travels abroad.

There was a stack of colour photo negatives from around the 50s that I had digitized at London Drugs, and the quality was still pretty amazing. 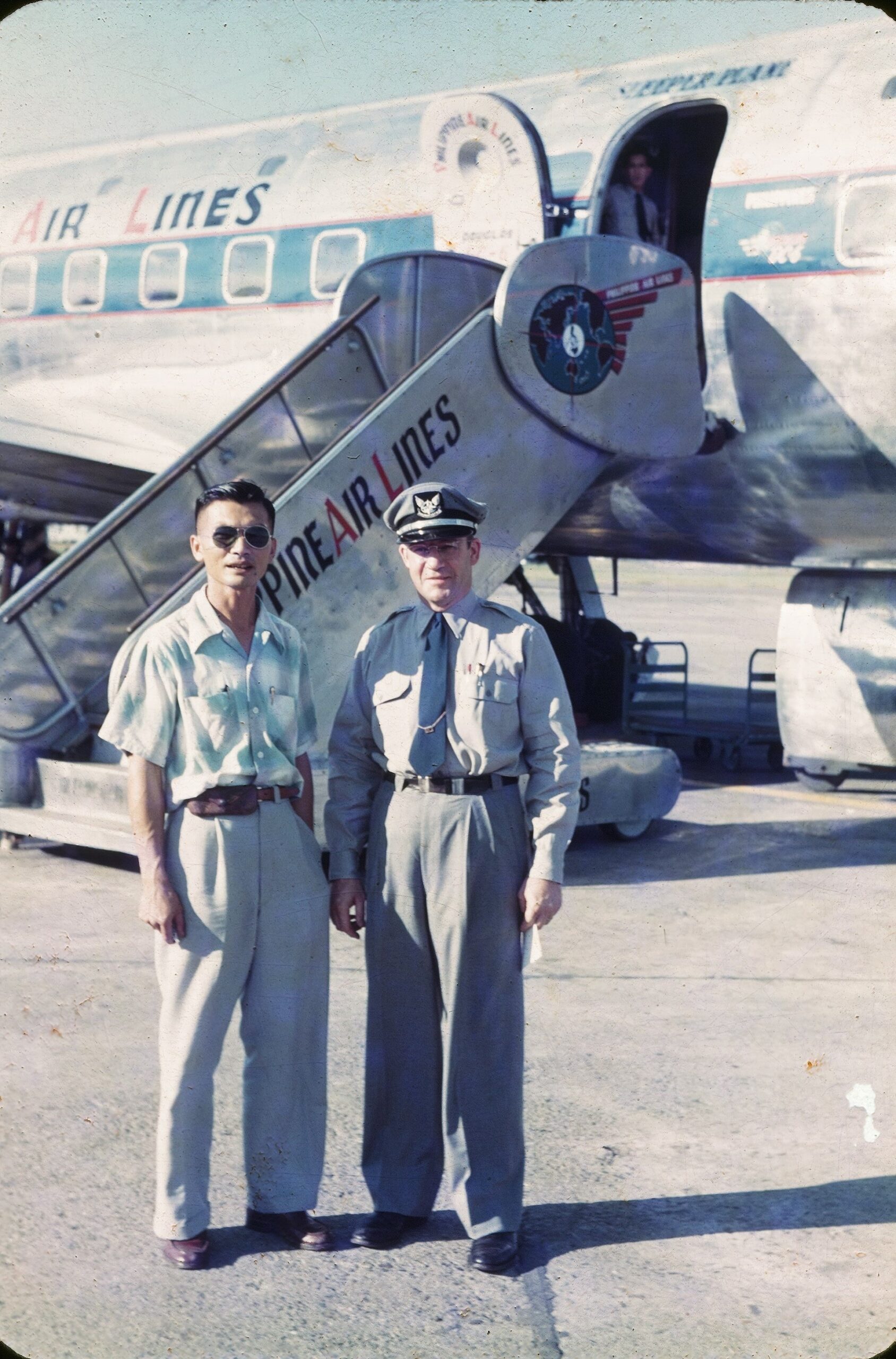 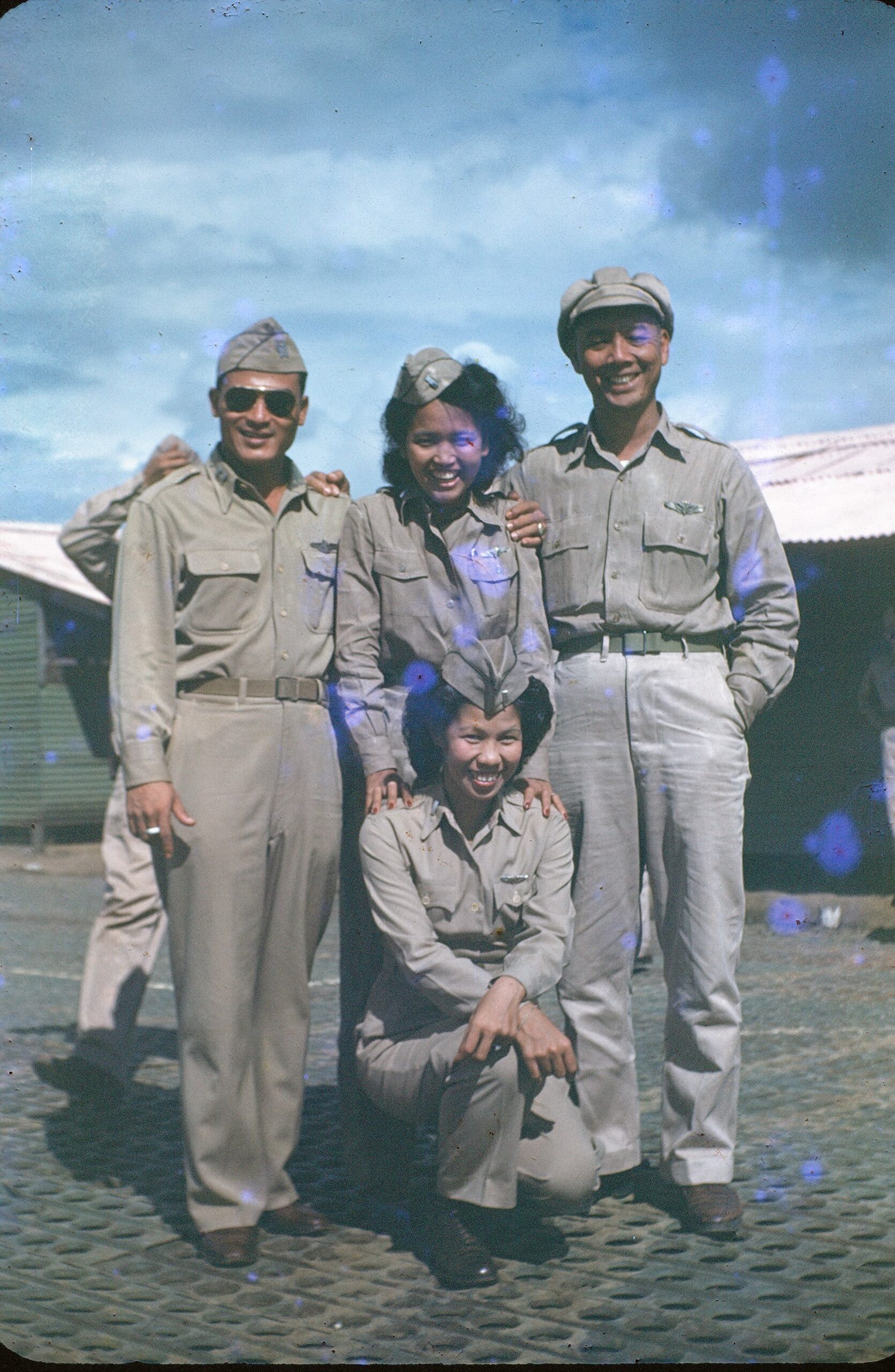 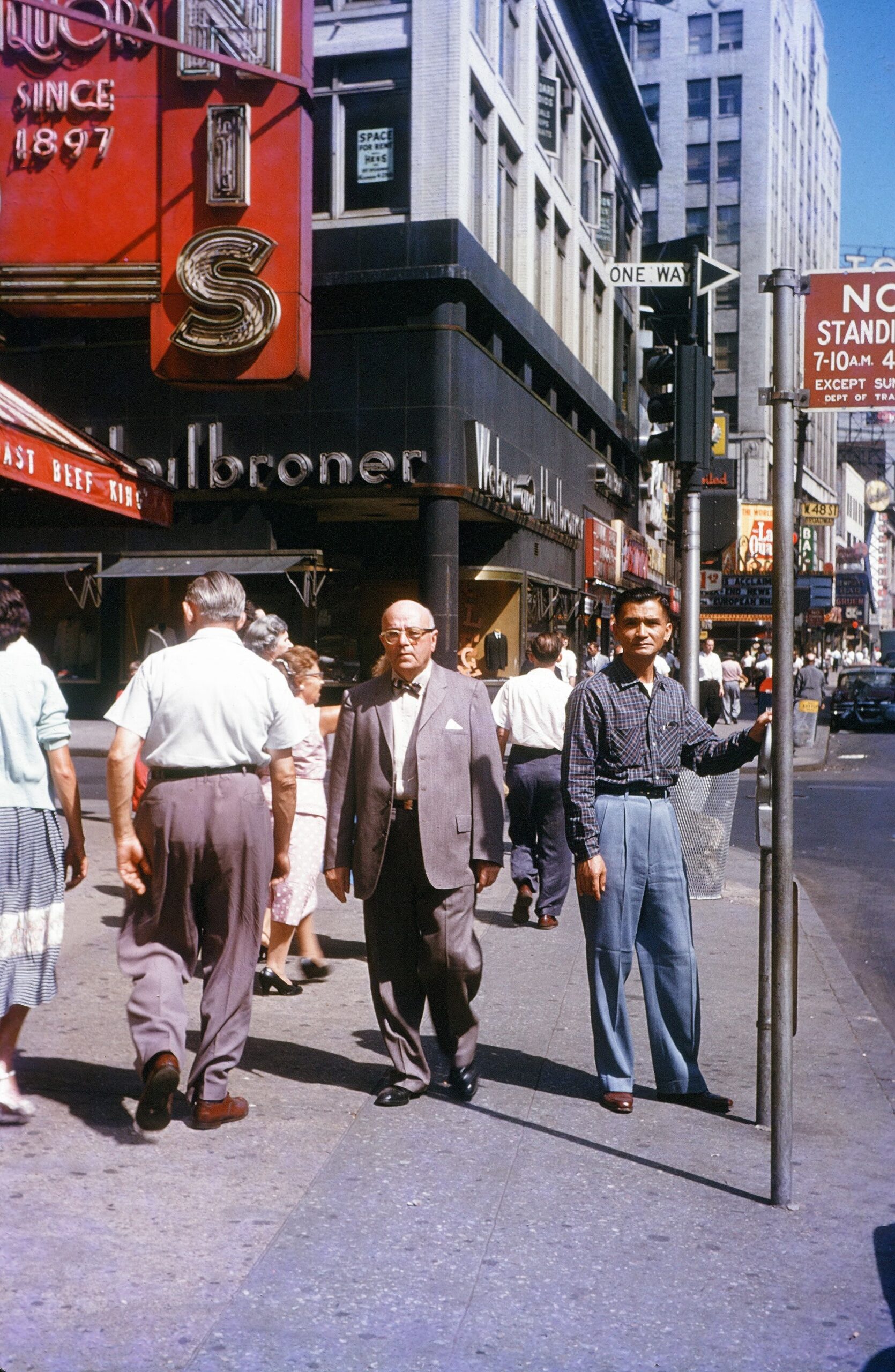 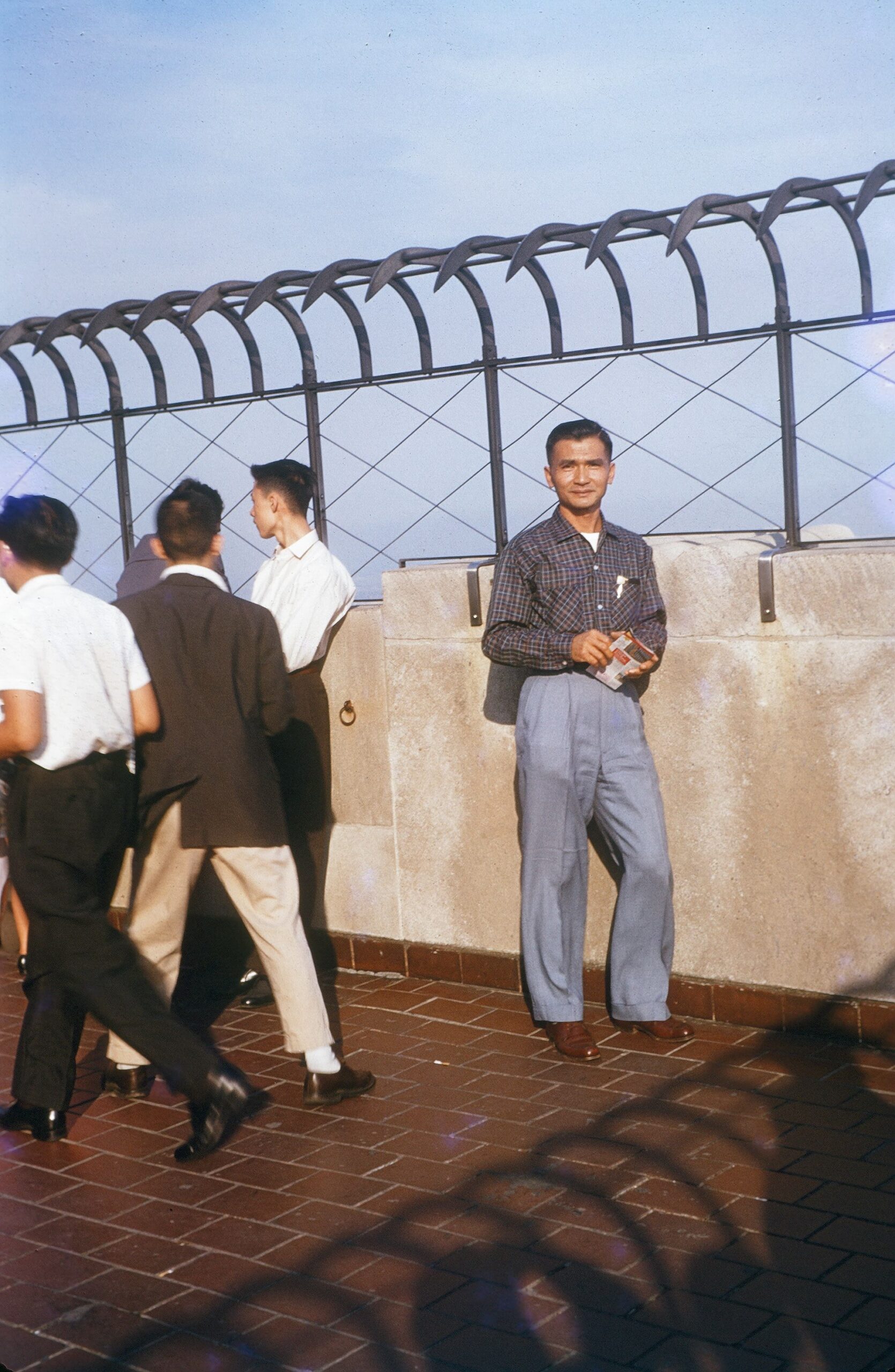 These two photos were taken in New York City, the last at the Empire State Building.

To put my grandfather’s health into perspective, he was living alone in an apartment in a senior’s complex in east Vancouver from about 1990 to 2011. At the age of 97 it was clear he wasn’t fit to live on his own and was even hospitalized. Members of my family flew from across the continent thinking those were his last days, but he recovered and was transferred to an assisted living home until he moved to the facility where he finally passed away in 2014. While packing up his belongings, my aunt found a file of documents including my grandfather’s time in the army and air force, his flight training, logs, and even hand-typed and written letters to and from government officials who sent him abroad to San Francisco to study mechanics and piloting.

In my opinion, these were some of the most interesting parts of my grandfather’s story we included as they pieced together what he went through during that time. Each document also added to the page count!

Using the interview transcription, I put together the text of my grandfather’s story and ran that by my fellow “editors.” My uncle said that it would be nice to include anecdotes from family members to give a more holistic perspective of who my grandfather was, aside from the marriage-kids-army-career-immigration milestones he passed in the Philippines and Canada. So I collected anecdotes from my sister, dad, aunts and uncles, family friends, and cousins. Some of these were Skype calls and voice recordings that I transcribed, since not everyone was comfortable with writing and sending by email. One of my uncles—who arguably has the best recollection of and most number of stories about my family—neglected to send me anything. But because I had a voice recording app on my phone, I stole one of the stories he told at the dinner table one day, and included that.

Thanks to my half-cousin who lives in Australia, I received a scanned letter from my half-aunt in the Philippines, who I’ve never met. It was really nice to be able to add her story and photos of my grandfather’s descendants on her side of the family.

Once we had the text and anecdotes, my sister and I planned a general layout of photos and documents (not easy to do, as it was hard to tell the year when many of the photos were taken). Then we had to find someone who could create the interior of the book for us.

So if I had the formatting skills I have now, we would have saved some money (and time). But then, I believed we needed the help of a graphic designer, so my sister paid $300 to a colleague with these skills, who we’d met in the self-development group we were all in.

I gave her the Word file of the text, renamed all the file names of the documents and photos, and sent her some guidelines about where the images should go. She did a great job of determining how many photos would fit on a page and recommended some of the really nice vertical photos get their own page.

The cover I envisioned for this book was really simple, and inspired by a book of poems called Execution Poems, written by my former university professor, Canadian poet George Elliott Clarke. It’s a textured black cover with engraving for the title (no colour). But instead of engraving I thought it would be cool to have the title in gold or silver (I’m more of a silver person).

My cousin’s partner, Adele Zanni, is a renowned artist, and volunteered to do two family trees for the book. Our designer had to put my family’s names in the leaves, and then Adele wrote them in before physically delivering the poster-size artwork at my grandfather’s funeral in March 2014. 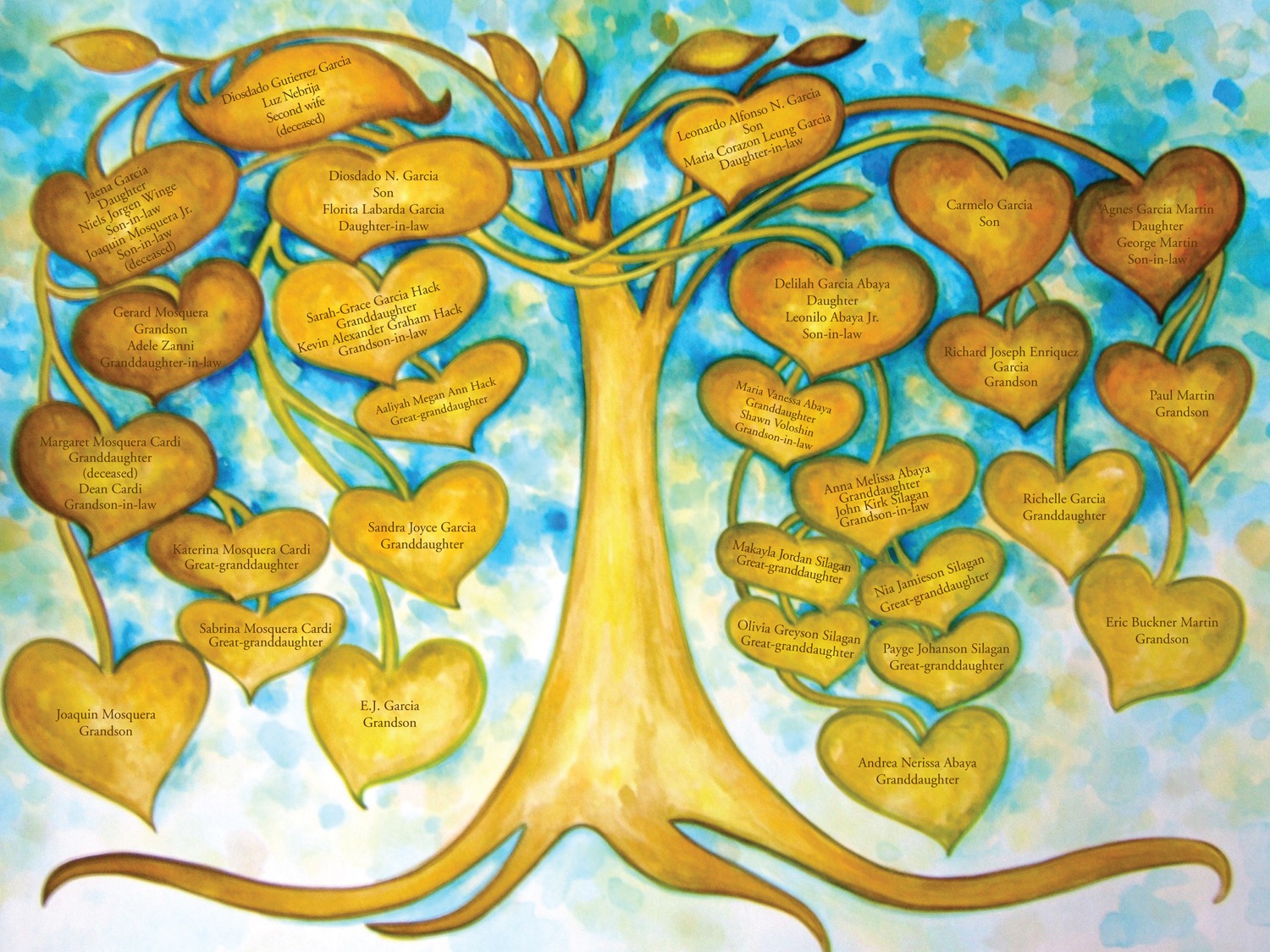 Three spouses and 3 kids have since been added to our family since this was made!

Once our designer had finished the interior, we had the file ready but in order to explain what I wanted for the cover, I had to go to Jukebox Print in Vancouver and select from their cardstock. I also chose a semi-gloss paper for the interior because good ol’ thin white wasn’t going to cut it for the colour photos. While I would have liked to support a women-owned business, I don’t know of any women who own printing companies in my city, and I hadn’t yet met broker Sussan Toub.

Even though we only needed around 32 or 33 copies of the book, I rounded the number to 35 and the total cost came out to $75 CAD per book. Not your average paperback price! But the book turned out beautifully and instead of waiting to receive payments from various family members (some of whom lived abroad), my uncle helped with the payment for the batch so we could complete the printing and distribute the books. 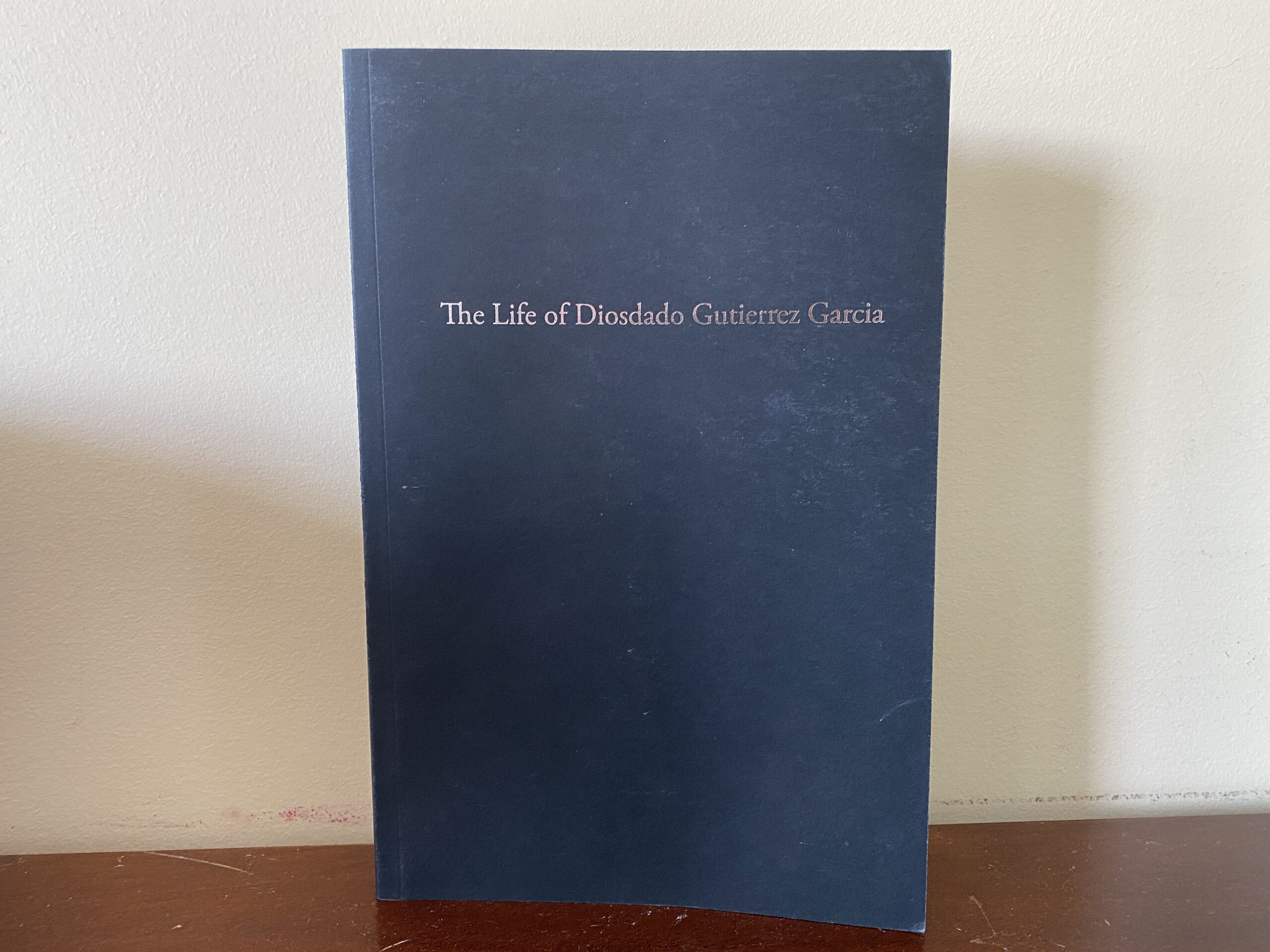 I believe using a lower stock of paper for the interior may have brought down the price, but the quality and durability of the book would not have been as high.

And while it would have been more economical to use a service like Amazon KDP or IngramSpark to print the book for us (and take a cut of sales), that would have also allowed anyone anywhere to buy the book. There are a lot of personal photos of my family in it, and one of my cousins was almost hesitant to even put his name in because I store the digital (PDF) version on Dropbox and he doesn’t ever want to be found on the Internet! I just discovered in the process of creating my second book (with Lulu, an alternative to IngramSpark that uses vegan inks and is a certified B Corp) that you can use the service to print books without putting them on sale to the public, which is exactly what we did.

I mailed two copies and the Ilagan (maiden name of my grandfather’s first wife) family tree over to my half-cousin in Australia, who wired me funds through MoneyMart (my first time using that service!). I also mailed a copy to my half-aunt in the Philippines and it took a few months to get there—I lost track of it after it left Canada Post’s hands, but she received it and sent me a letter to say thank you and some photos of her.

I still have my two extra copies of the book, which will likely go to one of my cousin’s children.

And that was one project I crossed off my bucket list!

Have you printed a biography of a family member, and if so what service(s) did you use to do it? Share with us in the comments.

Need a memoir editor to help you put together a family member’s biography so you have an heirloom book to pass onto your descendants? Read more about my services here or contact me if you’re ready to begin!