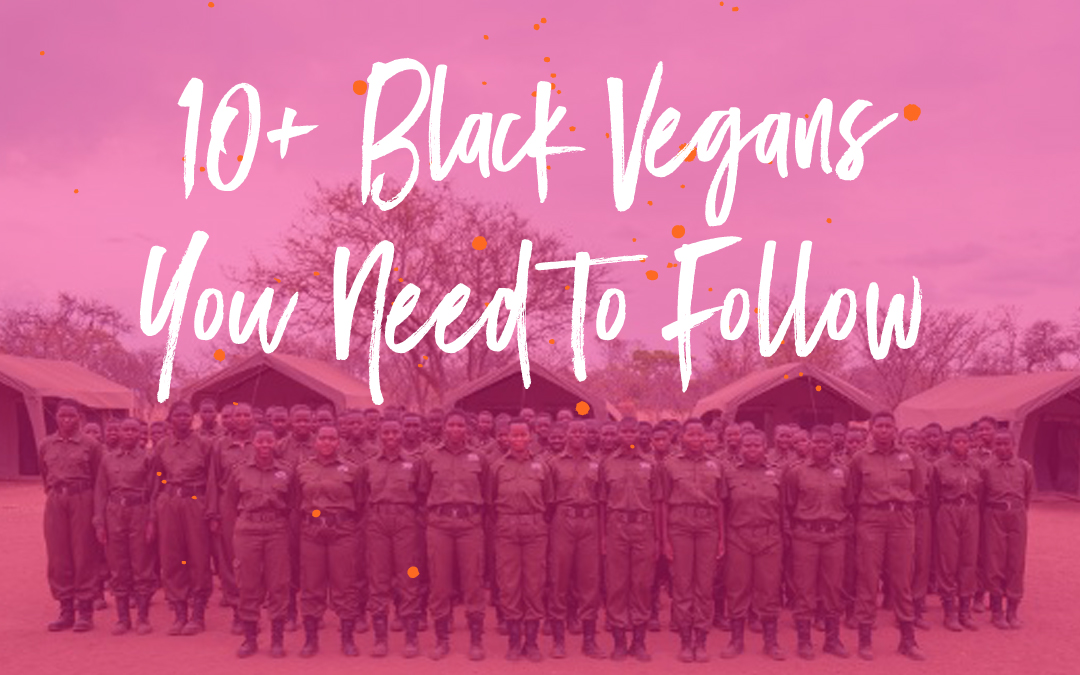 If it wasn’t for Black vegans, the plant-based movement wouldn’t have come as far as it has.

If I’d allocated my time properly, I’d have done a blog on why plant-based eating is so key to preventing future pandemics, but most of us know about that already, don’t we?

Despite the health crisis, we’re smack-dab in the middle of a global movement led by Black people to end systemic racism. What I did not realize in my research for this incredibly short list, however, is how Black people were a key part of leading the vegan movement.

If you’re eating plant-based (in any form), it is your duty to help combat racism—both in yourself and in your circles—if you want to continue forwarding the plant-based movement.

Although meat is a big part of African diets today, Krista White wrote in The Beet about how Black Americans traditionally ate plant-based diets out of necessity when they were enslaved in the Deep South. Produce, grains, and small portions of meat were their diets, because meat was considered a luxury item. Working with what they had, “frying, drying, pickling, and seasoning” became staple methods of African American food culture.

Zakiyaa Taylor wrote for OMD that plant-based diets remain relevant simply because of economics and people being unable to afford meat. The 1960s and ’70s revived an era of Black veganism, because of leaders like Artis Hinson and Dr. Sebi. Quoting Jennifer Jensen Wallach, Associate Professor of History, Black nationalist eaters avoided meat to demonstrate their rejection of the structure of White supremacy, which was built on domination and violence. By consuming food produced by and for Black people, radical food critics distanced themselves from American consumer capitalism.

So, eating was, and can still be, a form of protest.

It’s also a preferred diet of those who are Rastafarian, of the Nation of Islam, and belong to the African Hebrew Israelites of Jerusalem.

With even more knowledge and education available today on the benefits of eating plant-based, Black people worldwide continue to lead the movement as told in stories by The New York Times and The Guardian. In May, plant-based author Jonathan Safron Foer wrote an opinion piece for The New York Times about how the animal ag industry contributes to racial injustice; the majority of workers at meat plants are the working poor, who were also more likely to contract COVID-19. This was the first time I’d learned that this is another major reason for the meat industry contributing to social inequality, especially in North America.

For me, plant-based eating is probably the #1 way I express my desire to be a good person and leave the world a better place for my nieces and their descendents. Knowing the history of Black people and veganism makes me more proud that by choosing the food I eat, I am paying tribute to the Black ancestors who fought so hard for equal rights, and contributing to a better world for all.

As mentioned earlier, there are SO many notable Black people who deserve tribute, but I thought I’d highlight some of those I’ve recently learned about or engaged with.

I’d heard Angela Davis‘s name occasionally about every couple of years but didn’t know how important a figure she is—not just for civil rights, but for animal liberation. A professor emerita at the University of California, Santa Cruz, she remains a founding member of the Committees of Correspondence for Democracy and Socialism (CCDS). She’s authored over ten books on class, feminism, and the U.S. prison system, and is one of the most well-known female Black activists, philosophers, academics, and Marxist feminists (a very important distinction).

She doesn’t have a website, but you can see her professor page here and search on YouTube for clips of her inspiring talks, like the one above from the movie 13th.

Ava DuVernay hasn’t been in my consciousness until very recently, but after discovering she is the powerhouse director behind Selma, A Wrinkle in Time, 13th, and When They See Us, I’m now a HUGE fan! While not very outspoken as a vegan, DuVernay speaks miles through her films, having been the first Black female director to be nominated for an Academy Award for 13th, which I highly recommend along with When They See Us. She was also the first Black woman nominated for Best Director – Motion Picture for Selma. She’s very private about her personal life and future films, but we can expect more commendable projects from her, especially having Netflix to back them.

I’ve never used the term “speciesism,” but Omowale Adewale breaks it down so easily in this video.

Having previously battled high blood pressure and chronic bronchitis for years before becoming more knowledgeable about food and phytonutrients, “Wale” went vegan and became a certified plant-based nutritionist. He also founded Black VegFest in 2018, which is organized in Brooklyn, NY. A certified boxing coach, he’s also a two-time Kickboxing champion in the 155 lbs and 165 lbs division, a 165 lbs boxing champion, and a former athlete in bodybuilding and track and field.

Simply put, Stephanie Redcross-West is my vegan business hero! The founder and mastermind behind Vegan Mainstream, Stephanie is not just brilliant and kind, but she is a global community builder. I’d only been following her at the start of 2020 when starting to market my own services to vegan businesses, and I seem to have joined her community just in time (ask her about her Slack channel if you’re a vegan biz owner). A business coach with vast experience in both B2B and B2C businesses, she was kind to interview me as part of her Pivot! video and podcast series in May (see this post). She’s also a fantastic listener; my guess is that she’s an introvert like I am, and introverts make some of the world’s best leaders.

Persia White is an actor, recording artist, and producer, most known for her roles in The Vampire Diaries and Girlfriends, but I was a fan back in the day in the teen series Breaker High! Anyone else remember that show?? Persia has long been a vegan, and seems to keep her life pretty private as there aren’t many clips of her speaking on YouTube on diet or animal-related issues, but that doesn’t mean she isn’t still an influential activist. She co-produced Earthlings which was my “wake-up” documentary film, and was involved in the TV series “Whale Wars.” She’s also served on the board of a few animal activist organizations. She was most recently seen in the Will & Grace reboot, and I don’t doubt we’ll continue to see more of her or her good work.

Tracye McQuirter is an author, speaker, award-winning nutritionist and activist who has been vegan for over three decades. Her video above talks a bit about how the vegan diet ties in with the civil rights of Black people. When she was a student at Amherst College, global human rights activist and Civil Rights Movement icon Dick Gregory spoke to the Black Student Union about “the plate of Black America,” which inspired her to go vegetarian, and then vegan one year later. She’s also created a movement called 10,000 Black Vegan Women to encourage more Black women to go vegan, and she’s got some pretty amazing tools online to help anyone do just that.

Rapper Keith Tucker is the founder of Hip Hop is Green (HHIG), the first plant-based Hip Hop health and wellness organization in the world. Tucker came up with the original concept when he was interviewing vegan rappers on his Seattle radio show in the early 2010s. This introduction through music—and a culinary tour of vegandom at the Seattle VegFest—caused him to go vegan and further refine the idea that Hip Hop’s 9 Elements, beginning with the more familiar ones of DJ-ing, MC-ing, Graffiti Art, and Break Dancing, needed a 10th: Health and Wellness. HHIG is led by a team of artists and performers that use the power and influence of Hip Hop to speak to and provide powerful, life changing programs for under served, low income urban youth and their families. They’ve worked with several plant-based brands to introduce new communities to plant-based food and to date, have served over 7,000 plant-based meals to urban youth and families and established chapters all over the US and London.

Haile Thomas is a wellness and compassion activist, international speaker, author, and vegan lifestyle content creator. She spoke at her first TEDx talk right here in Vancouver BC in 2011 and has already done so much at her young age. She founded the non-profit HAPPY (Healthy, Active, Positive, Purposeful, Youth), which she founded at 12 years old, and at 16, she was the youngest graduate from the Institute for Integrative Nutrition as a Certified Integrative Nutrition Health Coach. At 19, she’s just getting started and I have no doubt she’ll continue to influence millions about the benefits of a vegan lifestyle in a way that’s fun and accessible.

Like many of the folks above, Los Angeles-based LaRayia Gaston is multi-talented. On top of being an actor and producer, influencer, speaker, and activist, she’s the Founder and ED of non-profit organization Lunch On Me, which feeds organic food and offers holistic healing to the homeless, and CEO/Designer of Apule Town, a lifestyle brand and styling house.

I had to give a shout-out to a local, and though there are so many vegan Black leaders in Vancouver, Asha Wheeldon of Kula Kitchen, an Afrocentric food company, is my pick. She calls herself an “activist through food” and connecting people, and people have raved about her cuisine, myself included! Recently, she helped to compile shareable lists of Vancouver-based Black-owned businesses and their Instagram accounts, and will be a featured speaker at Flavours of Hope’s Food & Race Conversation Series TOMORROW, July 7 at 1:30pm PST.

While these Black vegans didn’t make it to my Top 10, they’re pretty well-followed.

And, look out for: Akashinga

I personally can’t wait for the release of the short documentary (produced by James Cameron) on Akashinga, a vegan, female team of rangers in Zimbabwe, drawn from the abused and marginalized who are revolutionizing the way animals are protected and communities are empowered. (The photo above is credited to Kim Butts)

Finally, I encourage you to take a look at this article on 9 ways vegans can better support Black people, and Julia Murray’s list of 15 inspiring Black vegans you need to follow.