What bras and brussels sprouts taught me about my health 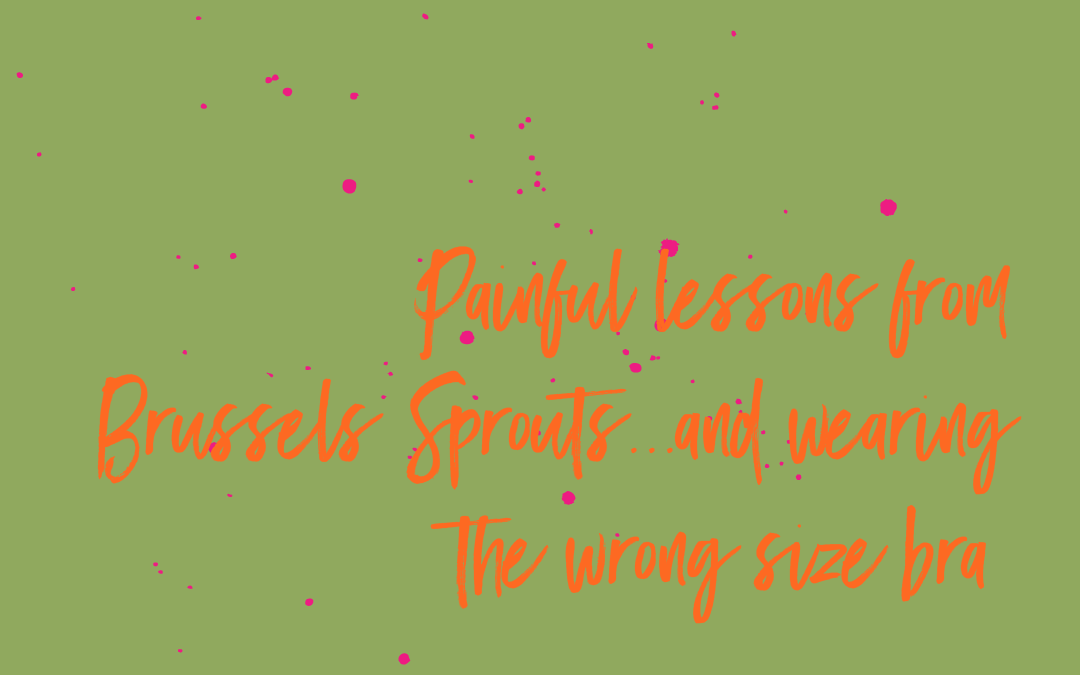 **Trigger warning**: This blog is a recount about food and digestive problems.

The short version of the story:

The detailed version of the story:

I’ve been experiencing this anomalous abdominal pain for just about a decade now, so over the years I’ve learned to treat the symptoms right away with this graphic on my phone, which I’ve almost memorized: 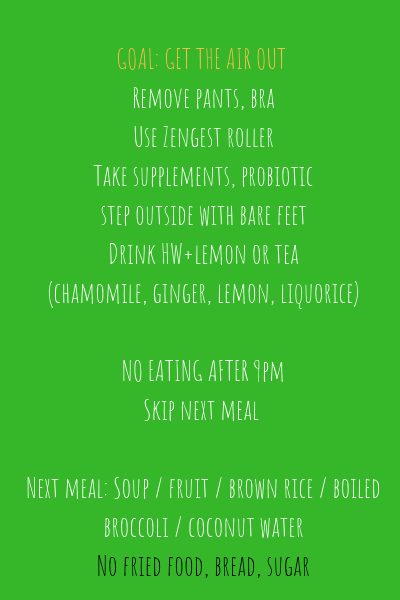 As I write this I’m on Day 24 of 60 in a “chakra unblocking” practice, inspired by a local influencer who says that our manifestation abilities (residing in the seventh chakra outside of the body) are a result of how unblocked and in flow our chakras (energy centres) are. Since I’ve been on a (unsuccessful thus far) gig hunt since August, I figure there’s no harm in doing a two-month test to see if this practice works.

Since I started, I have been visualizing my desires more, doing conscious, deep breathing before daily meditation which I used to, working on “giving away” something each day so that I can practice receiving in gratitude (along with daily journalling), becoming more aware of my words and thoughts, and connecting more with my spiritual guides and Angel Ariel, who I was instructed at satsang a few months back to call in “all the time.”

By far the most difficult chakra I’ve found to “unblock” is my solar plexus, which could get easily blocked by consuming food I’m not supposed to eat. It can also be blocked by procrastinating or a lack of decision-making, confidence, motivation or energy, not being authentic, or being overwhelmed, burnt out, or out of balance. Until making the lunch dish on Monday, I think I have been doing pretty good in terms of the emotional/energy piece. I have been feeling more in balance and “unblocked” than ever since starting this practice.

However, if I was listening to my body more, I would have probably clued in earlier that being bloated after lunch on Thursday was not a good sign. I should not have put on that bra, and I should not have gone to the vegan Meetup.

But I did both things.

I thought I was being smart by not dressing until the afternoon, but it didn’t matter because that was right around the time I was already so full from lunch. I knew I wasn’t going to eat a snack to save my appetite for the Meetup, but when I got there, I still wasn’t hungry.

I ate a full plate of 3 types of salads, two types of sandwiches, two types of flatbread, and two desserts, between about 6:45 to 7:15pm. There were seconds available and I was even going to take out some leftovers since Kind Cafe is a zero waste restaurant, but I didn’t need to. In terms of sensitivities, there were likely dressings, spreads, and cheez that were cashew or almond-based which is a no-no for me. Everything else I couldn’t tell whether it was legit or not, but I usually don’t nitpick at restaurants, and eating sensitive foods once in a blue moon usually doesn’t do anything to me.

What’s funny is my table mate (likely about 10-15 years younger than I am) said, “I eat so much I get stomach pains!” and I kind of wanted to tell her my entire food journey. I might hunt her down and forward this link after I publish it.

By the way, Kind Cafe is amazing and they hold zero responsibility for my health condition!

Also, since the recall on ranitidine, I had to throw away my Zantac, which I would have taken on an occasion like this BEFORE eating the meal. It’s a lifesaver. But I didn’t have a chance to replace it before then.

I arrived home at about 8pm and immediately got undressed (I had already loosened my jeans button while walking to the bus stop). I applied my heat pack and used DoTerra’s Zengest oil blend on my stomach — which I had been doing all week as well.

At about 9pm I felt completely inflated and the food definitely wasn’t moving downward. I call this the “pregnant” phase because my belly just gets so huge. At this point I considered taking probiotics/supplements and dancing to K-Pop which helps get the solar plexus energy moving, but it was really past the point of return in this case. I regretted going to the Meetup, and tried another hour with my heat pack as I watched Dragon’s Den.

10:30pm I was in bed upright journalling, finishing The Fear Cure (which is oddly about health as well as emotional fear), and sipping hot water with lemon and apple cider vinegar, which is usually the best reliever of all.

11pm is usually the time to hit the sack, but it just wasn’t possible so I tried two different meditations for digestion, both of which were basically instructing me to breathe deeply…so that did nothing.

I started dozing at about 11:45pm. Between then and 12:30am I started feeling better, so I lay down hoping I could beat the pain. But this sometimes makes things worse, as the stomach acid flows upward. So I sat back up again just before 1am, which is when Leo finally came home from a late night. He saw me sitting upright and immediately said, “Oh no.” He knows how this game is played.

We turn the light off and I’m sitting upright for the next half hour, in the most intense pain I’ve ever felt, probably slightly worse than the time I was in pain for seven hours after throwing up. I remember my Naturopath asking me, “And you didn’t consider going to the hospital?”

But no, I’m not going to go to the hospital. It’s me and the pain fighting tonight. So I start to pray to Angel Ariel. I’m not sure if she helps with human health and healing, but I know a bit more about her, so I keep repeating this over and over:

Angel Ariel, angel of courage and eliminating fear,
leader of the animal kingdom,
angel of all plant life,
angel of the hearth and fire,

I must have repeated it almost a hundred times until it became a mantra. Then as I was praying, I started hearing a voice that said, if you want to get rid of the pain, you have to get rid of your fear.

And I started thinking about my childhood trauma from which most of my fear stems. Fuuuuuck.

30 minutes later, it became clear that it was time to relieve the pain physically. So I went to the washroom and estimate about four cups of dinner went into the toilet, with about 1/4 cup remaining in my stomach, unable to leave.

I was wide awake at around 2am, and thought about doing Reiki and contacting an intuitive healer and massage therapist who I was IG messaging about my issues last year. I couldn’t find her on IG so I sent her a Facebook message to ask if she could give me a session. I figured if she got back to me she could help with unblocking my solar plexus on a longer term basis, and if she didn’t, I’d go do a breath session with Ela Rezmer Bach anyway (who I once did Transformational Breath work with about six years ago — it was the most spiritual experience I’ve ever had).

I made a couple notes on my phone about Reiki, going to the mall to get new bras and Pepcid, and booking my breath session, then went to sleep at 2:30am.

My alarm went off just before 7am and I slept for another hour after that, choosing to skip my morning run. I would have run on Saturday had it not been pouring rain, so I did yoga instead.

After a shower and morning meditation, I post this to my IG feed at about 9am while drinking my morning tonic of water and slippery elm (bark) powder:

*Health/eating trigger warning* Yesterday was a doozy. I think I am developing a sensitivity to Brussels sprouts (which I love but only eat in Fall/Winter) cause it’s been causing me bloating since Monday. I knew I shouldn’t have worn that bra that doesn’t fit and shouldn’t have gone to that #vegan Meetup even though I was SO looking forward to eating there. The food wouldn’t break down (usual remedies were not going to work this time) and I was up at 1 still in pain, the most intense pain I’ve ever felt that I started praying to Ariel (I don’t know who the health angel is). We had a bit of a convo about the repressed #fear I still need to get over. 130 the food was purged and I spent another hour thinking of how to keep this from happening again. I messaged an intuitive healer at about 2am, am going to the mall today to get new bras and Pepcid, will write a blog about the whole ordeal, and book a breath session for next week. How’s your Friday going? #foodsensitivities #intuition #breakdown #pain #ariel #angelariel #angels #prayer #purging #selfdiagnosis #selfcare #solarplexus #solarplexushealing #chakraunblocking #fridays @journalsbysandra

I skip breakfast, which is the rule after a night of throwing up.

I managed to get some good work done before lunch: avo toast and carefully plucked yams to finally test if I’m really sensitive to brussels sprouts.

At 2:30pm I left for the mall to go get new bras and Pepcid. There was only ONE package left at Rexall!

I decided not to get a Reiki session given my investment in new underwear and soon-to-be-done breathwork. I’ve never done Reiki, but I believe (and have heard) that it provides temporary relief, and can’t permanently eliminate deep-seated trauma. I also had been to the RMT last weekend.

Oh, as for my convo with Ariel about that fear: I figure that could be dealt with through hypnotherapy, but that’s going to be a long term goal, and I have to deal with the immediate solar plexus issues at hand so I can continue my chakra unblocking practice.

I never heard back from the healer about a session, so I know it wasn’t meant to be, at least not now.

I went to Uniqlo as I heard they have wireless bras, and I’m SO done with the wire. These bras are freaking amazing and only $30 each. However, immediately after purchasing (final sale), I noticed I had accidentally grabbed another bra that was the same style but in nylon-spandex blend (top) instead of cotton-spandex. And I was trying so hard to be eco!

(Yes, I know knix also has wireless but you can compare the pricing to Uniqlo.) 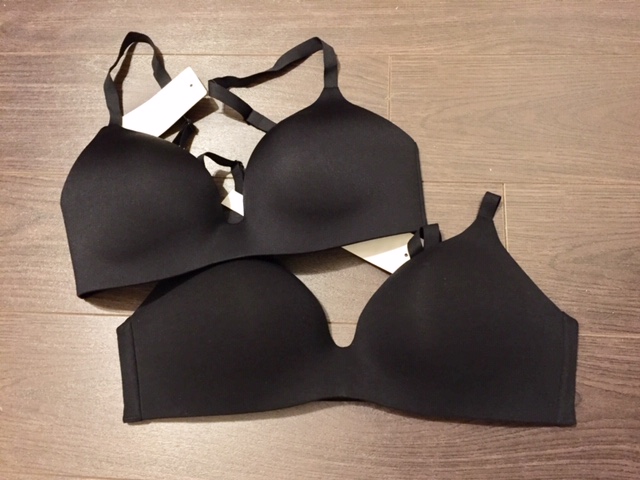 Goddamn those huge department-style stores…there’s that overwhelm in the solar plexus again!

It’s 6:30pm and I’ve finished writing this blog. No pain, so I know brussels sprouts is now forever going on my Do Not Touch list.

And I’m okay with that because I get closer to being pain-free.

Ladies, if you’re reading this and haven’t gotten your bra size checked within the year, do yourself a favour and get checked. It might also save you some pain.

In my perfect world, we would not need to wear bras, but we are far from living in a society that could tolerate the sight of nipples and breasts of various sizes.

Wishing you freedom from your pain: Physically, emotionally, mentally, or spiritually. We’re all on this journey together.