The truth about plastic: How bad is it? 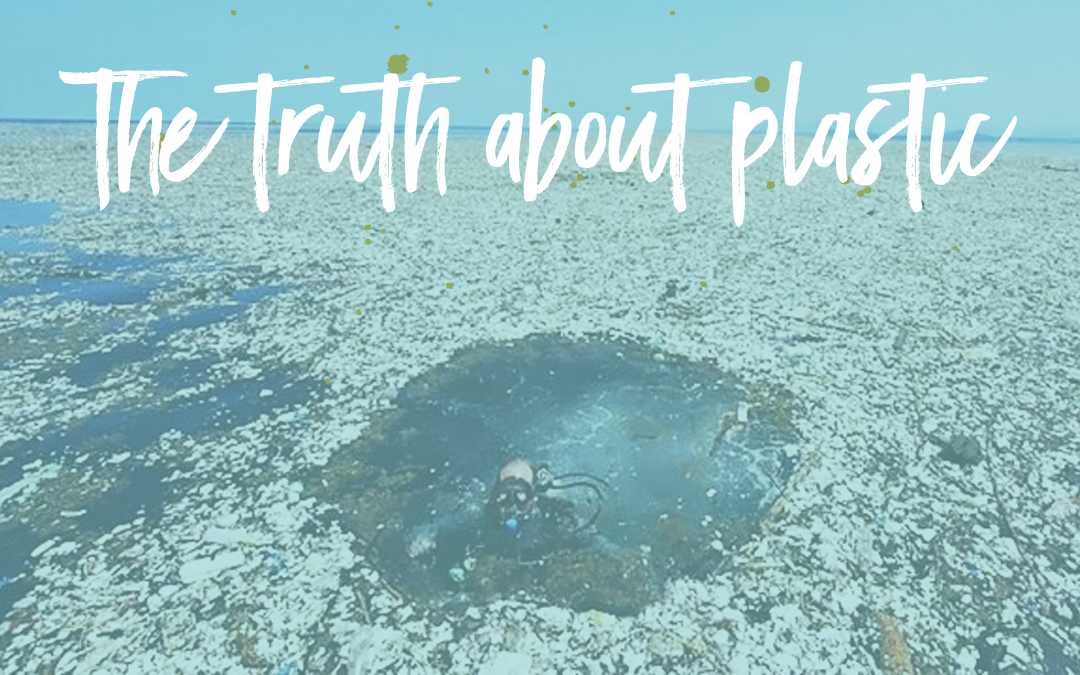 Or, how to go a little more plastic-free in Plastic-Free July

My timing on this blog is impeccable! 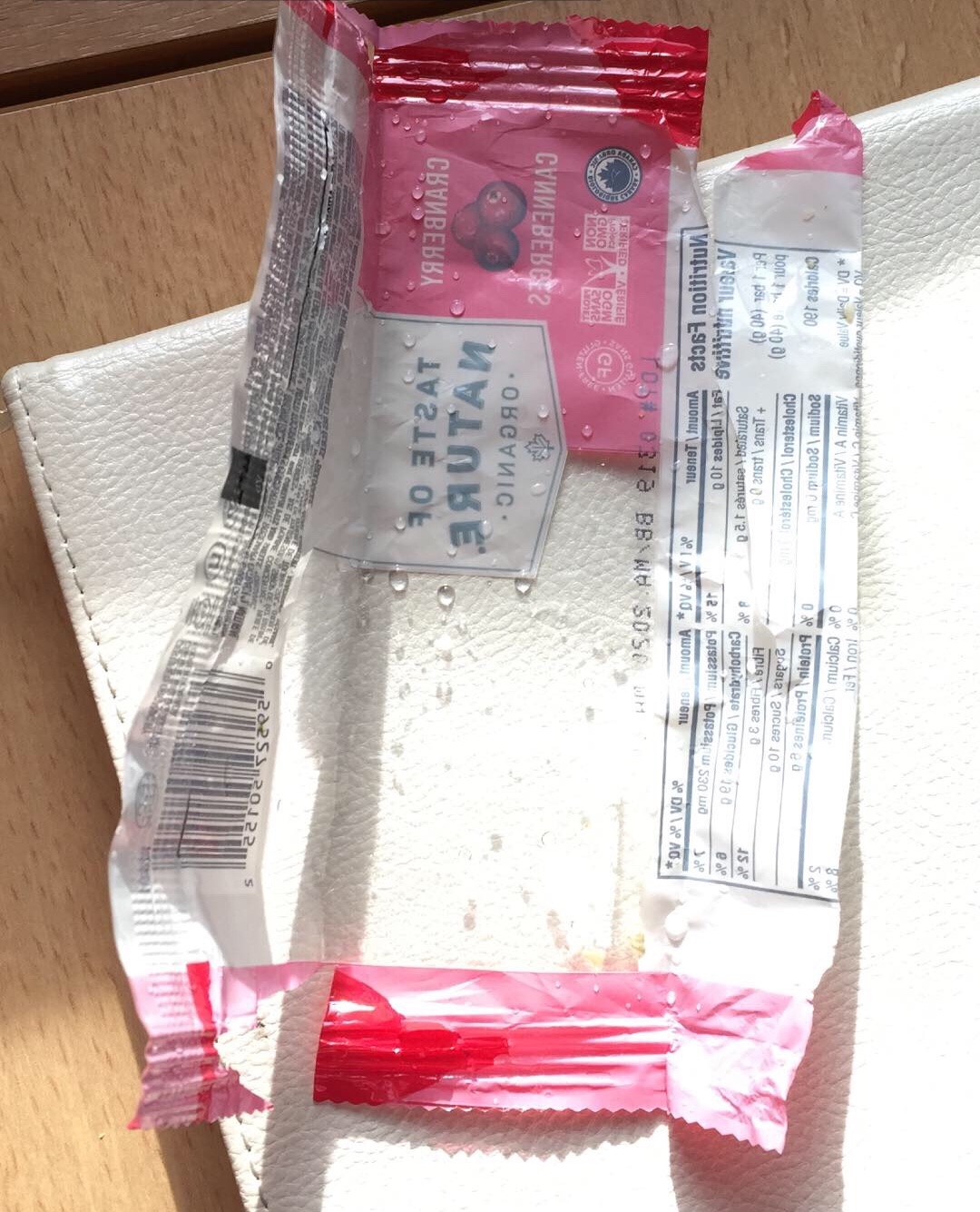 Two speakers at the recent Sustainability Leadership Congress in June of this year really had an affect on me. The first was Natalie Forstbauer who inspired my blog on glyphosate, and the other was Peter Van Stolk, CEO of SPUD.ca.

I felt bad for the teen who naively but justly asked Peter how he was making sure that all of the plastic packaging that SPUD.ca is committed to recycling, was actually properly getting recycled at the facility they send it to in New Jersey. Following that question, he went on a rant about how the problem isn’t recycling, but the lack of it.

He estimated that 90% of recyclable items were still going to landfills.

That evening, instead of throwing the wrapper of a small nut bar in the trash as I might have done, I washed it and put it in the bag that I use to collect large soft plastics. After all, every bit counts given the amount of microplastic in the ocean. Before we start getting dark, let’s recap the basics of recycling. My friend recently told me she wanted to recycle more, but thought she couldn’t put anything without a code on it in her bin. So I thought we all needed a refresher.

A primer on recycling in BC

Every municipality and type of home is going to be different but for the City of Vancouver, Recycle BC is responsible for collection, and partners with Smithrite Disposal to collect curbside for single family homes and duplexes. Here’s a quick reference image: 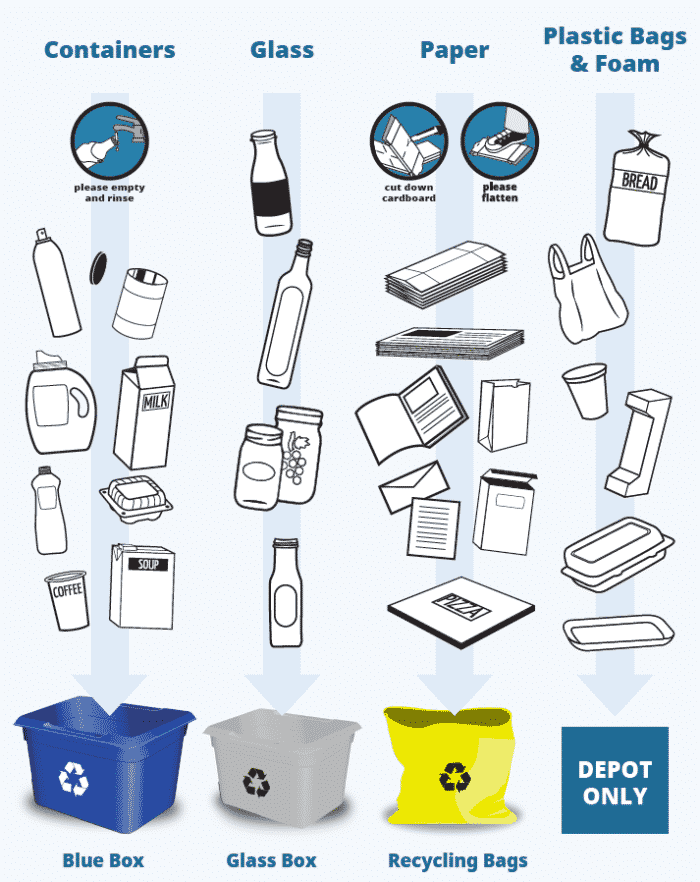 Unlike other places, we don’t need to check for symbols on packages to see if they’re recyclable. If you’re not sure even after looking at this image, go to the guide online. Here’s a list of items that can be dropped off at a recycling depot (my fav is London Drugs – but also visit their website to know what they can recycle.)

Make sure you wash and dry the plastic before you take it over. The only plastic that isn’t recyclable is the crinkly plastic in cookie packages like Oreos. Gah, why?!

Did you know: You can recycle used mascara wands and donate them to this organization and wildlife centres?

That time I got duped by grocery produce plastic

I’ve been shopping at Famous Foods forever, and right around the time hubs moved in with me six years ago, we noticed these Degradable bags come in for produce. I thought they said “Biodegradable.” I thought: “Great! We can just throw these in the organics bin with our food waste.” Turns out there were more people like me who thought the same thing, as Mayor Robertson had to remind people NOT to put plastics in their green bins like we were doing. 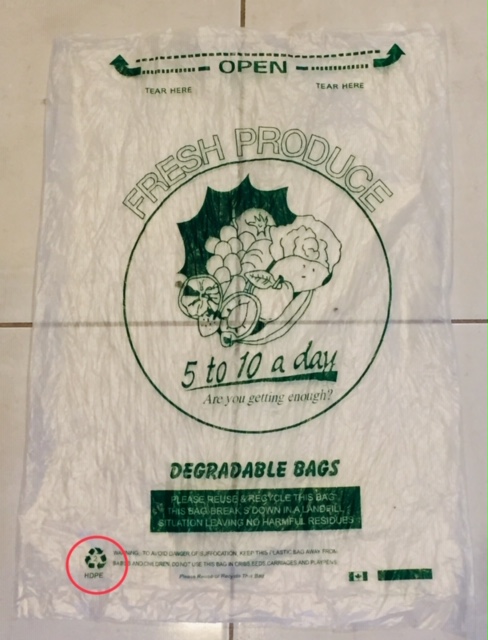 Degradable, all right. That little HDPE 2 sign looks like it’s pretty eco, right? Well, HDPE means is that it’s made of high-density polyethylene, and while it can be recycled, it’s definitely NOT biodegradable like food is.

Another young teen at the conference (she could not have been more than 15) asked the water panel what could be done to prevent turtles from being strangled by plastic.

Recycling is the absolute basic thing we can do, but I thought there had to be more.

Just how bad is the (micro)plastic issue, really?

The Center for Disease Control and Prevention (CDC) reported that over 92% of people who were tested for chemicals had detectable levels of Bisphenol-A (BPA) and other plastic chemicals in their bodies, including newborn babies.

We’ll talk more about health effects later, but I’m so f*cking sick of hearing about people getting cancer, while we do nothing to prevent ingesting the chemicals that actually cause it. Aren’t you? We might think that plastic’s outside of ourselves, but it’s just the opposite.

Let’s admit it: plastic in the oceans creates some of the most powerful environmental and geographic photos. 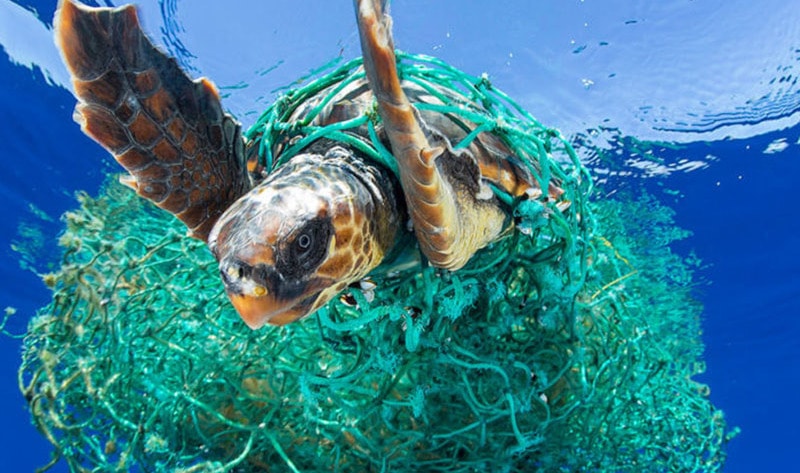 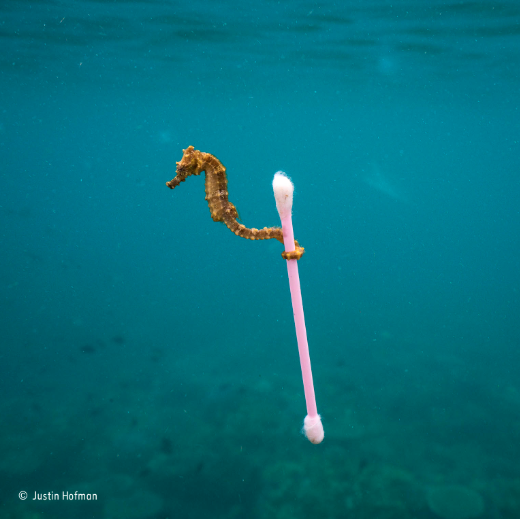 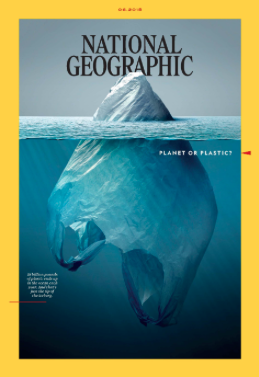 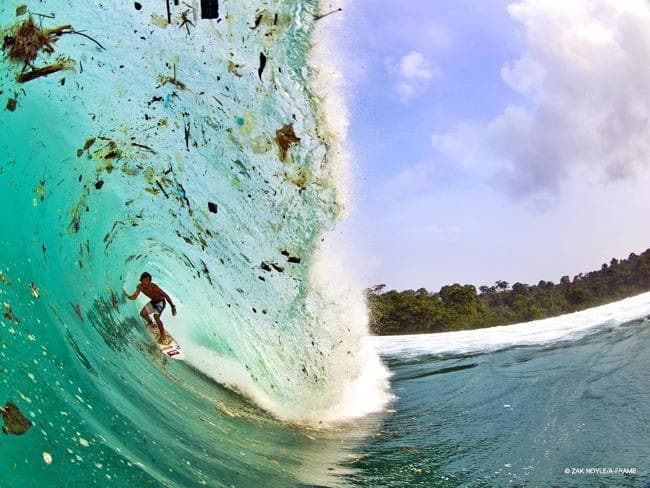 At first it was beer can rings, then water bottles, then plastic straws and bags, fishing nets (Healthy Seas; GGGI), and now they’re saying cigarette butts (which actually contain plastic) are the biggest ocean contaminant, with 4.5 trillion littered annually.

Can we just agree that ALL PLASTIC WASTE is just not good?

Wait – can we back up and see what this “Great” Pacific Garbage Patch looks like?

I don’t think anyone’s going to disagree with me that we could stand to put less plastic in the oceans, which is our main source of water and survival. So I’d like to move onto other ways plastic affects us that we may not be conscious of.

In the beauty industry, plastic has a nicer name: “Microbeads.” Sounds like a piece of jewellery you want to put around your neck, right?

I can’t believe glitter masks were a thing this year. I’m not gonna lie, I had a good run with face/neck glitter in my 20’s, but now I can’t stand glitter and confetti. You could at least recycle confetti, but damn, is that shit hard to clean up. 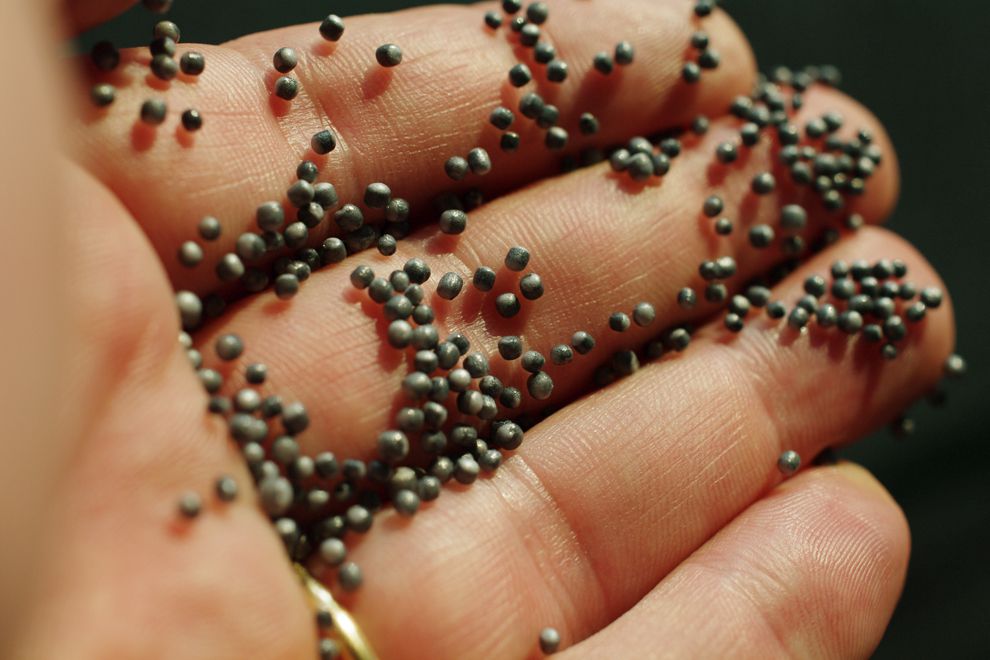 Packaging and other plastic-ridden items

The best packaging is none at all, but here are some common items containing plastic chemicals, and some of their potential health risks:

These items contain one or more of the following chemicals:

What we can do to avoid plastic and help the cleanup

It’s a long list, but after all, recycling isn’t enough – depending on the type, plastic may only be recycled 2-9 times before it becomes microplastic (glass and metal can be recycled indefinitely), so the best thing we can do is avoid using it in the first place.

Use non-plastic products and packaging, or re-use.

At the grocery store: 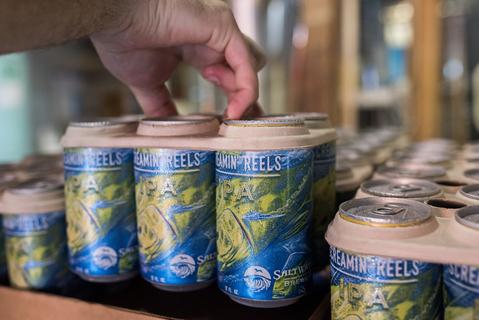 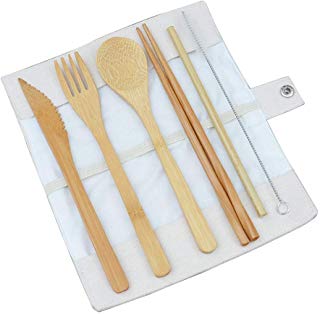 Buy natural fibres, and from companies that recycle plastic into clothing.

I’m by no means suggesting you go on a spree soon as you finish reading this blog. If you happen to be shopping new for some of these items anyway, you may as well get them recycled and made by Canadian entrepreneurs:

Sit on your ass and watch something

Search and watch one of the many documentaries on plastic waste to educate yourself. Below is the trailer for A Plastic Ocean, which I’ve yet to see. I can’t believe people are growing food on top of garbage!

BBC just released a series, War on Plastic with Hugh and Anita. It’s not available in Canada yet.

Hell, if they paid a good wage for citizens to clean up streets and beaches, I’d be out there like Afroz Shah keeping Vancouver clean. Aside from taking part in a cleanup yourself (see Great Canadian Shoreline Cleanup and Plastic Oceans Canada in Vancouver), consider supporting:

Reduce or eliminate your seafood intake.

Reducing or removing seafood from your diet minimizes all the fishing gear that gets discarded into the ocean, takes away just one source of food in which there is plastic, and reduces the need for farmed fish that now dominate the industry. Japan withdrew from the International Whaling Commission (IWC) and lifted their ban on whale hunting at the end of last year just because it’s “a part of Japanese culture and tradition”, despite the fact that the demand for whale meat has declined drastically. Because of stupid sh*t like this, we could stand to reduce the demand for consuming all types of seafood.

Cigarettes give you lung cancer, and clearly we aren’t discarding them properly. HMU in about two years, hopefully I’ll be a hypnotherapist who can help you quit if you still need help, haha. No, seriously though.

Is there anything else you or your family/friends do to deal with the global plastic problem that I haven’t covered here? Please share with us in the comments.