The truth about glyphosate 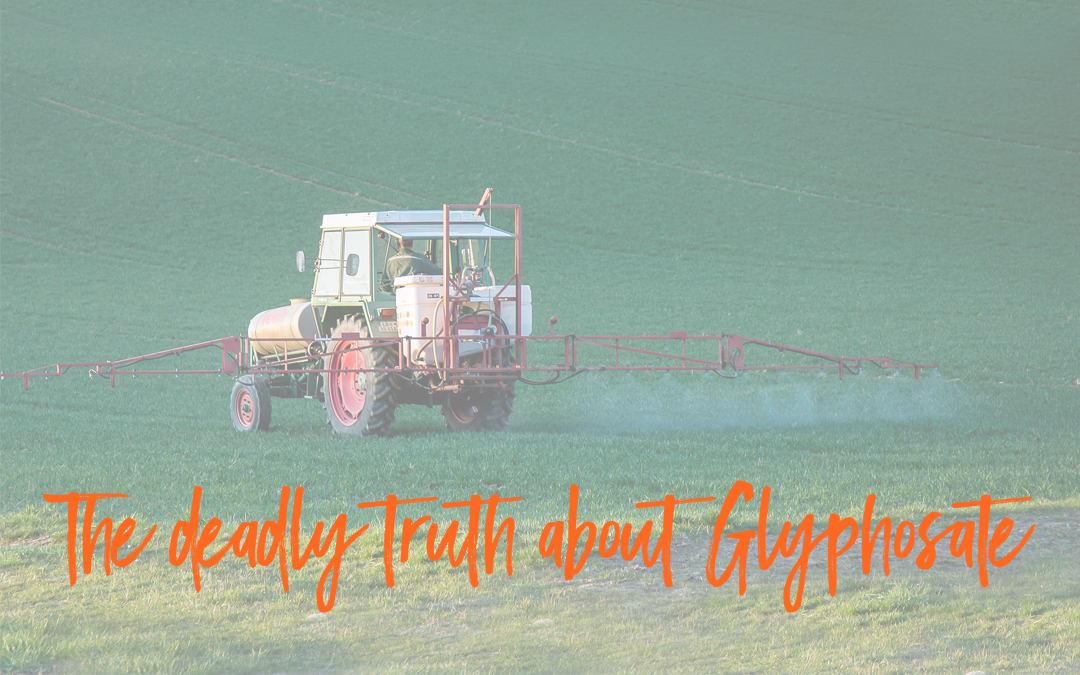 When I was a child and went to church on Sunday, my dad was the only badass in our parish to read during Mass. His choice reads were not the Holy Bible, but “The Plain Truth” pamphlets that debunked common Christian beliefs or traditions, like why Jesus could not have been born in Winter. They were laughable but now that I’m an adult, I wonder how much truth there was to that information.

I think of those pamphlets when I learn about glyphosate. The general public has been told that it’s perfectly okay to consume them in our food, even though we have no f*cking idea what the consequences are — or are going to be in the future.

But actually, we do.

I’ve seen a few agricultural documentaries now, but the one that comes to mind on genetically-modified organisms (GMOs) is GMO OMG. The standout scene for me was the one in which a mother stopped feeding foods containing GMOs to her autistic toddler, and his symptoms started to go away.

Let’s recap: In the USA, 80% of all processed foods contain GMOs, as do their meat and dairy.

Four years after watching GMO OMG and following Canadian teen activist and advocate for GMO labelling, Rachel Parent, I have a coffee chat with a colleague who tells me that glyphosate is being used in Canada, and she’s about to campaign against the government for the renewal of their contract.

I forgot about that convo until June 2019, when speaker, author, farmer and doc filmmaker Natalie Forstbauer asked a panel of food & water experts about the use of glyphosate at the Intengine Sustainability Congress. I don’t think they had a good answer for her, but it inspired me to do more digging.

Two years, ago, Modified came out. I haven’t seen it, but thanks to the research for this blog, I’m starting to discover how bad the coverup is in Canada.

GMOs have the potential to be linked to allergic reactions, resistance to antibiotics, cancer, loss of nutrition, and other potential effects on organ development, metabolism, and immune function.

Because of these herbicide-resistant crops, companies like Monsanto have created products like Roundup containing glyphosate, which has been linked to:

…And we wonder why the medical industry is so huge.

My colleague was about a year too late. In 2017, Health Canada decided to continue the registration of glyphosate in Canada for potentially another 15 years.

Following this decision, there was a study and subsequent What’s in your lunch? campaign in 2018 by Environmental Defence, that tested and published the glyphosate level of 18 processed Canadian food products. 80% of the food products that were tested contained glyphosate.

The top six (in descending order of glypho content) included:

I was floored. Never did I think that the same sh*t that’s in Roundup was alive and active in the Canadian food system.

Health Canada fought back with a statement, and the tested food companies released their own defensive statements. Health Canada said:

“No pesticide regulatory authority in the world currently considers glyphosate to be a cancer risk to humans at the levels at which humans are currently exposed.”

In other words: “There’s no proof glypho causes cancer in humans.”

In an article by The Star, American lawyers Michael Baum and Brent Wisner said Health Canada was “dead wrong.” They’re part of the law team that won a multimillion-dollar verdict against Bayer AG in 2018 on behalf of a former groundskeeper, who believed his terminal cancer was a result of years of glyphosate exposure.

In 2015, the World Health Organization’s International Agency for Research on Cancer (IARC) reported glypho was likely to be carcinogenic to humans, and concluded that there was “strong” evidence for genotoxicity. They were, of course, attacked by politicians who were likely pressured by corporate execs.

Nature’s Path Foods came out with their own campaign for certified organic food, which, by law, cannot contain pesticides such as glyphosate.

To recap: Glyphosates may still appear in organic food because of the proximity to conventional farms, but conventional produce has 100x more glyphosate! And trust me from my recent trip to the Farmer’s Market: You can taste the difference in the quality of organic strawberries!

Not everyone’s as amazing a citizen as she is, but this is the kind of stuff we have to do to protect ourselves, our communities, and fight back against the use of glypho, especially in residential neighbourhoods–but this is what’s come to. I live on Main Street and the smog is really the worst thing I complain about. I’d be up in arms if I knew I was breathing glypho.

I learned while researching for this blog that eight provinces have restricted pesticide use OTHER than as a weedkiller, including glypho. This includes other municipalities in B.C. and my very own City of Vancouver, thanks to the work of persistent activists.

But as long as it’s still being used on crops, it’s still getting into our food, and that ain’t right.

What you can do to avoid glyphosate consumption

Fun fact: Beyond Meat is Non-GMO Project certified, while the Impossible Burger is made of soy derived from GMOs.

What else is being done in the war against glypho

B.C.’s Ministry of Forests uses glypho to kill deciduous and fire-resistant trees because they compete with marketable coniferous trees, contributing to our now annual “fire season.” Last month, the Regional District of Central Kootenay announced that they’ve voted to take a resolution to the annual Union of B.C. Municipalities (UBCM) conference in September, and if it passes a vote there, the UBCM will lobby the government for a glyphosate study and perhaps a ban. (BC Local News)

The province of New Brunswick announced a 30% reduction of glypho spraying, with a promise of more regulations in the future.

In 2017, Western Grain Elevator Association (WGEA), which consists of Western Canada’s major grain companies, identified five pesticides they didn’t want used on the crops they buy, and created a Keep It Clean! campaign to educate farmers in Western Canada. This is the first time I’ve seen a business collective educate another group of professionals. It’s cute but also intimidating…so I hope those farmers are paying attention.

In May, a group of brands (including Amy’s Kitchen, Ben & Jerry’s, Clif Bar, KIND Snacks, Nature’s Path Foods, and One Degree Organic Foods) and members of the public marched to the offices of the US Environmental Protection Agency (EPA) in Washington, DC to deliver a petition, aiming to end the pre-harvest spraying of glypho-based herbicides on crops. This followed another petition submitted by the Environmental Working Group (EWG) along with eight major food companies in the fall of 2018.

That same year, Moms Across America along with Organic Consumers Association, Institute for Responsible Technology and Thinking, and Moms Revolution (millions of supporters combined) announced a campaign for governors to ban glypho in all 50 US states.

Just last week, Austria became the first country in the European Union to ban glypho. A number of countries have already voted against relicensing it. I’m hopeful that soon we’ll see a European Union-wide ban.

A list of places where glypho is currently banned can be found on this site.

Finally, a number of other third-party certifications have popped up. While Certified Organic is still the best way to go, I suppose it’s not a bad thing to see some of these other seals instead of nothing, or a false claim on a package.

Do you know what else can be or is being done in your area to fight glyphosates or other harmful chemicals in our ecosystem? Let us know in the comments below!