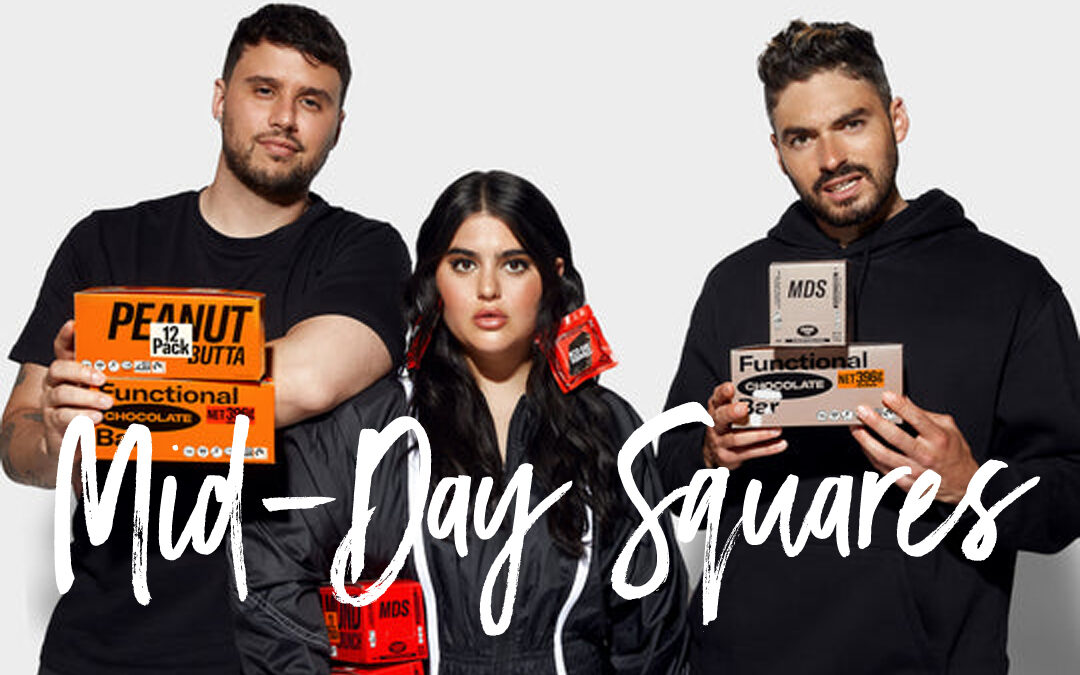 While Montreal-HQd Mid-Day Squares (MDS) isn’t an official contributor to the book, I was fortunate to get approval to use a few quotes Co-Founder Lezlie Karls said after the Q&A portion of an interview VEG Networking Canada did with her in 2021.

At that point, I hadn’t even tried Mid-Day Squares’ products but I was already a fan of their online content. WHY? The 24/7 exposure of their lives in and outside of the company, which is carefully crafted into a chaos/control model that adds uncertainty and excitement to their digital content.

Sales promos aren’t MDS’s major marketing tactic (the product speaks for itself!), but I talked about how they were the only company I’ve seen in a while to offer CASH prizes. I said: “What I don’t see companies do anymore is offer cold hard cash. But I’ve seen plant-based chocolate brand Mid-Day Squares offer cash in a few contests—and I enter every single one.”

In addition to getting in traditional news media (controversy will do that), MDS also acts like its own media empire. They recently started up their Mid-Day Squares UNCENSORED! podcast after a hiatus, with an entire episode dedicated to why they were gone. for that time. I wrote: “The company produces a podcast called UNCENSORED!, and documents everything, from expanding distribution to raising money, experiencing shipping backlogs, mental health, challenges in developing new products, and changing its packaging after facing copyright infringement claims from bigger corporations. I became a fan of the brand before I had even tried the products, and when I did I became a superfan.”

I also asked Lezlie about how the company developed its content team. She said three months into the business, their second hire on the operations side—even before hiring a sales representative—was a videographer. People thought it was the wrong move. But when her brother Jake Karls joined the business, he said it needed to show everything. Its media department comprises six people, including Lezlie. She said:

I felt uncomfortable putting myself and my life out there. And, I had to get okay with the uncomfortable because that was what we committed to. We brought on our first videographer, and that was the best decision we ever made. Because we have content and the story from day one, that’s what built our community. Without the storytelling, Mid-Day Squares is not what it is—without showing everybody what it takes to build this chocolate bar company and the good, the bad, the ugly, you know, it’s just not. We need it to have the differentiator and trailblaze when it comes to marketing.

Mid-Day Squares is one of the most honest brands I’ve seen share its story online, and I believe it’s this honesty that’s attracted loyal followers who are eager to learn about its journey each step of the way.

In February 2021, the company produced a video that parodied recording artist DJ Khaled’s “Hold You Down.” I was curious to know how much Mid-Day Squares spent on the set and costumes for the video. “The DJ Khaled video cost five thousand dollars. We do everything tight at Mid-Day Squares. I always say, you don’t need budget to make something great,” said Lezlie. That number might sound like a lot to you but compared to the production budget for a typical music video, it isn’t much. Here’s that video that’s still one of my favs:

Aside from doing high-production videos, Mid-Day Squares shoots many hours of footage weekly, which then get edited down to shorter, more digestible videos for social media. Any company owner or marketer can see within 5 minutes of watching MDS’s footage how much work gets put into their content, so whenever you think you’re not shooting enough video…have a look at their accounts and get motivated to do more!

Because their online community is such a big part of their strategy, MDS has a second Instagram account (@mdscrewlove) and a Facebook group dedicated specifically to its customers. (PS: I’ve now tried all their products, and they’re amaze-balls.)

The Vegan Marketing Success Stories ebook is available to purchase on Lulu.com here. The print and audio versions launch November 1 on Lulu’s bookstore and Audible. It will be available on other online sites within 8 weeks.