Diseases and Pandemics We Got From Animals 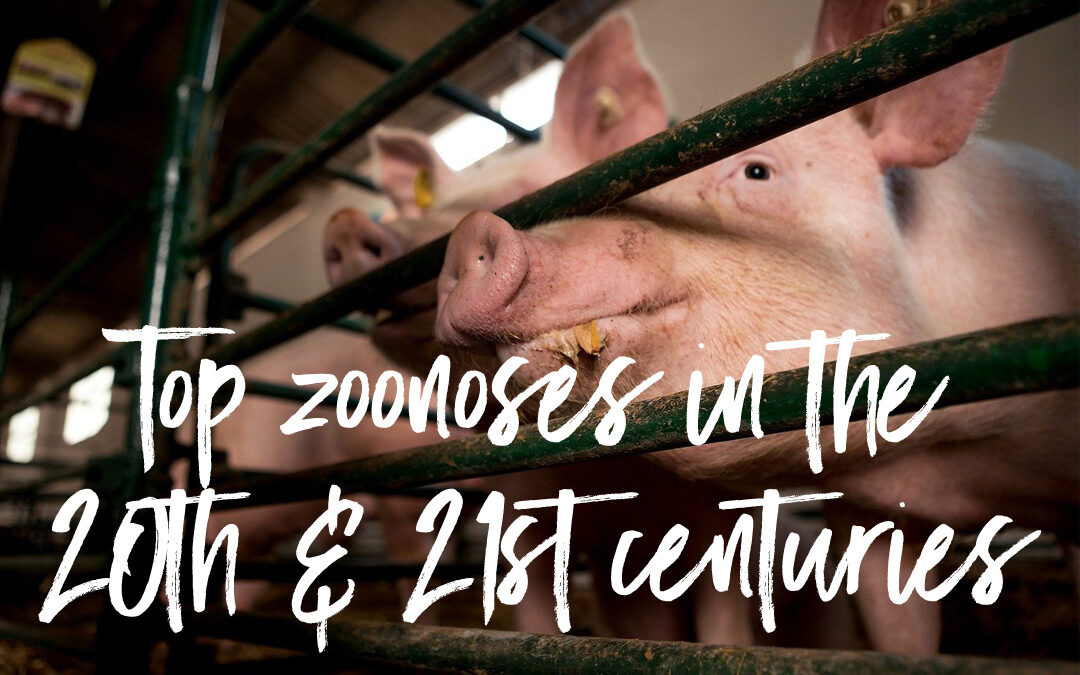 We’ve gotten a lot of our diseases from animals.

And since this topic wasn’t in my blog post on the major reasons I’m vegan, it gets its own!

It’s now past two years since the COVID-19 pandemic began. We haven’t yet confirmed its original source, but it most certainly is interaction with animals. Even though a study across six western countries found that plant-based or pescatarian (seafood) diets were associated with lower odds of moderate-to-severe COVID-19 and more people sign up for Veganuary each year, not enough people seem to be convinced that eliminating our meat intake could not only solve some of our climate change problems but also prevent the next pandemic. So I’m here to tell you that the COVID-19 pandemic happened, it’s still happening, and another may very well happen again if nothing changes.

According to the World Health Organization (WHO), a zoonosis (also called zoonotic disease) is a disease or infection that is transmissible from non-human animals to humans. Comprising a large percentage of new and existing human diseases, there are over 200 known types of zoonoses, some of which are preventable through vaccination and other methods. Rabies is one example of a treatable disease. Zoonotic pathogens can spread to humans through any contact point with domestic, agricultural or wild animals. High risk situations include:

Alright, let’s go on this tour of some of the most impactful zoonoses in human history.

Derived from: Unknown, but believed to have genes of avian (bird) origin
First transmitted: 1918–1919. No consensus exists regarding where the virus originated, but it spread worldwide.
Symptoms: Flu symptoms (fever, nausea, aches. diarrhea). Many developed a severe pneumonia attack. Dark spots appeared on cheeks and patients would turn blue from a lack of oxygen as lungs filled with a frothy, bloody substance
Number of cases: About 500 million people (one-third of the world’s population at the time)
Number of deaths: About 50 million
Treatment: Treatments varied from newly developed drugs to oils and herbs. Drugs had no clear explanatory theory of action, and treatment was largely symptomatic, aiming to reduce fever or pain. Acetylsalicylic acid (Aspirin) was a common remedy.

While the 1918 influenza virus has been synthesized and evaluated, the properties that made it so devastating are still not well understood. With no vaccine to protect against infection and no antibiotics to treat secondary bacterial infections associated with flu infections, control efforts worldwide were limited to non-pharmaceutical interventions: isolation, quarantine, good personal hygiene, use of disinfectants, and limitations of public gatherings. The 1918 pandemic did not, as many people believed, originate in Spain.

Q Fever is commonly reported in France and Australia. During the 2007 outbreak, the Dutch government culled more than 50,000 dairy goats on 55 farms to control the spread of the disease. Two percent of infected individuals reported having chronic Q fever in the months to years after symptomatic or asymptomatic infection. Typically Q Fever lasts one to six weeks, with most patients gaining a lifelong immunity to further infection. 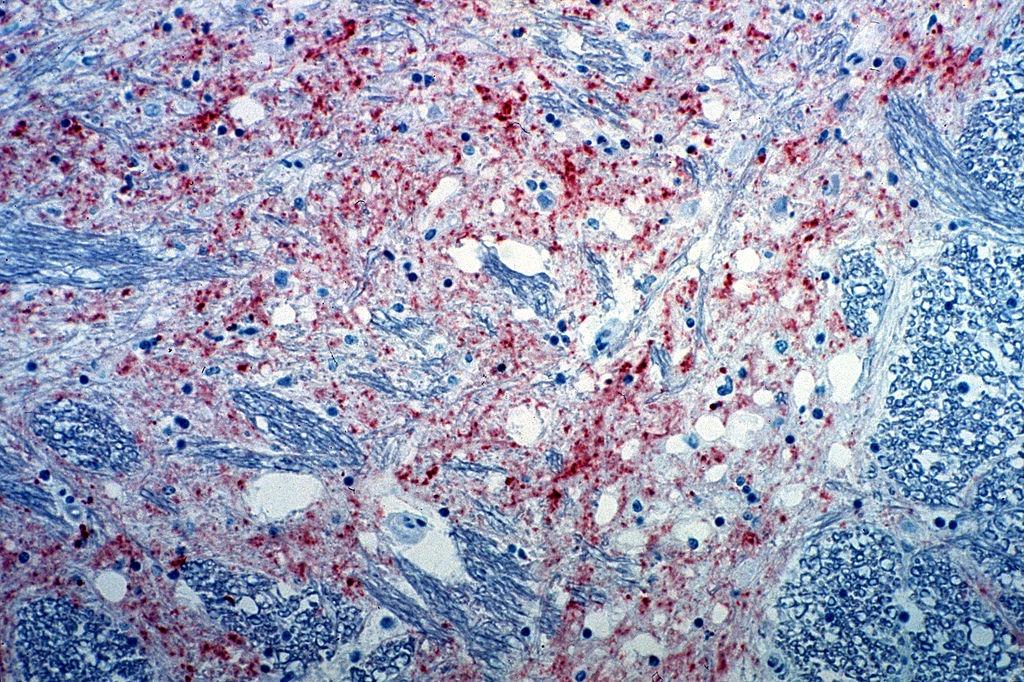 Derived from: Cows (BSE is not transmissible to humans, but see below on the variant CJD)
First transmitted: 1985 in cattle farms in the UK
Symptoms of Creutzfeldt-Jakob disease (CJD): Difficulty walking caused by problems with balance and coordination, slurred speech, numbness or pins and needles in different parts of the body, dizziness, vision problems, such as double vision, hallucination
Number of cases: 1-2 cases per million people annually (roughly 500 annually in the US)
Number of deaths: Between 172 and 561 deaths have occurred annually from 1979 to 2019
Treatment: None, but treatment of symptoms exist

BSE is a neurological disorder in cattle caused by an unusual transmissible agent called a prion. Its cause was animal feed, including meat and bone meal (MBM) from rendered, and in some cases, infected cows. More than 100,000 cattle were confirmed to be infected in the 1970s. MBM was banned in 1988. In 1996, scientists linked BSE to a variant called CJD in humans, which could manifest many years after eating infected meat, lead to painful symptoms, and in a number of cases, cause fatality.

Infected birds shed the avian influenza virus in their saliva, mucus and feces, which occurs naturally throughout the wild bird population. When a three year-old boy died of respiratory failure in Hong Kong in 1997, H5N1 bird flu was initially thought to be viral. It’s transmitted to humans through direct or indirect contact with infected live or dead poultry or contaminated environments such as live bird markets. One year after an outbreak of H5N1 in farmed geese in China led to more than 300 million geese slaughtered to control the disease. H5N1 bird flu is now endemic in poultry populations in Bangladesh, China, Egypt, India, Indonesia, and Vietnam.

Derived from: Mostly pigs, but also horses, goats, sheep, cats and dogs
First transmitted: 1999 in Malaysia, with subsequent outbreaks in Bangladesh and eastern India
Symptoms: Fever, headache, signs of respiratory illness (cough, sore throat, difficulty breathing), brain swelling (encephalitis). Also drowsiness, disorientation and mental confusion, which can rapidly progress to coma
Number of cases: 700 cases as of 2018
Number of deaths: Unknown, but there is a high risk of fatality.
Treatment: None; supportive care, including rest, hydration, and treatment of symptoms. Immunotherapeutic treatments (monoclonal antibody therapies) are currently under development and evaluation.

The initial Nipah virus outbreak in Malaysia saw 105 deaths and led to the culling of almost 1 million animals. Initially thought to be caused by Japanese encephalitis, scientists realized it had jumped from infected pigs to the humans that tended them. Besides inspiring the movie Contagion, NiV can cause acute respiratory infection and fatal encephalitis, with an estimated case fatality rate of 40–75%. 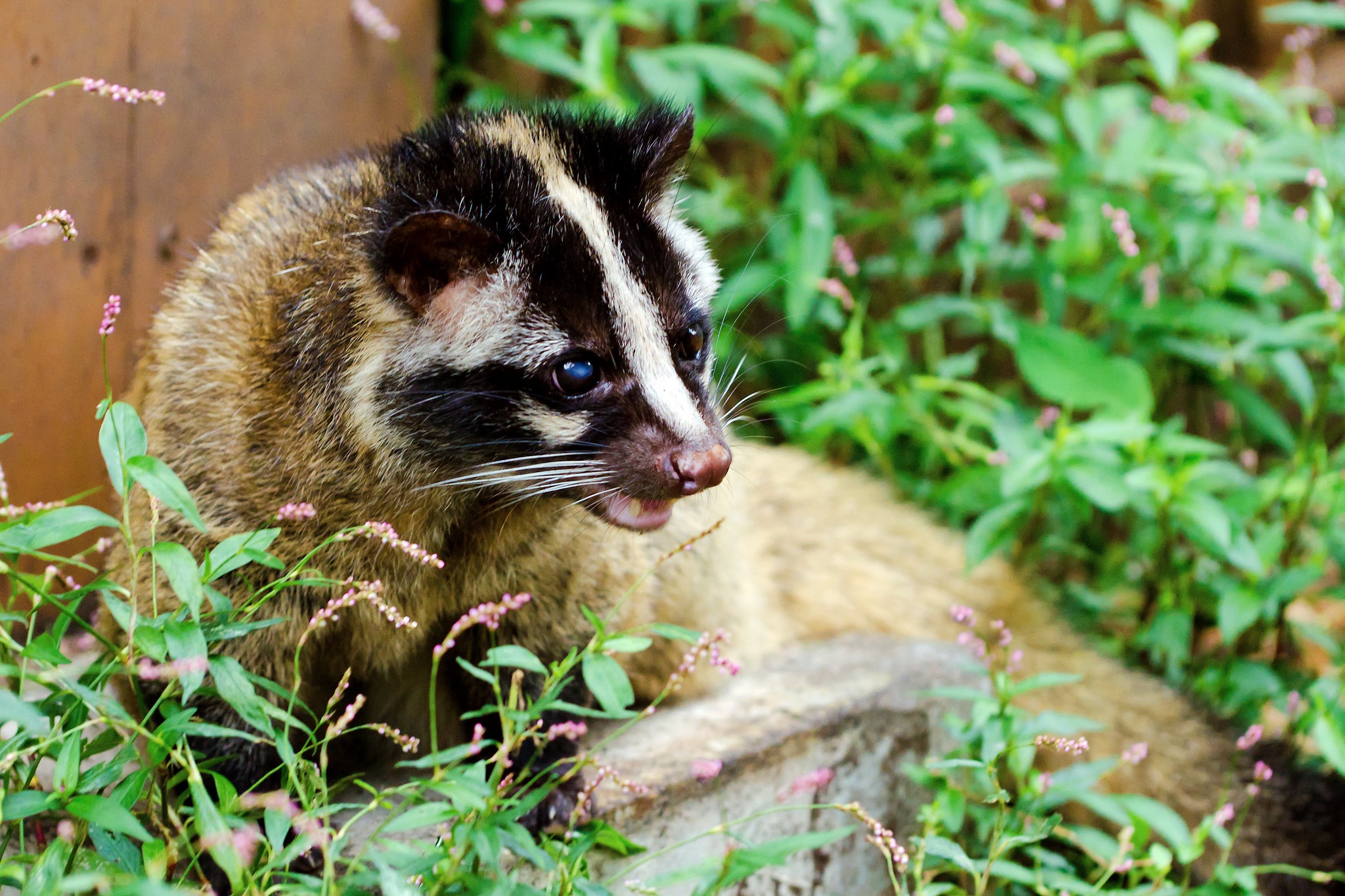 Derived from: Horseshoe bats transmitted to humans through an intermediate host species, masked palm civets farmed and sold in markets in China
First transmitted: 2002 in in Guangdong province of southern China
Symptoms: High fever, headache, feelings of discomfort, body aches, mild respiratory symptoms
Number of cases: Just over 8000
Number of deaths: Close to 800
Treatment: None; supportive care based on the patient’s symptoms

SARS spreads via human contact through infected droplets from a cough or sneeze. There were 8,500 cases before the epidemic was stamped out and thousands of farmed civets were culled. I remember living in Toronto during the start of the SARS outbreak in 2003. That was the first time I saw people wearing masks. When I moved back to Vancouver in late spring, it wasn’t a concern.

Derived from: Poultry
First transmitted: 2003 in Netherlands, with subsequent outbreaks in other countries such as England, China and Spain.
Symptoms: High fever, cough, runny nose, sore throat, muscle aches or pain or headache
Number of cases: Close to 2000
Number of deaths: Less than 400
Treatment: Antiviral medicine

This type of avian influenza came from direct or indirect contact with infected live or dead birds that shed the virus in their saliva, mucus or feces. The WHO believed there may also have been human-to-human transmission. In the Netherlands, the outbreak spread to more than 250 poultry farms and led to a quarter of the country’s flock—30 million birds—being culled. Outbreaks are associated with intensive domestic poultry production.

Earlier strains of the H1N1 virus passed to humans through close contact with infected meat, such as at slaughterhouses. In June 2009, the WHO declared a pandemic. Research has suggested the development of the virus was aided by the live export trade in pigs between the US and Mexico before it eventually jumped to humans and quickly spread to the rest of the world. (My husband believes he had it at one point, but did not get a vaccine.) The majority of deaths have occurred in south-east Asia and Africa.

Derived from: Camels
First transmitted: 2012 in Saudi Arabia. The virus spread to at least 27 countries, including the UK
Symptoms: Fever, cough, shortness of breath
Number of cases: 2,400
Number of deaths: Over 900
Treatment: None, but a vaccine is in development

The emergence of the respiratory illness MERS was linked to rapid growth in the camel population in Saudi Arabia–which are kept for meat and milk–since the 1960s. MERS has a case fatality rate of 35%. 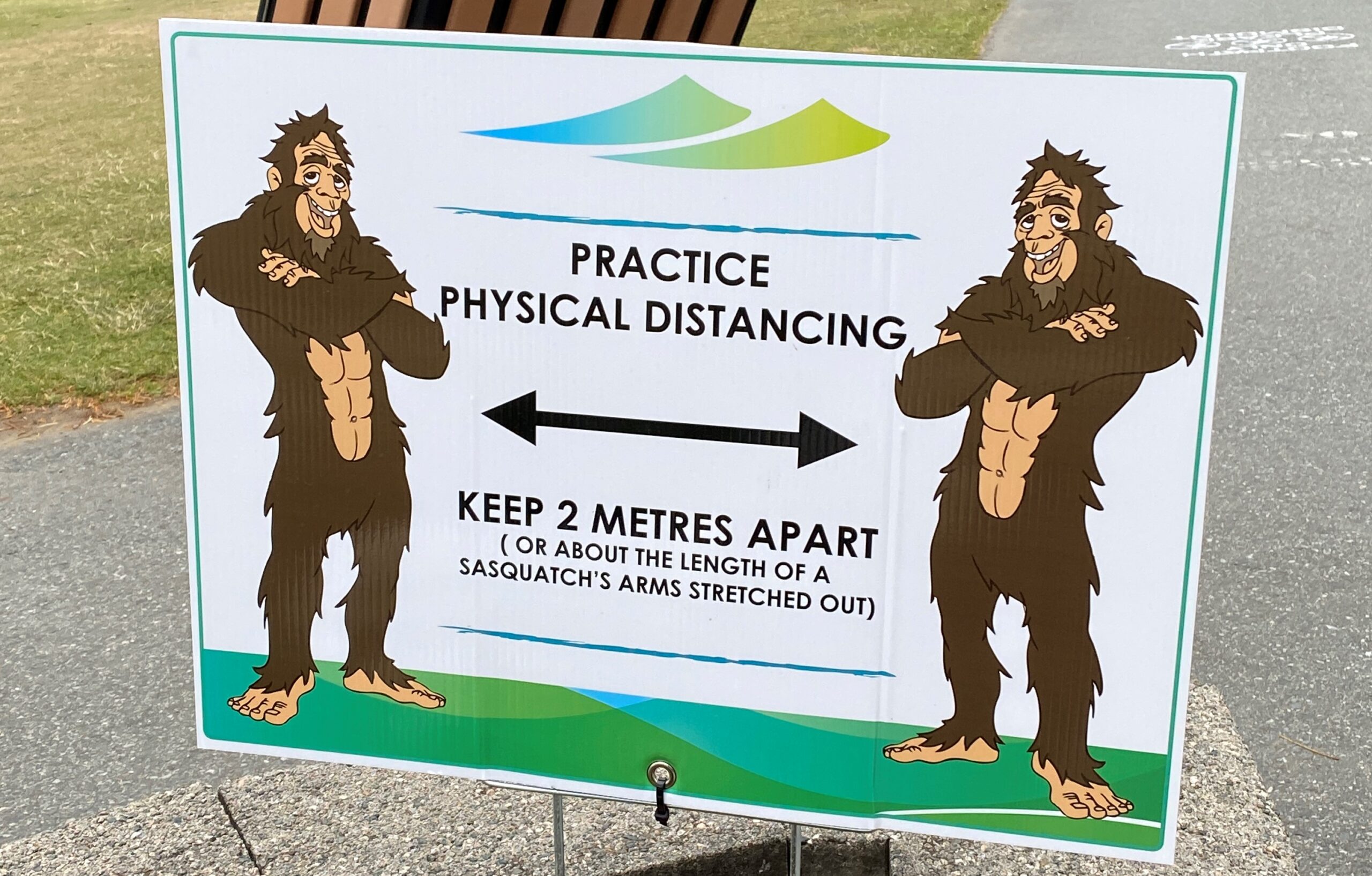 Photo: Taken July 2021 of a sign in Harrison Hot Springs (home of the BC sasquatch), reminding us to distance for COVID-19 safety

Derived from: Unknown, but studies report that transmission from bats to humans through another animal sold at the Huanan seafood wholesale market in Wuhan was likely the origin.
First transmitted: December 2019 in Wuhan, China
Symptoms: Most common: fever, cough, fatigue, and loss or taste or smell. Less common: sore throat, headaches, aches and pains, diarrhea, red/irritated eyes, rashes, discolouration of fingers/toes. Serious symptoms include shortness of breath or difficulty breathing, chest pain, and loss of speech or mobility.
Number of cases: Over 500 million cases as of the time this blog was published
Number of deaths: 6.19 million deaths as of the time this blog was published (see counter here)
Treatment: Vaccines. Hydroxychloroquine has not been shown to offer any benefit for treatment of COVID-19, and WHO does not recommend self-medication with any medicines, including antibiotics.

Coronaviruses are a family of viruses. Some cause cold-like illnesses in people, while others cause illness in animals. Some such as canine and feline coronaviruses only infect animals, not people. In February 2022, scientists released two major studies; one participant said it was “extraordinarily clear” a market in Wuhan, China, was the source of COVID-19, not the Wuhan Institute of Virology, as was a theory. The New York Times published photos of what the animals look like at the Wuhan market.

COVID-19’s death numbers aren’t nearly as many as the 1918 flu pandemic, but we’ve reached the number for cases (and even though we’re not in a race to be the worst pandemic in history, it sure feels like it!).

Even though I’ve lived through a few of these zoonosis-based pandemics, you’ll probably agree the one we’re in has been the worst in recent history—or at least its effects have been felt globally. Though my husband and I haven’t tested positive, hubs believes he may have had COVID-19 in March 2020 which means I may have had it and we’ve both just built immunity to it. Luckily no one in my immediate circle has had severe effects, but one extended uncle passed away from it and I know people whose loved ones passed away. Others I know believe COVID-19 is not that big of a deal as we have lived through many versions of the flu (which also cause deaths) and governments have blown this way out of proportion. The point I want to make here is though, if you could prevent future pandemics, wouldn’t you? Four of the flu-based pandemics listed here plus the other three named by the CDC were all zoonosis-derived. Three of the zoonoses listed here all have a high fatality rate as well.

Yes, COVID-19 and its variants may be a thing of the past soon, but that doesn’t mean future zoonoses are. And I want my descendants and I to live in a world with as few of them as possible.

What are your thoughts on these zoonoses and our chances of experiencing another pandemic? Would this information drive you to eat less animal products or lobby for less interaction with animals? Comment below.

This blog was originally published on April 17, 2022. If you are reading this past this date, please consult the WHO, CDC, or your country’s health authority for up to date information on COVID-19.

Centers for Disease Control and Prevention: