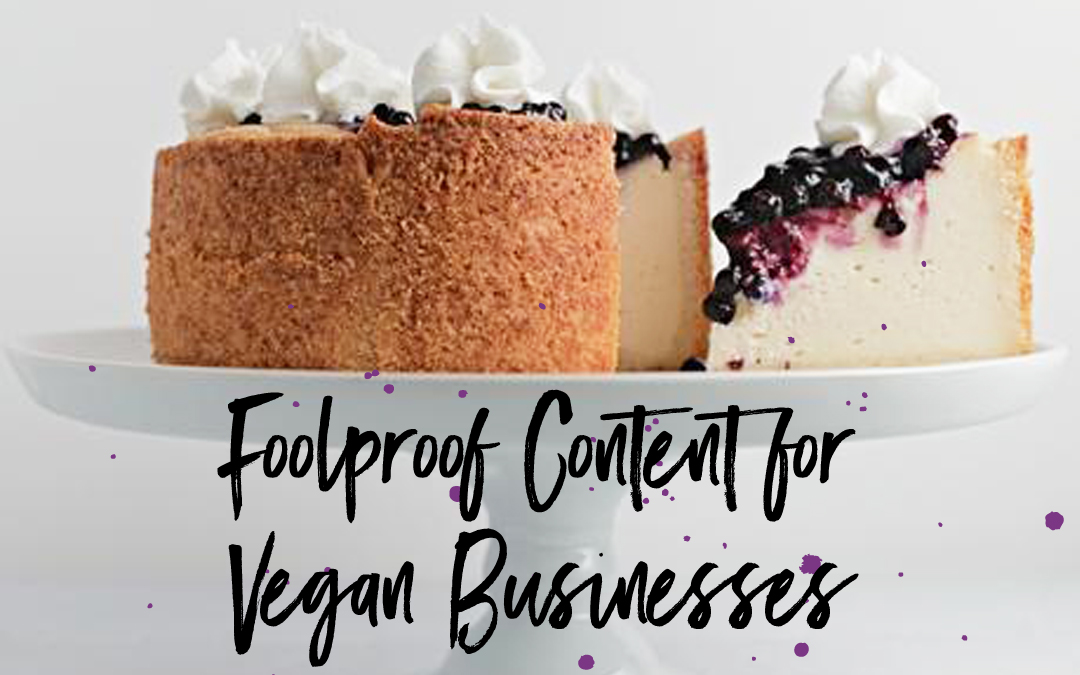 Let’s get right into content ideas for vegan businesses—which are also recommended for any business!

You might think that this one’s just for vegan food businesses like restaurants, chefs, caterers, food bloggers/influencers, or artisans who operate out of a commissary, but this is not true! One of the perks about eating plant-based for ANY professional is that we need to balance out the amount of foodporn that contains meat and dairy, so just by snapping and posting our meals (whether homemade or eating out) we’re sharing that vegan food can be just as appetizing and drool-worthy.

I’ve probably been following Erin Ireland of To Die For Fine Foods the longest–and most of what she posts are her own creations rather than what her company is selling. 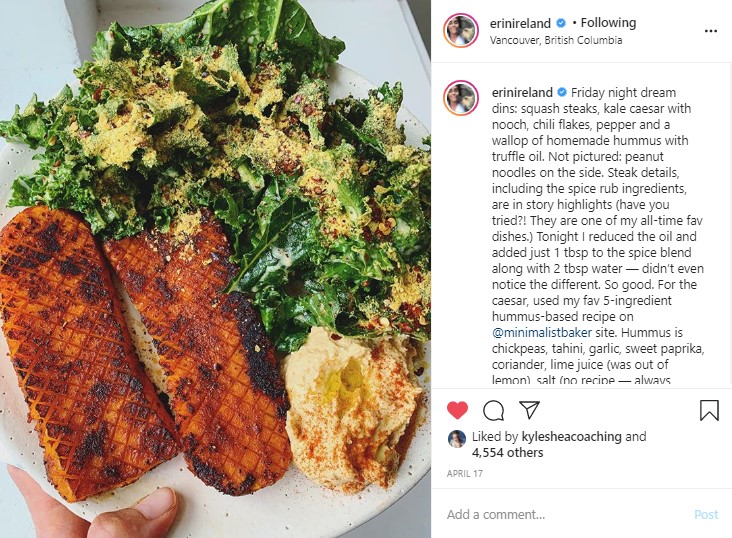 Surprisingly, some food businesses don’t take or post the best photos. You don’t need a professional camera (although many use them), but you will need good lighting and if need be, some practice in using filters or at the very least, adjusting brightness whether on your smartphone or prior to posting on a platform like Instagram. I know that even Twitter has editing capabilities on its mobile app now.

Here’s another example of Level V Bakery, whose founder/head baker Monica consistently puts out amazing photos of her vegan cake creations. Almost always with a very clean, white background, she makes it look so easy. (She just opened her retail bakery along with Whisk Matcha in Vancouver, so go check it out!) 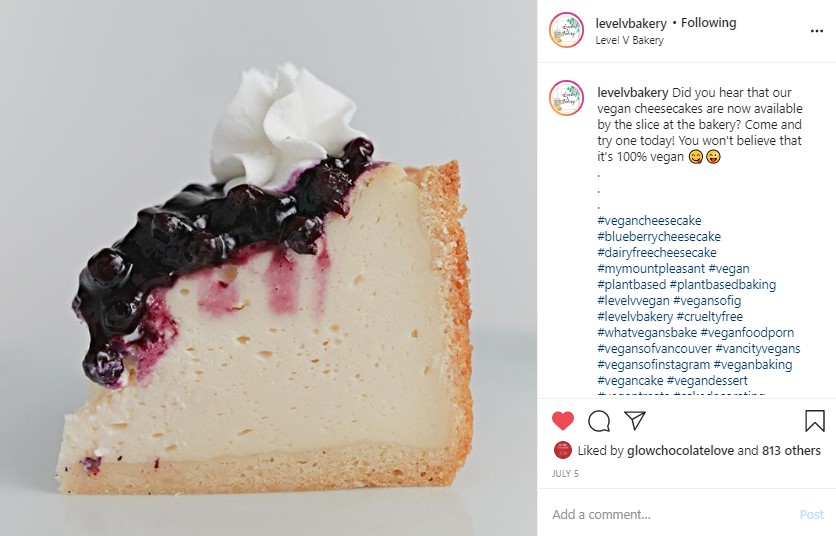 Polls need not be formal market research, or done using an app like Facebook or IG, although the apps are useful. This is simply a way to increase interaction and engagement with your audience, who are your customers/clients! Polls are great for getting creative ideas and allowing your audience to have input in your business.

As I’m writing this blog, I’ve noticed that Facebook has launched a questions feature for personal profiles. It’s probably a matter of time before this is available for business pages, so that could be another way to gather feedback from followers on that platform. See below for what it looks like on a personal profile.

The easiest and quickest function, however, is in Instagram Stories. 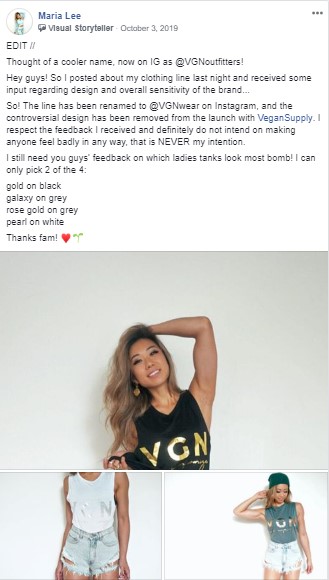 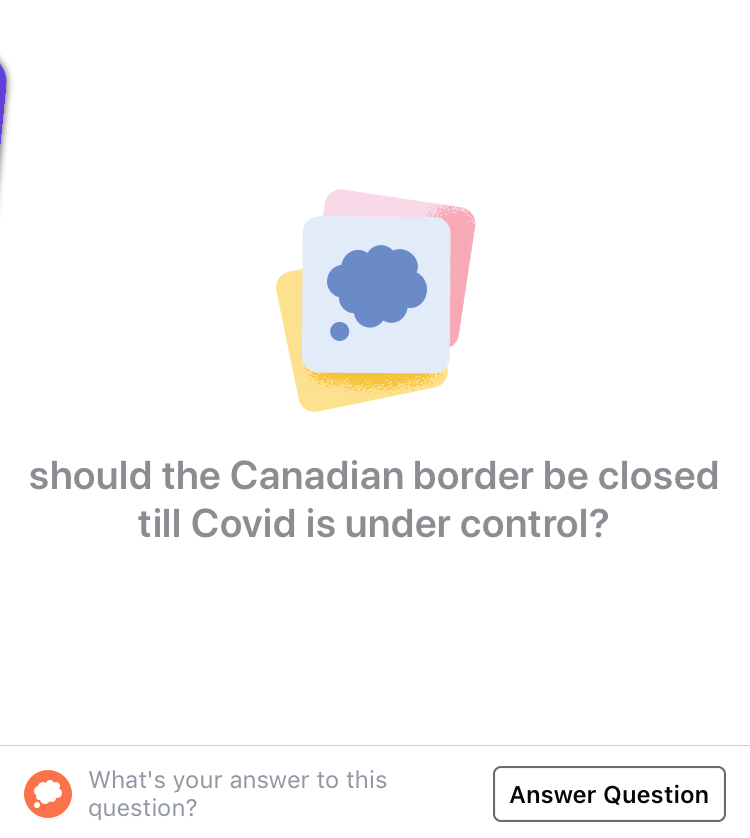 Everyone knows that good quality photos is a GIVEN, especially for product-focused businesses. Even business-to-business (B2B) folks need good headshots.

It’s very easy to use royalty-free stock photos rather than do your own professional shoots if you’re selling a service, but for those who have to hire photographers to take photos of their products, having a diverse range of people can be an easy thing to forget. Remember that MEC scandal in 2018? While you’re investing some good $ into those shoots for your fashion brand, remember to use diverse models (race, size, and age + ability, if applicable) if you can. 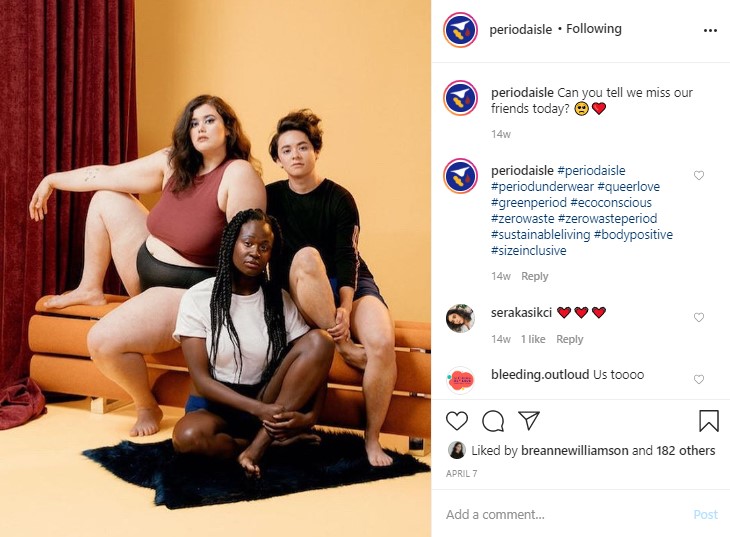 Aisle not only uses models of various sizes and ethnicities, but they were the OG of showcasing non-female-identifying people who still use menstrual products. I’ve been proudly using their products for the last decade, and can attest that their period underwear is sooo comfy!

Native Shoes is another local company that doesn’t even need to tout the fact that it’s vegan. Because they sell products for both kids and adults and all year-round, they KNOW that their audience has to be diverse; their photo content reflects this, and looks like they’re not even trying. That’s how it should be! 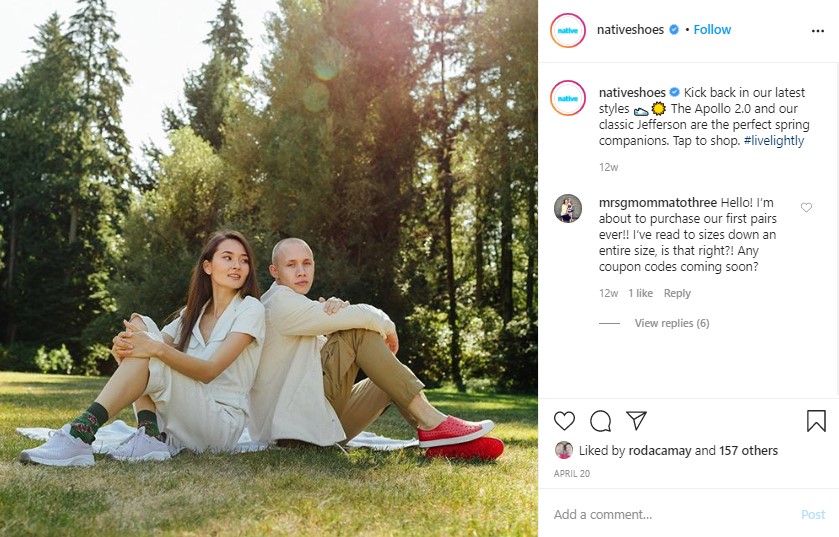 Video is a given, but those of us who are B2B often forget the impact that videos can have and the fact that it’s nice to switch it up between photos every now and then. Videos don’t have to be professionally produced either; they can be promotional, educational, silly, or short (for Stories) and done with a smartphone. Lots of profiles now have Live features as well, for brands that have great speakers who can talk on the fly for a good length (i.e. not me!).

My client Yuko Turnbull, a holistic hair professional, shares not only before/after client do’s, but also tips on wellness and astrology. Here’s a recent video she did on using crystals for protection. I’m all about the gemstones, and even if I am not going to put them in my bra/shoes, to each their own!

Local YouTube influencer and teacher Sunny Lenarduzzi has long been showing us the way for how to do videos. While she’s not vegan, she’s been a lot more raw and honest lately (i.e. no makeup, no fancy backdrops or lighting) and has also been documenting the effect this has been having on her followership. It’s fascinating to observe!

As Gary V always says: “Document, don’t create.” Here’s the first of a series of videos she did on the topic of speaking out against racism and what it’s doing for her algorithm.

What I love about the era we’re moving into is that MORE REAL IS THE DEAL. People know that boyfriends/husbands/sig others take photos of influencers (some of whom have been caught Photoshopping body flaws or using filters to make them look like Barbie dolls from yesteryear). They are getting paid by brands to look “unreal” and making a living doing this. Raw and honest videos (and photos) are now the way to go if you want to authentically engage with your audience.

Before opening her retail location for Level V Bakery, Monica Tang did an intro video about her story (sorry, it’s no longer documented on her Instagram) and I really appreciated that. The more real and accessible a business founder is, the more I want to support them.

Remember, we all don’t look like models when we wake up in the morning.

So this is what I call the “lazy person’s” content, but it absolutely works for the photo-dominant networks when you don’t have the time to do things like Foodporn or pro photo shoots. You have to be a bit creative—or borrow content from others if need be—but so long as you’re on brand and giving credit to the source (if needed), it works!

Since early June, Vancouver’s own vegan cinnamon bun (and other baked goods) maker Flourgirl Baking has been donating a portion of proceeds from the purchase of select products on their menu to local organizations, and showing their receipts.

I was also really impressed when Sunny Lenarduzzi (not a vegan) also showed her donation receipt to BLM on her birthday, which she shares with Breonna Taylor. She has a huge following, so screenshots like this can really go a long way when it comes to positive impact.

Here’s a final example where screenshots of previous correspondence can have a huge impact not just on public relations, but on justice.

You might already know the story about Warner McDaniel, former sales agency for soy candle company Vancouver Candle Co. (VCC). The owner posted a series of text messages on June 6, 2020 that they claimed were from their client from a few years back (the second is dated 2017). *TRIGGER WARNING: these contain obscene language. 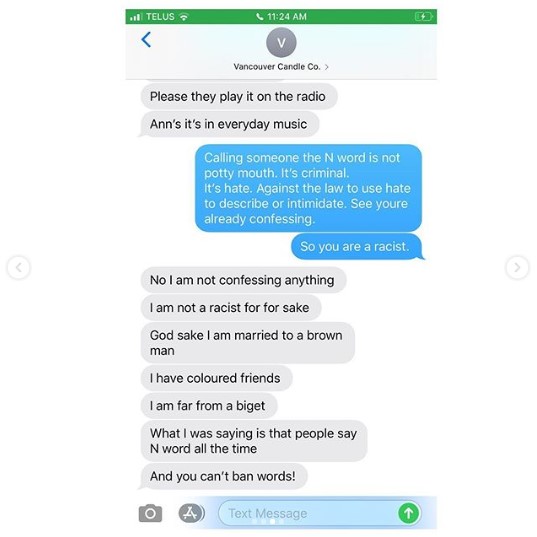 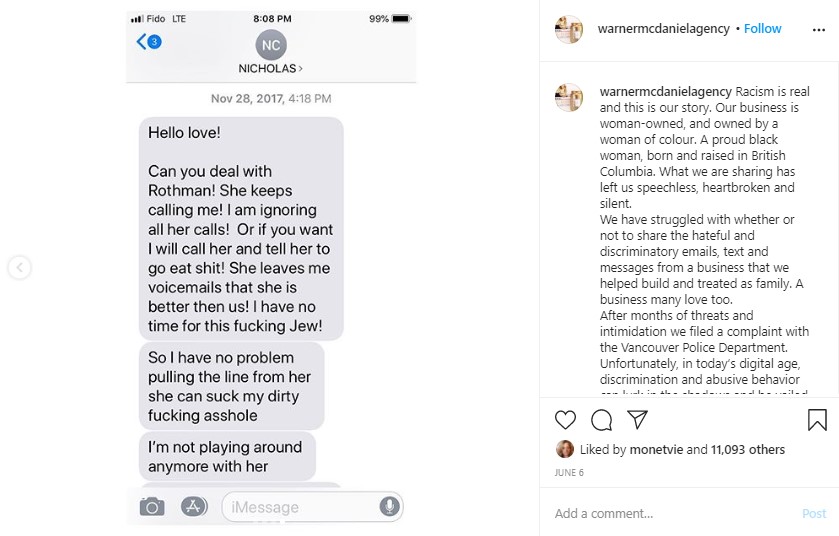 VCC admitted that two of the three messages above were from them, resulting in negative media stories, retailers pulling their line from stores, and an embarrassing—but necessary—public apology on social media. 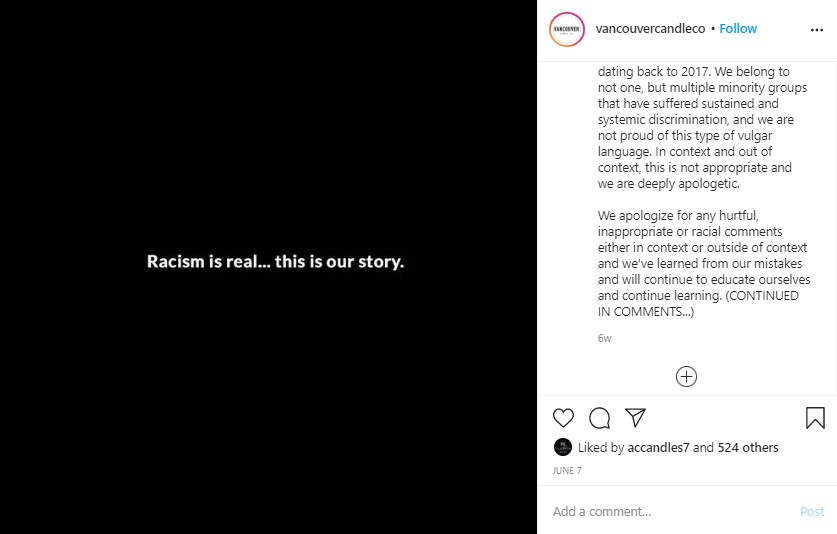 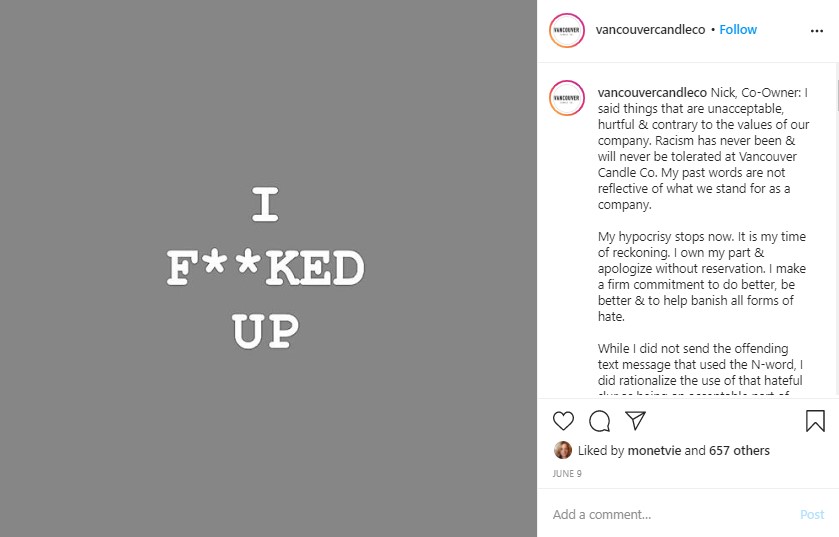 The strange thing about the first post in which VCC acknowledged their mistake, is that they used the very same image that Warner McDaniel posted. It was almost as if they were defending themselves from the attack they knew they would come. It’s never easy to post these kinds of things, but if they were admitting a fault, IMO they should have simply posted “I’m sorry” to begin with. Partner Nick Rabuchin did this in the second post (above) that followed two days later.

Everything is being documented.

Many of us did not grow up digitally, so we’re still learning that our actions have a (visible) impact. Whether it’s sending harmful messages via text or another app, trolling someone in comments, or being caught on video in a public place, there is A LOT of evidence being collected now about our behaviour, good or bad.

Don’t underestimate the impact of screenshots!

If you manage a public aspect of a vegan business, what other foolproof content do you swear by? Share in the comments!

Do you run a vegan business and need a vegan copywriter or editor to help you communicate effectively with your audience? Contact me!