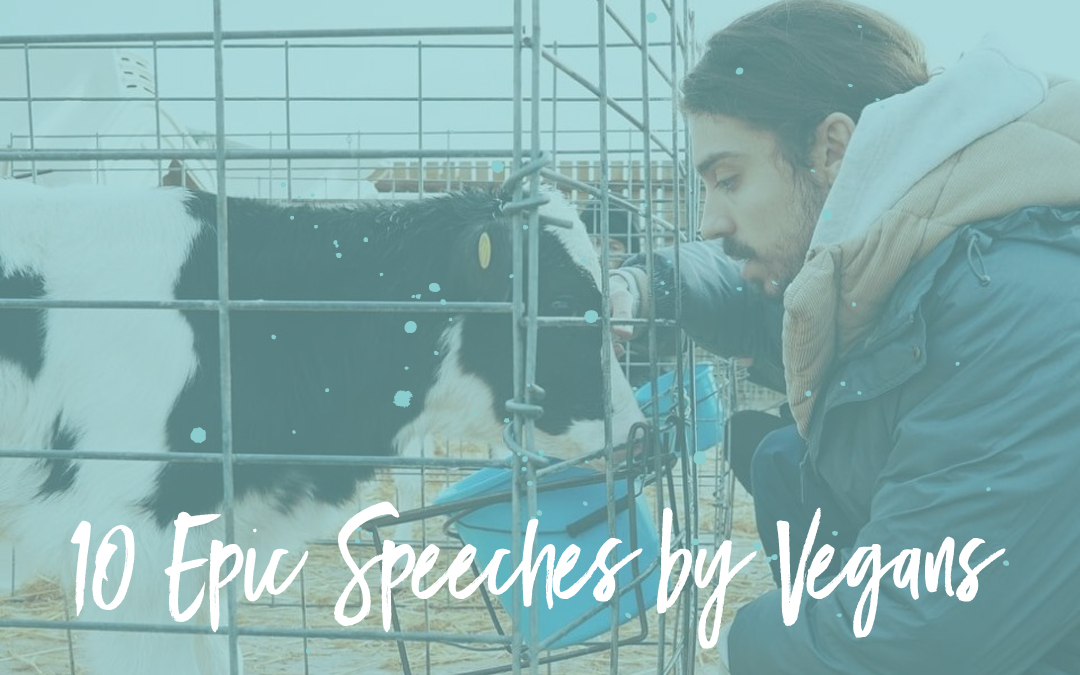 Let me be clear: These are not all talks on veganism. These are epic talks by people who happen to be vegan.

I’ve watched every video here, and vouch that you will learn either: at least one new thing about eating vegan, or something pretty cool about the person speaking.

With a total of four hours of footage and millions of views, I guarantee you won’t be bored. And you can always skip ahead — but you won’t want to!

1. Gary Yourofsky: The most important speech you will ever hear

I had no idea who this Gary guy was when I started watching. Yourofsky’s a long time American activist and lecturer, who was arrested 13 times and spent over two months in prison for releasing 1500+ minks from a Canadian fur farm. He was sponsored by PETA in the early to mid 2000’s and has gone on to give over 2,600 talks globally. I put this talk at number one because it isn’t a TED stage, as you’ll see. It’s a one-hour lecture (not including Q&A) in a regular college/university classroom at Georgia Tech in 2010, and you can put yourself in the place of any of these naive, skeptical students. He answers ALL of the questions (well, almost all, as you’ll see) about going vegan before you even ask them, and his easy-to-understand delivery makes him seem super approachable. I’d hire him to teach me to surf. Dig his lecture? Visit and subscribe to his YouTube channel.

Greta is definitely one of THE COOLEST teens alive right now, and not just cause she’s been on the cover of TIME Magazine (beating out T***p) or has a huge following. She’s just a regular girl who knows what’s up and made a big move to act on her values (with a mental illness, no less). While Greta’s given some pretty epic talks on the climate emergency in front of some very prestigious audiences, her original TEDxStockholm talk from February 2019 is my favourite. She talks about how and why she started striking in the first place. Like any good speaker, she’s got great quotables that stick: “Our house is on fire.” (Yes, literally, it is.) “How dare you?” And at 17, she’s just getting started. I think back to 1990 when I was in second grade and they were teaching us the 3 R’s. If only I knew then that the adults teaching us had no effing idea what they were even doing! Greta doesn’t have a website (yet), but she’s easy to follow on Twitter or Instagram.

3. Earthling Ed: You will never look at your life in the same way again

I f*cking love Earthling Ed. This British educator and content creator isn’t just a great speaker and someone I can see myself having a casual meal with, but he is THE MOST EMOTIONALLY INTELLIGENT DEBATOR I have seen online. He’s known for winning every argument for veganism in under 20 minutes. He ALWAYS keeps his cool, and has an answer for everything. He’ll debate anyone from news anchors and dairy farmers to college students and people on the street harassing vegan activists. He’ll also do more fun video interviews at events like food fairs, where he’ll ask people about eating meat just for taste, and whether they’d consider switching to an alternative. If I’d met Earthling Ed when I was at UBC, I’d probably have started my vegan journey a lot earlier.

Ellen Page is just the cutest, and I didn’t even realize she was Canadian because she’s had such huge roles in American movies (Juno, X-Men 2 and 3, Whip It, Inception). I remember hearing that she was vegan awhile back, but this speech from the 2014 Time to Thrive Conference — during which she comes out as gay — is something. She’s honest, vulnerable, and you just want to hug and share a joint with her afterwards.

James Aspey is another cool Australian activist and speaker who I had the pleasure of seeing at last year’s inaugural Vancouver Vegan Festival. Known for taking a year-long vow of silence and cycling 5000 km across Australia to raise awareness for animals and promote peace, he’s known to become emotional on stage. Like many of the other speakers on this list, he’s got an intriguing story of how he went vegan. And let’s face it (straight ladies): he’s not bad on the eyes, and easy to listen to.

6. Al Gore: The case for optimism on climate change

Albert Gore Jr: Former VP of the USA, venture capital firm partner, author, documentary producer, long time vegan, and relentless climate change speaker. What I really appreciate about Al is that he’s been at it since he wrote An Inconvenient Truth, followed by the documentary movie based on the subject matter in 2006, and its sequel 11 years later in 2017. Despite giving TED Talks on climate change in 2006, 2008, 2009, and 2016 (above), he isn’t sick of speaking, and finds new information and knowledge to share about the crisis. Unlike the bitter and cynical David Suzuki, he always seems optimistic about what can be done. I know that it takes both fact and emotion for people to change, and a good speaker never gives up on their audience.

Are you starting to notice that the coolest people happen to be vegan? Natalie Portman needs no intro: Oscar-winning actor for Black Swan, not to mention Star Wars Episodes I-III, V for Vendetta, Jackie, Thor and Thor: The Dark World, and Harvard University grad! Twelve years after graduating in 2003, Portman gave a really inspiring speech, not only to the Class of 2015, but to the entire campus. Her honest story and approach-ability will give you an ass-kicking anytime you’re feeling down and useless (and we always have those moments!). Other fav fun videos: Her raps on SNL (here’s Natalie’s Rap 2.0) and appearance on Season 6 of Hot Ones. There really isn’t anything she can’t do!

8. Phillip Wollen: Animals should be off the menu debate

Who’s Philip Wollen? That’s exactly what I thought when I first watched this video. And I thought about it again when I was compiling this list. He may seem like just another old white guy behind a podium, but I saved his nine-minute speech from the St James Ethics and the Wheeler Centre debate in Australia in 2012 because it’s damn good. If what I’m reading on Wikipedia is true, the Australian philanthropist was the former VP of Citibank, became vegan, then joined the animal rights movement, conducting intervention programs to rescue abused animals, and funding outreach programs that promote animal welfare. The guy may not be the most famous on this list, but like Gary Yourofsky, you definitely don’t have to be famous to be a great speaker. Of his videos available online, this one’s been viewed over 21 million times on Facebook.

Australian Damien Mander takes a cool, different approach to animal welfare in this TEDxSydney talk. After serving with the Australian Defense Force, he toured Africa in 2009 and his eyes were opened to the criminal networks threatening the survival of rhinos and elephants. He now delivers training to rangers in the field through the International Anti-Poaching Foundation (IAPF), which operates in four countries, among leading many other conservation programs. A tribute to his military experience, Mander’s now known as The Vegan Sniper. Now that’s a f*cking badass title if I’ve ever heard one.

I’d never heard of Cory Booker until he ran for the Democratic Party, and I had no idea he was a vegan. His eating preferences don’t seem to have been an ideal talking point for obvious reasons (animal ag is HUGE in the USA) so I respect Booker for not using it as a campaign tactic. The first African-American U.S. Senator from New Jersey, he served in the role since 2013, and was previously the 36th Mayor of Newark from 2006 to 2013. He went from vegetarian to vegan in 2014 and remains a bachelor (according to Wikipedia). Although this speech starts off a bit slow, it gets good around the five-minute mark. I’d listen to him (and frankly, ANY of the other Democratic candidates for President) anytime over T***p.

Thanks so much to Erin Ireland for her Vegan Resources post that was a huge help with this list! (Definitely check out her TEDxSFU talk on Bias in Food Media.)