Digging into the data of my first Fearlessness Experiment post 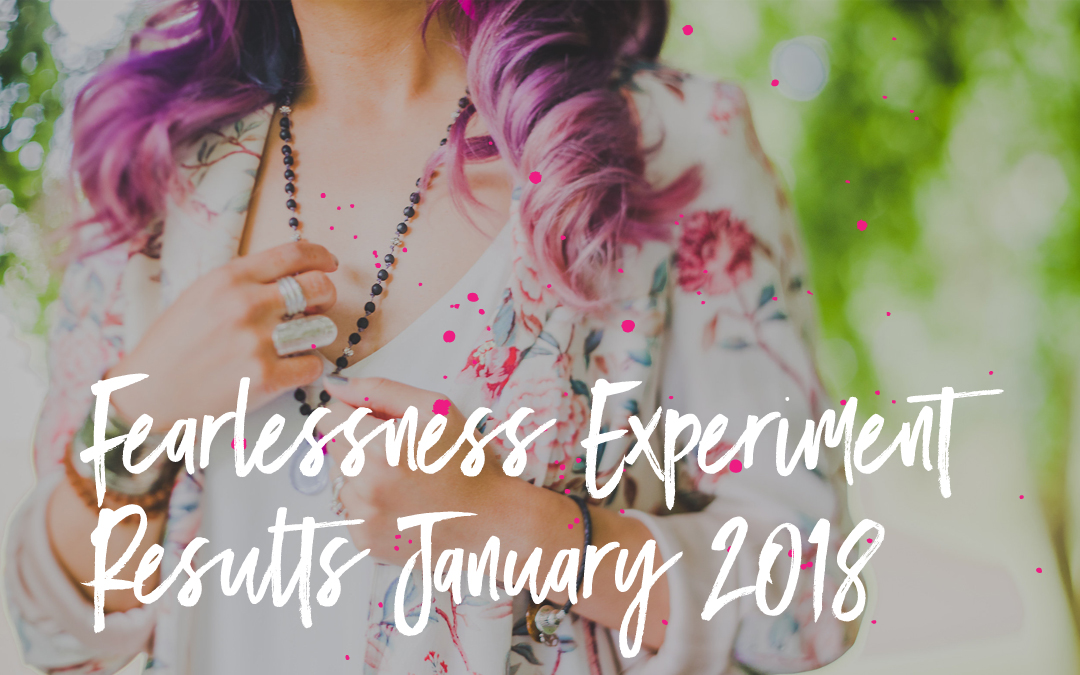 It was the second week of January, during a particularly dark and likely hormonal week, when I thought about this experiment. Which, by the way isn’t scientifically sound nor anything I meant to talk about publicly. I have been taking a new direction in my thoughts on work and life in general, and so it made sense to me that I take what’s probably my only remaining fear in life and try to finally crush it. And that is exposing my numbers (personal financial situation) to the world and one other fact that no one else knows about me. Because even though I have great people around me, they don’t always want or need to know what is going on. I’m a big thinker, and sometimes I think that those thoughts will scare others, even though that’s pretty silly and it’s the experience of sharing that always ends up connecting me with others.

What a better time to do this than the age of social media? I have a bit of a love/hate relationship with social, which is why I thought this would be a good medium for this. I have to be on social for work, and I admire the ability for it to connect with people. I do not like the fact that people only post the best parts of themselves (at least for the most part) and even if you post something publicly, it will not necessarily show in a follower’s feed. So despite those dislikes, it’s probably a good thing that not all of my followers on Instagram and Facebook (around 3000 total) would see this post due to its challenging nature.

I conceived the content for Instagram and Facebook in my mind, created the graphic and text, and then posted on January 31st, when I always (try to) pay my credit card bills and see what’s leftover for the following month. 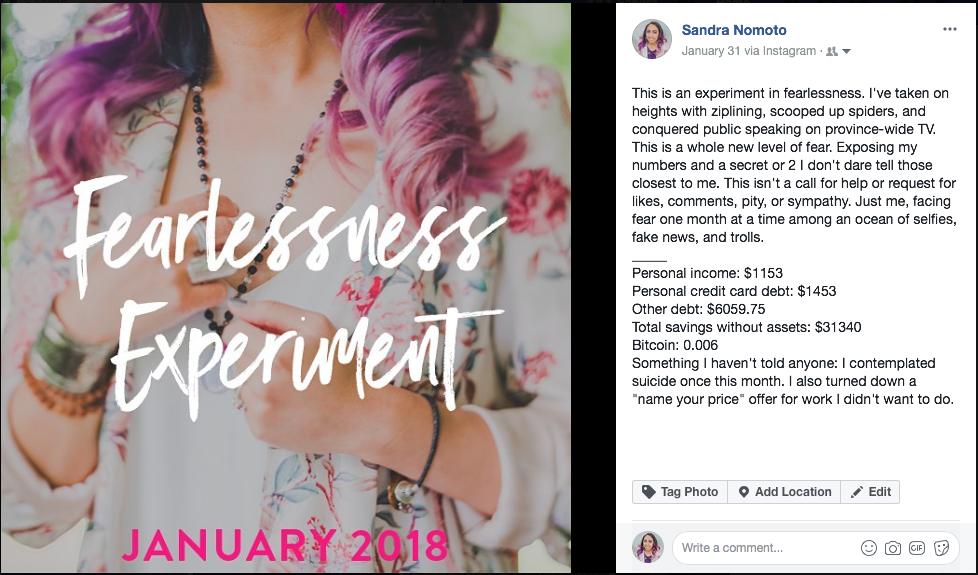 After posting, this is what resulted:

Out of the comments on Instagram, 2 were emoji images, six were well wishes or compliments (two of those containing some sort of advice), and one was a statement. Out of these, it was the one statement that made me feel good because without containing any sort of advice or sympathy, it said that I mattered.

Out of the comments and messages on Facebook, 3 were statements of advice, 17 were well wishes/compliments, one was a statement, and one was a reaction of confusion. Some of the comments from family members close to me warmed my heart and brought tears to my eyes… because I can see how bad they felt for me, and I really didn’t want them to feel that. The confused reaction made me laugh, but also feel slightly guilty for that person’s emotional response. In all honesty I did not think that my mention of suicidal thoughts would elicit such a strong response from people, but I have now learned that the mention of this can trigger a lot of reactions. I am not embarrassed for sharing it. I also received a private message containing advice and though I appreciated the gesture, I really didn’t want unsolicited advice, and this is why the initial results make it difficult to assess the efficacy of this test.

I was naive to think I would not be getting any reactions, and my post clearly stated that the reason for this was to challenge this exposure fear head-on, not receive reactions. However one of the first lessons I have learned is that you cannot expect people not to react to what you post. At first I wished that there were options to disable reactions & comments on social media, but I later realized that without the reactions, I would not be able to measure my emotions. And if I was not able to measure my own emotions, I would not know if the fear of exposure was really gone or not.

I also had a family member reach out to me 5 days after the post, asking to meet the next day. At this time I would not know that the discussion would revolved around my post, but it did. And then I received a kind offer to pay for a stress/anxiety program, which is probably the biggest piece of feedback I have received. I am no stranger to self-dev, although the results of the programs I took over the course of three years were not reliable. I had tried to tackle this fear while in the program, and what happens is that you can end up tackling some problems, but not others. So in this generous offer for a program, I got a very bad feeling in my gut that this was not right for me right now. Because I know that what must happen in order to relieve anxiety or stress is that you have to talk about it and go there emotionally in order to let the energy evaporate. And I know I am not ready for that because I feel like I had already been trying to overcome this scarcity fear for years and one of the reasons for this experiment was to actually tackle fear in a way that was true for me, not be treated by a professional. Also, there is no guarantee that after taking the 2-month program, this particular fear would go away.

It has been just over two weeks since the original post, and I do feel that I have taken one step in conquering the fear. I believe that over time (the experiment will continue on a monthly basis) I will have more data on myself, instead of reactions. If I am able to leave triggering issues out of the secret portion of the experiment, I don’t think I will get as big of a response. And I will expect people to be confused, but I think that will be much better than the positive reactions I have gotten. Because compliments do not equal conquering fear, even though it’s nice to have a cheerleading section by your side.

Have you done any sort of exposure experiment online or offline, and if so did it help you? (Comments are welcome, but please, no advice, haha. 🙂 )