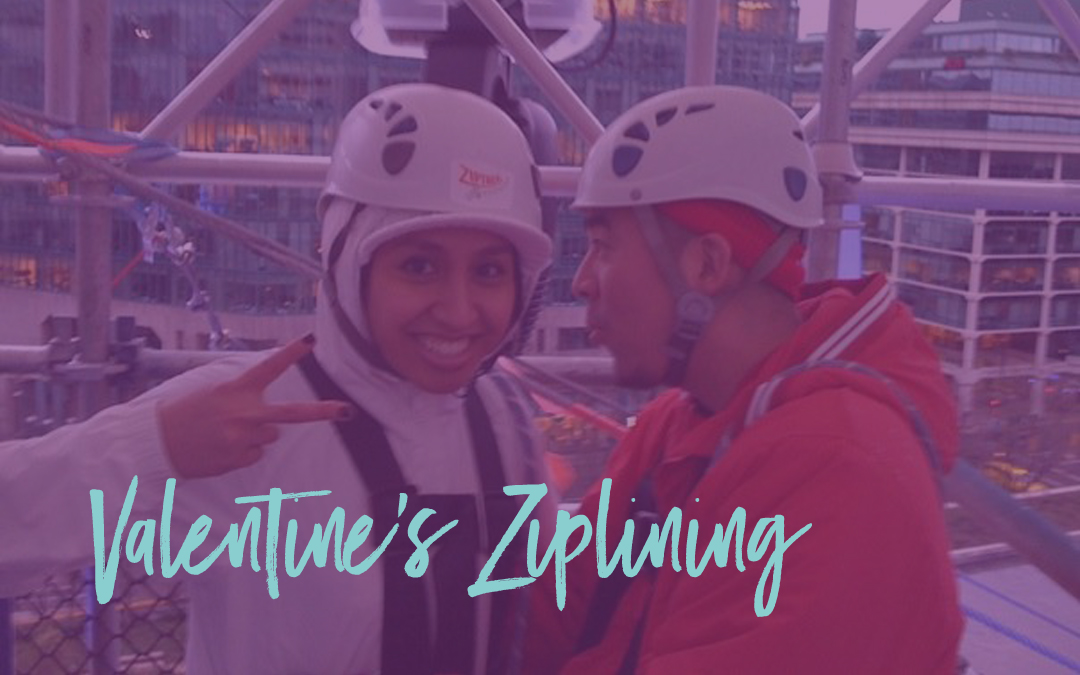 Leo and I took a Skytrain ride downtown to try out the free Zipline put on by Ziptrek EcoTours during the Olympics. We were warned by a friend that the wait was 4 hours long, and they weren’t kidding.

Armed with water and some chips, we lined up with the other 200 or so people in front of us. Only moving about 10 metres in the first hour, it was looking dim. But as the next two hours passed and we made our way through a few BC Tourism videos and people-watching, we got a bit closer to the action. With the start of the zipline well in sight, people got pretty irate if people were slow to launch — there was one kid in particular who wasn’t even able to go down the steps of the launchpad and went only after being pushed by the zipline worker. Total time wasted there was about 4-5 mins.

There were actually some “Estimated waiting time” signs by the 30 min. mark that people were taking photos with, so I decided to do one too. 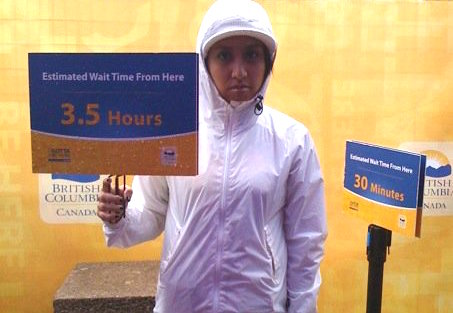 I gotta say both of us could have been a bit better dressed for the outdoors, but we used each other for body heat as much as possible. Finally after 4.5 hours, we got our passes to proceed to the Zip tower.

The climb up was probably the most scariest stairclimb I’ve ever experienced. When I say tower, I really mean scaffolding. If you jumped up and down, the whole tower would likely shake. Of course my legs were too stiff to do anything more than stand.

By the time it was our turn, I was pretty psyched and the adrenaline was pumping hard. I waved to the people down below. Since a few days ago I was determined to “declare bankruptcy” when launching like Michael Scott in The Office. 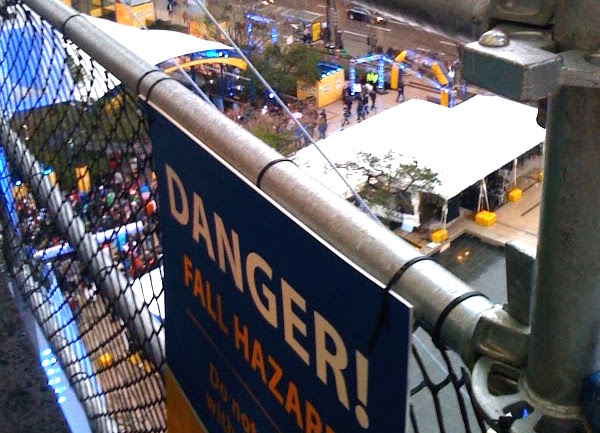 The zipline workers counted us off a 1-2-3-GO but Leo took off after two going on 3. He tends to do that. I was looking at him the whole time on the steps so I wouldn’t have to look down and get freaked out by the height.

With one hand holding onto the harness and my other limbs flailing out, I screamed out the quote and then looked down at the crowd of people who were indeed taking my photo.

It felt so good, I blew kisses to everyone.

Almost 10 seconds later, I could see the landing platform and already I didn’t want it to end.

Afterwards we got 10% off coupons to Ziptrek in Whistler (or New Zealand). I’ve always wanted to go there or up at Grouse so now I have some incentive. And next time, the ride will be a lot longer than 10 seconds and a lot higher than downtown. I want to learn how to go upside down, but I’m not as acrobatic as I used to be.

Afterwards we headed straight to our dinner plans, and were so beat we skipped out on dessert at Sweet Revenge and went home for power naps.

Tomorrow I get to see one of my very best friends Romeo Reyes perform a DJ set and new songs in Yaletown on the main stage (Hamilton & Davie) instead of the white tent that was promised for her performance, so I’m stoked.

The streets and the venues have been crazy with the Olympic spirit, and it’s rubbing off on me pretty hard. This 2-week party is a once in a lifetime experience that we’re paying for, so I’m gonna damn well get my money’s worth!